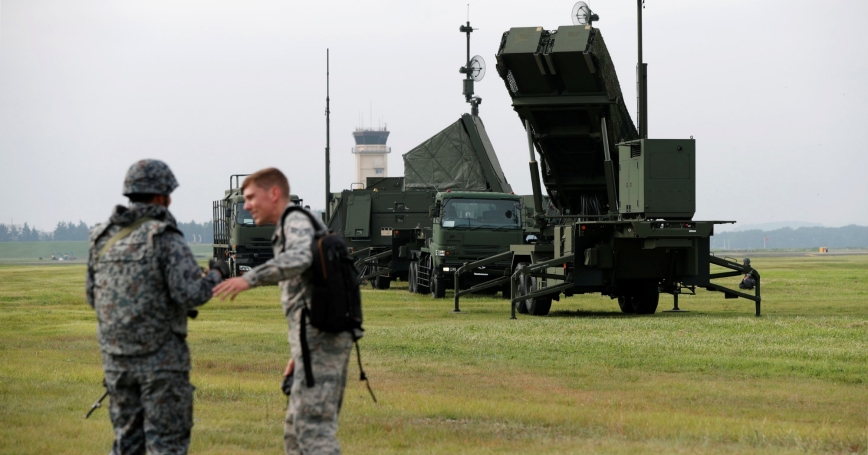 A Japan Self-Defense Forces soldier (L) talks with a U.S. Forces soldier during a drill to mobilise JSDF's PAC-3 missile unit in response to a recent missile launch by North Korea, at U.S. Air Force Yokota Air Base in Fussa on the outskirts of Tokyo, Japan, August 29, 2017

There is a term to describe the mindset of Japanese people who put so much faith in Japan's peace constitution that they are complacent about security threats. They are said to suffer from heiwa-boke. With North Korea demonstrating increasingly sophisticated missiles and threating to sink the country with nuclear weapons, heiwa-boke is a luxury the country can no longer afford. A serious national debate is long overdue about what Japan needs to ensure its survival.

Japan's effort to meet regional missile threats rests largely on a two-tiered ballistic missile defense, or BMD, system. The sea-based tier consists of destroyers equipped to intercept missiles in midcourse, outside the earth's atmosphere. The land-based tier consists of Patriot missile batteries designed to intercept missiles in their terminal phase. Overall, Japan's BMD system is advanced, but there are limits to what it can do. According to unclassified sources, the PAC-3 interceptors that Japan deploys in its Patriot systems have a range of about 12.5 miles, making them useful only if they happen to be placed quite near an incoming missile's target. The destroyers and their Aegis combat systems, by contrast, can potentially protect the entire country, but the ships must be in the right place at the right time. Whether any of this covers a specific area in Japan depends on when and where the missile drops. Worst of all—for the U.S. and consequently Japan's value for regional missile defense—the missiles North Korea fired in August and September over Hokkaido flew at a speed and lofted trajectory that put them out of reach of Japan's BMD completely.

To fill in the gaps, Japan could proceed with plans to purchase the land-based Aegis Ashore system and deploy more advanced missile interceptors for Japan's sea-based and land-based systems, adding range, altitude and accuracy. While these capabilities would not protect all 127 million Japanese, especially if North Korea fires multiple missiles or uses multiple independently targetable reentry vehicles, it would provide a much better chance at interception than the current system....

Based in Washington, Jeffrey Hornung is a political scientist at the nonprofit, nonpartisan RAND Corporation.

This commentary originally appeared on Defense One on October 23, 2017. Commentary gives RAND researchers a platform to convey insights based on their professional expertise and often on their peer-reviewed research and analysis.