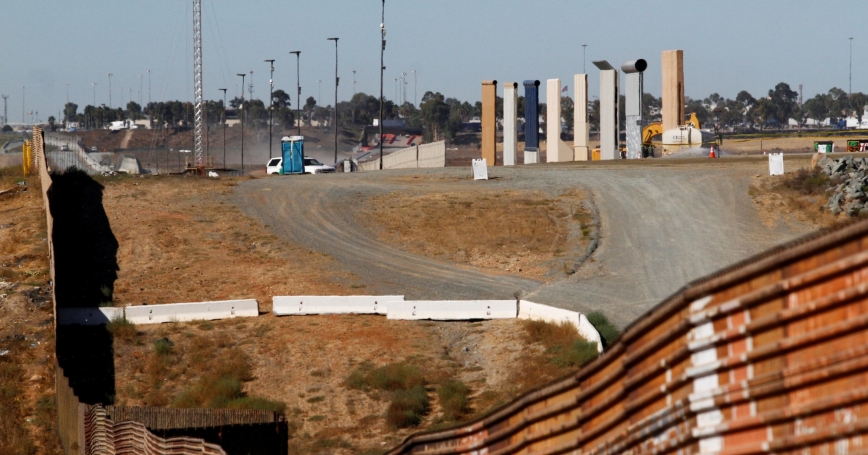 Prototypes for a U.S. border wall are shown near completion behind the current border fence near Tijuana, Mexico, October 23, 2017

What does a secure land border look like? This is a key issue that Congress will be debating this fall, and one that has bedeviled policymakers since well before the devastation of 9/11. The government's inability to definitively answer this question has left the United States trapped in a vicious cycle, where every decade the perception that the border with Mexico is not secure enough leads Congress to invest heavily in resources on the border—with mixed results.

In the early 1990s, Americans recoiled at videos showing illegal immigrants “bum rushing” the border in order to overwhelm the agents positioned to try to stop them. Then-President Clinton tripled the size of the Border Patrol—from 3,000 to more than 9,000 agents—and began erecting fencing in San Diego and El Paso. A little more than a decade later, President Bush again doubled the number of agents assigned to the border and constructed more than 670 miles of pedestrian and vehicle fencing on the southwest border. And now, roughly 10 years later, President Trump has signed executive orders calling for 5,000 additional Border Patrol agents and authorizing the construction of a border wall.

The nature, scope, and scale of illegal immigration has changed since America began heavily investing in the security of its land border.

Lost in this debate is the fact that the nature, scope, and scale of illegal immigration has changed substantially since the United States began heavily investing in the security of its land border. In 2000, Border Patrol agents apprehended more than 1.6 million people attempting to cross the border illegally. Roughly 97 percent of these people were Mexican nationals, and less than 50,000 came from other countries “other than Mexico.” Since then, illegal immigration from Mexico has fallen dramatically, with Border Patrol agents apprehending less than 200,000 Mexicans trying to enter illegally last fiscal year, its lowest point in decades and perhaps ever. Over this same period, however, illegal immigration from Central America has substantially increased. In fiscal year 2014, Border Patrol agents apprehended more people from Central America than Mexico for the first time in its history, a feat that was repeated in fiscal year 2016.

One key difference today is that many people coming from Central America are not trying to evade detection at the border—they are instead seeking out border officials, surrendering and claiming asylum, a process that can take years to be fully adjudicated by the immigration court system. In fact, the majority of these Central Americans have been unaccompanied children and family units—populations that require special processing by border authorities.

Another recent trend has been a steady increase in migrants from outside the Western Hemisphere using international human smuggling networks to fly into countries in South America, then traversing the long but well-worn path north through Panama and Central America to the U.S. border with Mexico. They also generally turn themselves in to claim asylum. There is no evidence to date that terrorists have tried to use these networks to come to the United States, but the emergence and growth of these sophisticated international human smuggling networks is concerning.

Investments in walls and additional agents may not be the most cost-effective use of taxpayer money.

What does this mean for security along the border? The changing nature of illegal immigration—including the increase in individuals surrendering to the authorities in order to claim asylum and enter the immigration court system—suggests that investments in walls and additional agents may not represent the most cost-effective use of taxpayer money. Instead, perhaps Congress and the administration should review the immigration court system and the asylum process, and invest in increasing the authorities' ability to humanely process individuals who claim fear in a timely manner.

Another option Congress could consider is empowering the Department of Homeland Security with new, robust legislative authorities to work with Mexico and other countries on the route north to improve their immigration and border control systems. It costs the United States far more to apprehend, process, detain, and remove individuals after they arrive at the border than it would to provide foreign assistance to countries along the transit route to do it instead in order to increase their own security and to help the United States. It is also more humane, as these migrants are systematically exposed to horrendous physical, sexual, and mental abuse on their journey north.

Lastly, the administration and Congress would be wise to create a realistic goal for securing the land border. Operational control—or the ability to respond to every single illegal entry—is neither a realistic nor cost-effective goal given the daunting geography of the U.S. land border. A more realistic goal may be to require domain awareness—or the ability to detect all illegal entries in order to more effectively marshal limited resources. You cannot stop what you cannot see, after all.

This commentary originally appeared on U.S. News & World Report on November 13, 2017. Commentary gives RAND researchers a platform to convey insights based on their professional expertise and often on their peer-reviewed research and analysis.