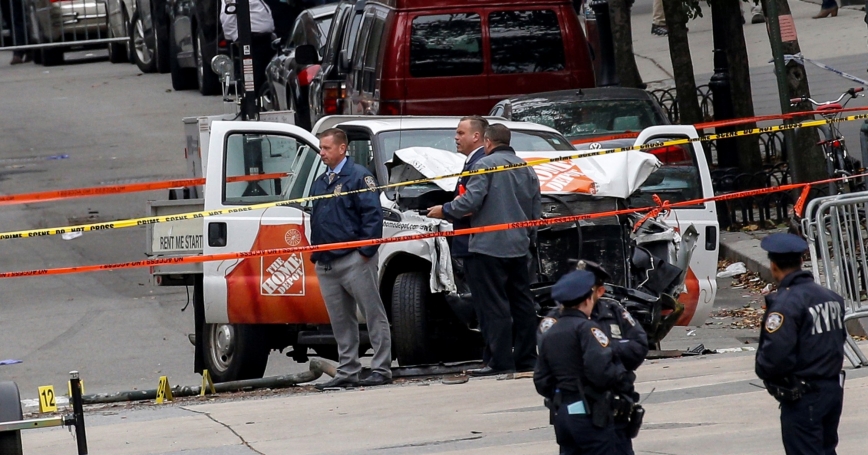 Police investigate a pickup truck used in an attack on the West Side Highway in lower Manhattan in New York City, November 1, 2017

Until Tuesday, the United States had escaped the grisly scenes of carnage visited upon several cities in Europe over the past year from a rash of vehicle attacks. But on a sunny Halloween afternoon, Sayfullo Saipov, a 29-year-old Uzbek immigrant who obtained the status of legal permanent resident in the U.S. after arriving in 2010, plowed a Home Depot rental truck into a crowded bike path full of pedestrians in downtown Manhattan.

Eight people are dead and more than a dozen are reported injured. The suspect exited the vehicle then brandished a pellet gun and a paintball gun before being shot in the stomach and detained by police.

The attack hit home for me personally, as a native New Yorker and someone who spent his first five years after college working and attending graduate school in New York. The attack took place mere blocks from where I first began studying terrorism in a master's program at New York University.

The truth is, the New York Police Department, commonly referred to as the NYPD, is one of the most professional and well-resourced police departments in the world. After the attacks of Sept. 11, 2001, the NYPD began deploying officers overseas in countries such as Israel and India where they studied the tactics, techniques and procedures employed by terrorist groups around the globe.

But vehicle attacks are notoriously difficult to defend against, as I wrote in The Globe and Mail following the mid-August attacks on the crowded tourist destination of Las Ramblas in Barcelona, Spain. New York has already taken measures against this tactic in parts of the city, including Midtown Manhattan, where a sea of pedestrians pass through each day.

Tuesday's attack was the deadliest terror attack on New York since 9/11. But it was far from the first attempt since then. For many reasons, New York remains an attractive target. In 2009, an Afghan immigrant named Najibullah Zazi was arrested for plotting suicide bombings on the New York subway system. A year later, Faisal Shahzad, a Pakistani-American citizen, was arrested for attempting to detonate a vehicle-borne improvised explosive device in Times Square. Last year, Ahmad Khan Rahami was found responsible for several serial bombings in New York and New Jersey.

Now a vehicle attack has finally been deployed in a city of eight million people. It is nearly impossible to guard against such an attack. Handwritten notes indicating allegiance to Islamic State were found near the vehicle. And police on Wednesday said the accused “did this in the name of ISIS.”

Now that the Islamic State has been ejected from its headquarters in Raqqa, Syria, effectively ending the group's goal of sustaining a caliphate in the heart of the Middle East, it is possible that the group's supporters around the globe will attempt to conduct attacks in its name, in a deranged attempt to demonstrate the continuing potency and relevance of IS.

Indeed, for many of its surviving fighters, which number between 6,000 and 10,000, the fight is not over. Many of these militants will almost certainly move on to new battlefields to continue waging jihad. As New Yorker columnist and Middle East expert Robin Wright recently commented, “hundreds of jihadis are believed to be searching for new battlefields or refuge in Muslim countries.”

In the United States, the greater threat emanates from people who are already in the country.

But in the United States, the greater threat emanates from people who are already in the country, sometimes referred to as homegrown violent extremists. Tuesday's attack in New York underscores this point.

In the 16-plus years between 9/11 and Tuesday's attack, 95 Americans had perished in jihadist-related attacks in the homeland; 63 of those deaths occurred during just two attacks — in San Bernardino, Calif., and Orlando, Fla. According to a recent report on radicalization and jihadist attacks in the West, of the 17 successful attacks linked to jihadist terrorists in the United States between June 2014 and June 2017, none were perpetrated by foreign fighters.

The FBI is conducting investigations on approximately 1,000 potential homegrown violent extremists across all 50 states. As ISIS continues to lose territory, it will likely seek to emphasize high-profile attacks in an attempt to remain relevant and demonstrate capability in the face of severe adversity. This could result in an uptick in lone-wolf attacks in the West, including in the United States.

Preventing each and every attack is unrealistic — there are too many individuals wishing to inflict harm upon their fellow citizens and too many targets to protect. But with increased vigilance, cooperation with law enforcement and intelligence sharing, citizens can work with authorities to help mitigate the threat of terrorism, while recognizing that, because of its symbolic and cultural significance, New York will always remain in the terrorists' crosshairs.

Unfortunately, the people of New York already know that all too well.

Colin P. Clarke is a political scientist at the non-profit, non-partisan RAND Corporation. He is also an associate fellow at the International Centre for Counter-Terrorism (ICCT)-The Hague.

This commentary originally appeared on The Globe and Mail on November 1, 2017. Commentary gives RAND researchers a platform to convey insights based on their professional expertise and often on their peer-reviewed research and analysis.