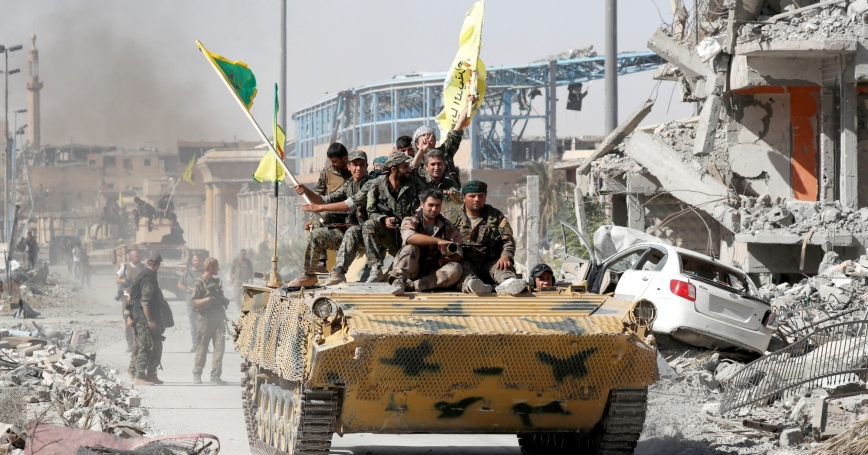 In October, Iraqi, Syrian, and coalition forces celebrated the fall of Raqqa, one of the most important, and final, areas under ISIS control. However, despite this significant loss of territory in the self-proclaimed “caliphate,” ISIS has proven remarkably adaptable and resilient.

ISIS could continue to present a grave threat to the West for three reasons. First, individuals may continue to perpetrate simplistic terrorist attacks outside the conflict zone in the name of ISIS. Second, a number of potential ISIS perpetrators are not on the radar of security services in the West, particularly foreign fighters that could return to their countries of origin from Iraq and Syria. Finally, ISIS could regroup and recuperate in Africa, as parts of the continent are vulnerable to terrorism.

ISIS still retains influence over a number of terrorist cells and followers, making it likely that the group will seek to perpetrate more terrorist attacks outside of Syria and Iraq. A worrying trend is the extreme simplicity of the vast majority of these attacks, which use rudimentary tactics. A recent investigation by the Counter Extremism Project highlighted the growing use of vehicles as weapons of terror attacks: since 2006, 33 vehicular terrorist attacks occurred, killing a total of 186 people and injuring at least 1,034 others. Seven have occurred in 2017 alone, including the recent attack in New York City.

Stabbings are another worrying terrorist phenomenon; with the group's magazine Rumiyah, actively inciting the use of knives and even offering sympathizers advice on the best regions of the human body to target. This was demonstrated through the Westminster and London Bridge attacks, which both involved the fatal stabbings of innocent civilians. Identifying, preventing, and effectively responding to these types of attacks are likely to continue to be difficult tasks for Western policymakers and security forces.

In the UK alone, intelligence offices at MI5 estimated that there are 23,000 jihadists in the country.

This is a task made even more complicated by the fact that many potential perpetrators in Western countries are difficult to identify. In fact, many are not even on the radar of the security services. In the UK alone, intelligence offices at MI5 estimated that there are 23,000 jihadists in the country. The UK Security Services estimate that 3,000 pose an active threat to the UK and are under investigation or monitoring. The remaining 20,000 have been investigated in previous inquiries or are judged to be a residual risk.

Returning foreign fighters present another challenge for Western security. It is estimated that about 40 Americans are fighting for ISIS in Iraq and Syria. In comparison, it was estimated that in 2017 that 850 British citizens had joined ISIS or other jihadi groups, such as al-Nusra Front. According to figures disclosed by the Home Office in 2016, only one in eight returning foreign fighters are caught and convicted. The return of highly trained fighters to their countries of origin could result in additional attacks in the West.

Looking beyond Europe, the United States, and the Middle East, ISIS has taken clear advantage of the complex challenges in Africa. Poverty, corruption, and poor governance make the continent an ideal ground for an ISIS sanctuary, from which the group can launch a renaissance. The group has already received a pledge of allegiance from Boko Haram in Nigeria, rebranding the country as “Islamic State in West Africa Province.” ISIS has further established “Islamic State in the Greater Sahara,” taking advantage of Africa's migration hub, which has since claimed responsibility for several attacks in Burkina Faso as well as an assault on a high security prison in Niger. The group is also active in Tunisia, Libya, and Egypt. As its presence in Iraq and Syria has shown, the group thrives in countries suffering civil unrest, poor governance, racial tensions, and poverty.

Additionally, in the Middle East, the void left by ISIS could make Syria vulnerable to the growing influence of Iran and Hezbollah. Iran has long assisted Shi'a militias in the Syrian civil war, providing arms and material support. In a 2014 country report, the United States accused the Quds force, a special operations force of the Iranian Revolutionary Guards Corps, of being involved in several intelligence operations in Syria and Iraq and creating instability in the Middle East.

A Syria and Iraq free of ISIS do not, unfortunately, free the West from the ISIS threat. Instead, ISIS is likely to either disperse, with its followers prepared to carry out a range of further attacks, or attempt to regroup and recuperate in the fragile states of Africa. Overall, the fall of the caliphate is likely to present more security concerns for the West, with the ISIS threat unlikely to abate any time soon.

Antonia Ward is an analyst at RAND Europe. Her research interests include counterterrorism, countering violent extremism, and intelligence.

This commentary originally appeared on Georgetown Security Studies Review on November 2, 2017. Commentary gives RAND researchers a platform to convey insights based on their professional expertise and often on their peer-reviewed research and analysis.