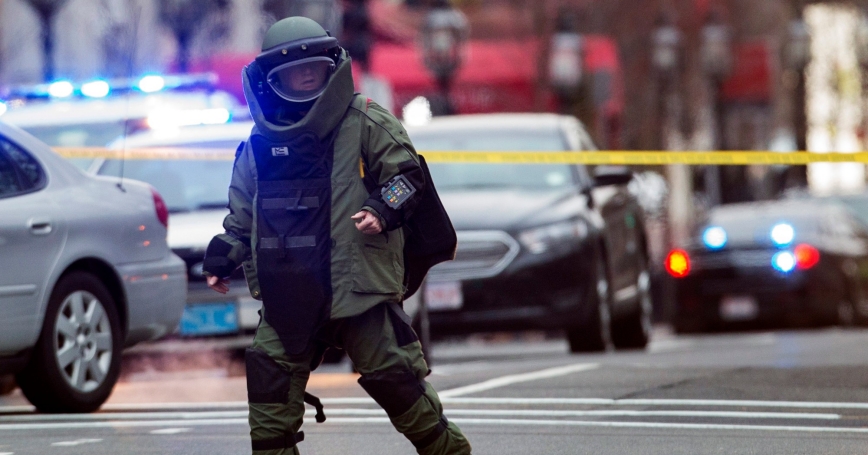 A bomb technician after preparing a controlled detonation during a search for a suspect in the Boston Marathon bombing, in Watertown, Massachusetts April 19, 2013.

American jihadists are made in the United States, not imported. Homegrown terrorists have accounted for most of the jihadist activity in this country since 9/11. Nearly half of those who carried out or plotted terrorist attacks were born here. And most of those who were born abroad arrived in the United States as children. They would not join the armed jihad for many years.

This partial portrait of “jidahism” in the U.S. springs from my just-published research for the RAND Corporation. The report examines the backgrounds of the 178 people who have participated in the 20 domestic jihadist attacks or who were arrested for participating in one of the 86 plots aimed at carrying out jihadist terrorist attacks in the United States since Sept. 11, 2001. The numbers are current through May 2017.

Whether most of these terrorists come from abroad or are homegrown carries policy implications. Concerns about terrorist infiltrators can lead to calls for tighter border controls, travel restrictions and thorough vetting to keep out jihadists. Homegrown terrorism could result in domestic efforts to impede terrorist recruiting in the community and on the internet.

The number of actual and would-be jihadist terrorists in the U.S. is relatively small, which is good news. Efforts by jihadist terrorist organizations to inspire terrorist attacks in the United States have seldom been successful. American Muslims appear to be unreceptive to the violent ideologies promoted by Al Qaeda and the Islamic State. Public opinion polls conducted by the Pew Research Center show a small percentage of U.S. Muslims express favorable views of the terrorist tactics, but expressions of support for political violence have not translated into a willingness to engage in violence.

Except for a shared ideology, most of the attacks and plots are unconnected. Unlike the terrorist bombers of the 1970s, no American jihadist group has emerged to sustain a terrorist campaign. There is no evidence of an organized jihadist underground, no army of sleepers, no American intifada, just an occasional isolated plot or attack.

Of the 178 jihadist plotters and perpetrators, 86 were U.S.-born citizens. The others were naturalized U.S. citizens or legal permanent residents.

Of the 178 jihadist plotters and perpetrators, 86 were U.S.-born citizens. The others were naturalized U.S. citizens or legal permanent residents—people who had long residencies in the United States before arrest. One more was a U.S. citizen, but it is unclear whether he was born here or naturalized.

Only eight of the 178 terrorist attackers and plotters were in the United States on temporary visas, three were asylum seekers, four had been brought into the country illegally as children, and two were refugees. Three foreigners were participants in a domestic plot to attack John F. Kennedy International Airport, but did not enter the United States. The status of the remaining few is unknown.

Vetting those who enter the United States is a necessity that merits constant review, but the system does not appear to be broken. It is a needles-in-haystacks problem. Who knows how many potential terrorists may be trying to come to the United States, but few appear to be getting through. Out of tens of millions of foreign arrivals every year—including temporary visitors, immigrants, and refugees—only 91 people known to have been born abroad were involved in jihadist terrorist plots since 9/11. And most of these entered the country before entry procedures were tightened following 9/11.

Nationality is a poor predictor of later terrorist activity. Foreign-born jihadists hail from 39 mostly Muslim-majority countries, with about 20 percent coming from Pakistan. The remainder emanated from 38 countries scattered across the globe. There is concern about foreign fighters with European passports gaining entrance to the United States.

No manner of vetting, regardless of how extreme, can identify immigrants who radicalize after they arrive in the U.S. Most foreign jihadists came to this country at a young age. The average age upon arrival was 15 years. The average age at thetime of the attack or arrest was 28. The bureaucratic equivalent of divine foresight would be needed to determine whether a young teenager might, more than a dozen years later, transform into a jihadist terrorist.

Finding those already here who were later recruited to the terrorist ranks or decided to join them is also an enormous challenge. Federal and local authorities have publicly indicated they have followed hundreds of thousands of tips and conducted thousands of investigations since 9/11. Effectively peering into those haystacks is made more difficult because almost 90 percent of the plots involved a single individual. Unless the plotter attracts attention to himself—such as by making threats on the Internet—there is little to go on.

Despite the difficulty, the FBI and local police have been able to uncover and thwart more than 80 percent of the potential jihadist terrorist plots in the U.S., keeping the total death toll under 100 during the 16 years since 9/11. It is a tragic loss of life, but a remarkable intelligence and law enforcement success.

Brian Michael Jenkins is a senior adviser to the president of the nonprofit, nonpartisan RAND Corporation and the author of the 2017 report “The Origins of America's Jihadists.”

This commentary originally appeared on The Hill on December 1, 2017. Commentary gives RAND researchers a platform to convey insights based on their professional expertise and often on their peer-reviewed research and analysis.