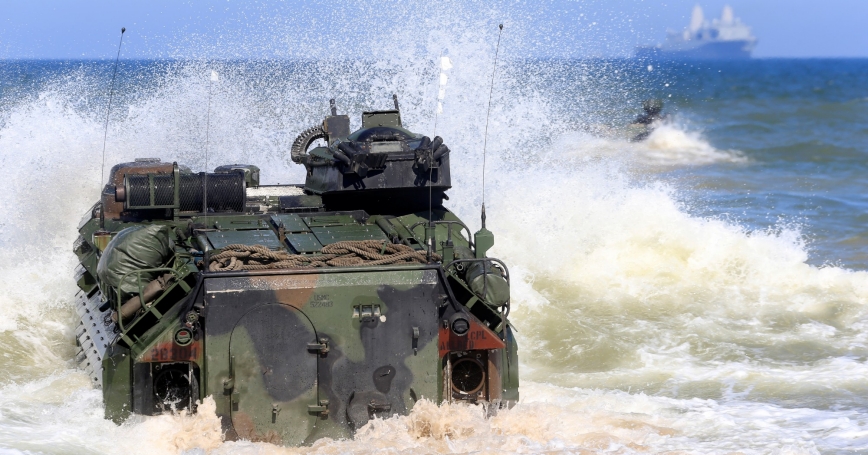 A RAND Corporation workshop focusing on the importance of amphibious and maritime forces working together within NATO was held at the RAND Corporation in Arlington, VA, on January 19. The workshop is the latest in a series of meetings and working group events organized through ALES, the Amphibious Leaders Expeditionary Symposium. The workshop provides a general and flag officer-level venue for dialogue and idea exchange about maritime and amphibious challenges and opportunities in Europe.

Major General Russell Sanborn, Commander, U.S. Marine Corps Forces Europe and Africa, opened the workshop with remarks focused on the importance of amphibious interoperability and cooperation for NATO in Europe.

MajGen Sanborn stressed that NATO Allies and partners have more maritime and amphibious assets in the European theater than the United States does, and commented that a collective approach is necessary to reassure our European Allies and deter resurgent adversaries.

The workshop was attended by senior amphibious and maritime leaders from Europe and the United States, as well as top representatives from RAND and D.C.-based think tanks, who participated in panel discussions addressing a number of topics, including maritime security trends in Europe.

The program also included a discussion of what initiatives might be expected to arise at the 2018 NATO Summit to be held in Brussels, Belgium, in July, relative to maritime and amphibious operations. Workshops such as these are important opportunities for open dialogue about the importance of NATO Allies and partners working together to reassure, deter and conduct effective amphibious and maritime operations when needed.