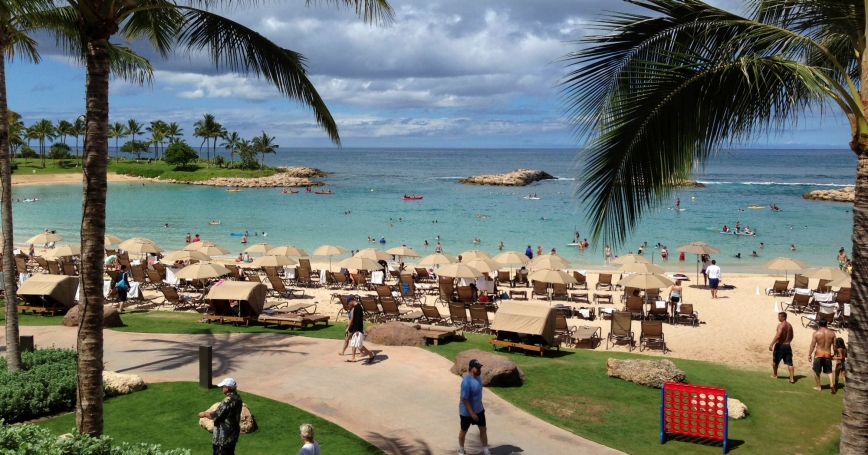 Tourists and locals enjoy Ko'Olina beach on the island of Oahu, Hawaii, July, 29, 2013

by Daniel Gonzales and Sarah Harting

Earlier this month, many in Hawaii experienced 38 minutes of fear and uncertainty, the amount of time that elapsed before the public learned a ballistic missile attack warning message had been issued in error. Officials attributed it to human error—the wrong message option had been selected from a computer application menu.

There's no question the user interface of the application for sending emergency alert messages could be improved so that test and actual message options are not so easy to confuse. But the false alarm from the system in Hawaii brought crucial questions to the fore: When every minute counts, would the window of warning have been enough?

Should North Korea launch a ballistic missile at Hawaii, some experts estimate it would take about 30 minutes to reach its shores, although some speculate it could take as little as 20. Five minutes might elapse before the North American Aerospace Defense Command detects the missile launch and alerts the Hawaii Emergency Management Agency. Emergency managers would then use their computer system to (hopefully correctly) issue a Wireless Emergency Alert to the public. The message is preprogrammed into the agency's system, simply requiring a click on a drop-down menu and selecting the message to transmit it—a task that should not take more than a minute.

When every minute counts, would the window of warning have been enough?

One unknown is how long it would take the message to travel from the Honolulu-based agency to everyone's cellphones in Hawaii. A Wireless Emergency Alert must travel through several links, including through the Federal Emergency Management Agency Integrated Public Alert and Warning System aggregator in the mid-Atlantic region of the United States, where the message is authenticated and forwarded to the relevant wireless carrier networks. Once inside the carrier networks, the message is then forwarded to cell towers in Hawaii for dissemination.

As the alert moves along the message path, it may incur time delays between when it was sent and when the public receives it. The alert system has never been tested to determine total time delays. Only one Wireless Emergency Alert test was conducted before the system became operational—in 2011 in New York City—but the time delays were not carefully measured. There are indications that an alert message may sometimes take 12 minutes to 15 minutes to reach its final destination.

In a worst-case scenario, a missile with a time-of-flight of 20 minutes may land before the public can receive an alert message, leaving no time to respond.

However, it may be possible to reduce the end-to-end transit time of the alert message to only a few minutes or less. Similar emergency alert systems are operational in Japan and Mexico, as well as other countries, for providing early warning to the public via cellphones about imminent earthquakes. The systems send warning messages that reach the public in about a minute or less, including any delays in network transit, according to news accounts of recent earthquakes in Mexico and Japan. The Wireless Emergency Alert system could benefit from studying how the speedier alert time is accomplished.

The U.S. wireless alert system would need to be tested to determine how much time delay currently occurs. The Federal Communications Commission has already determined the system can be upgraded to support earthquake early-warning, which means such messages might be delivered with a time delay of one minute or less. A warning time delay reduced to only 60 seconds? It could be the difference between life and death.

Daniel Gonzales is a senior scientist and Sarah Harting is a senior defense analyst at the nonprofit, nonpartisan RAND Corporation.

This commentary originally appeared on The Hill on January 24, 2018. Commentary gives RAND researchers a platform to convey insights based on their professional expertise and often on their peer-reviewed research and analysis.