Is Macron Set to 'Take Back Control' of UK-France Border After Brexit? 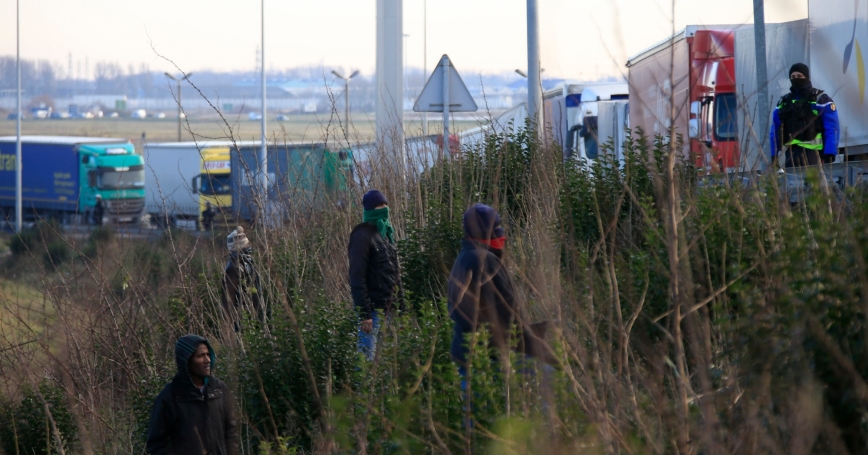 A French gendarme stands guard near a line of trucks as migrants attempt to board trucks heading across the Channel to Britain, near Calais, France, Janaury 21, 2016

by James Black and Sarah Grand-Clement

As French President Emmanuel Macron arrives in London for the 35th UK-France Summit and his first formal bilateral meeting with UK Prime Minister Theresa May, all the talk has been of boosting Anglo-French cooperation, from post-Brexit trade to European defence. However, growing French discomfort with arrangements at the UK-France border could be a potential sticking point as both leaders meet—and a test-case for where, in very literal terms, the two countries stand in relation to each other as both sides seek to define a new strategic relationship in a post-Brexit world.

The UK's decision to leave the European Union has added new urgency to an already fraught debate about border arrangements between the UK and France. These are not governed directly by membership of the EU, but rather through the bilateral Le Touquet Treaty signed in 2003. This agreement effectively relocates the UK border to Calais, as well as other key points of departure from France, such as Channel ports and the Eurostar terminal in Paris.

The arrangement has caused controversy within France, particularly in the Calais region, as migrants attempting to reach or claim asylum in the UK have been prevented from leaving French soil. This has led to the creation of improvised migrant camps. The most famous, the “Calais Jungle,” was shut down by French authorities in October 2016, although this has not stopped migrants from coming back. The poor conditions in these camps continue to pose a significant humanitarian and security challenge for the French government.…

James Black is a senior analyst and Sarah Grand-Clement is an analyst at RAND Europe. James was involved in RAND Europe's report ‘Defence and Security after Brexit.'

This commentary originally appeared on Prospect Magazine on January 17, 2018. Commentary gives RAND researchers a platform to convey insights based on their professional expertise and often on their peer-reviewed research and analysis.