The Chairman the Pentagon Needs 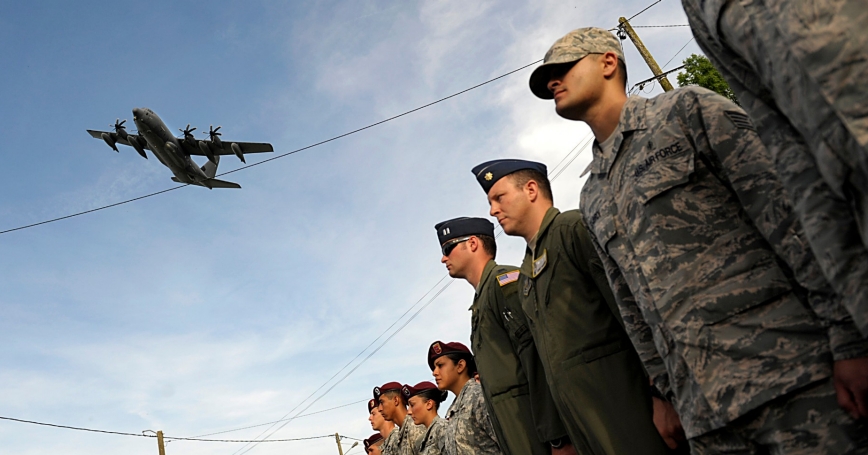 A C-130J Super Hercules aircraft flies over a formation of Airmen during a ceremony to remember veterans of World War II on the 70th anniversary of D-Day in Picauville, France, June 6, 2014

There's a new acronym that has taken hold across the Department of Defense over the last two years or so: TMM. It stands for trans-regional, multi-functional, and multi-domain; and, chairman of the Joint Chiefs of Staff Gen. Joe Dunford, has made it a core element of the Joint Staff's work. According to Dunford, the department's “current planning and organizational construct” is flawed, impeding the secretary of defense's ability to make decisions. To fight and win 21st century wars, the department should find a way to globally integrate below the secretary of defense. But to do so, the chairman's role needs to evolve considerably. As Dunford explained to the Senate Armed Service Committee a few months ago, the chairman needs “limited authority for the worldwide reallocation of a limited number of military assets … on a short-term basis (PDF).” This authority builds on the 2017 National Defense Authorization Act (PDF) that allows the chairman to advise the secretary on the allocation and transfer of forces for transregional, multi-functional and multi-domain operations. So, are these arcane developments of interest to a few pentagon staffers, or are they indicative of something more fundamental happening?

First things first: What does “trans-regional, multi-functional, and multi-domain” mean? According to the Joint Staff (PDF), it includes crises and contingencies that cut across multiple combatant commands; cut across land, sea, air, space, and cyberspace; and involve conventional, special operations, ballistic missile, strike, cyber, and space capabilities. At a glance, it seems sensible to ask the chairman to adjudicate the competing demands among the combatant commands and the services. After all, the global security landscape is increasingly complicated and competitive. Just some of the vexing problems associated with national defense challenges that stretch beyond borders and domains include: gray zone conflict being waged across Europe, the Middle East, and Asia, to cyber sabotage emanating from Russia, China, and North Korea; North Korea's accelerated nuclear program and its burgeoning threat to Northeast Asia and the United States; Russian and Chinese military modernization to include China's aggressive moves to dominate artificial intelligence; violent extremist organizations in the Middle East, Africa, and Asia; Iranian meddling and misbehavior across the Middle East; and continued U.S. efforts to stabilize Afghanistan and Iraq in unstable regions....

This commentary originally appeared on War on the Rocks on January 5, 2018. Commentary gives RAND researchers a platform to convey insights based on their professional expertise and often on their peer-reviewed research and analysis.