Trump's First State of the Union: Insights from RAND 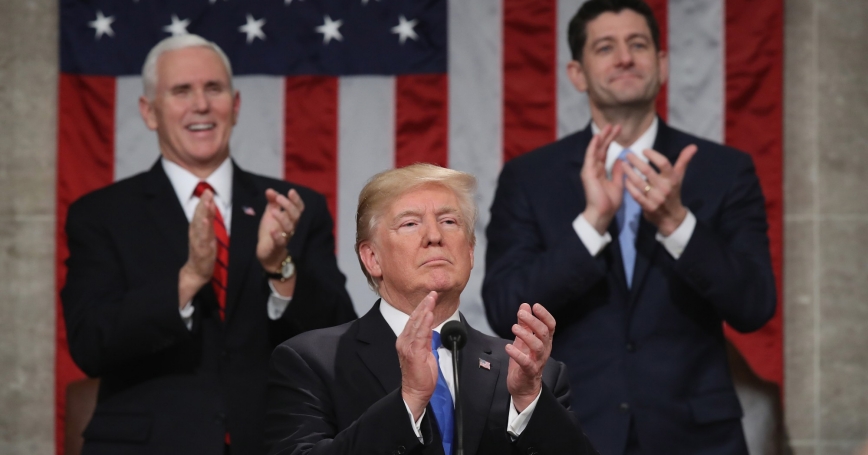 The most immediate impact of President Donald Trump's first State of the Union address will likely be felt in the ongoing debate over immigration reform and border security. But the scope of last night's speech was much wider, touching on a range of policy challenges.

If policymakers are to develop effective solutions, they'll need to draw on high-quality research, analysis, and expertise that are objective and nonpartisan. Below are some excerpts from the president's remarks, followed by context provided by RAND work.

”I am asking both parties to come together to give us the safe, fast, reliable, and modern infrastructure our economy needs and our people deserve.“

There are indeed serious problems with U.S. infrastructure. However, a recent RAND report finds that “not everything is broken” with transportation and water infrastructure funding and finance. A consensus on priorities, accompanied by targeted spending and policy changes, is needed.

“Spreading federal dollars around to fund short-term, 'shovel-ready' projects without a sense of national purpose or priority will not get the nation where it needs to be,” says lead author Debra Knopman.

What can legislators do? A related research brief outlines 10 steps Congress could consider—in conjunction with states, local governments, and the private sector—to pursue a targeted approach.

How to Stabilize Iraq (and Syria) After ISIS

“The coalition to defeat ISIS has liberated almost 100 percent of the territory once held by these killers in Iraq and Syria. But there is much more work to be done. We will continue our fight until ISIS is defeated.”

The disintegration of ISIS's so-called caliphate has imbued recent RAND satellite analysis of the region with new importance. Examining ISIS-held territory in Iraq and Syria from space originally gave researchers a window into how the group governs. Now it shows the economic damage ISIS left behind, and what it will take to rebuild.

Eric Robinson, lead author of the report, captured the urgency of the situation: “The big concern in this region is that if we don't help truly rebuild and reconstitute the local governance in those areas, that there will be a resurgence of an ISIS 2.0 or an ISIS-like group.”

Other RAND experts agree. “This is a delicate phase of Iraq's history,” said senior policy researchers Shelly Culbertson and Linda Robinson. “Moving quickly [to promote stability] could send a critical message to the Iraqis. American help after the military victory [over ISIS] could help to ensure that the U.S. investment in the combat phase pays off.”

A recent report by Culbertson and Robinson outlines key steps the United States, the Iraqi government, and the international community could take to address humanitarian needs, security, governance, and more. If efforts to stabilize Iraq after driving out ISIS are insufficient, the authors warn, another wave of violence could envelop the country soon.

What to Do About a Nuclear North Korea

“No regime has oppressed its own citizens more totally, more brutally, than the cruel dictatorship in North Korea.

“North Korea's reckless pursuit of nuclear missiles could very soon threaten our homeland. We are waging a campaign of maximum pressure to prevent that from ever happening.”

North Korea may consider nuclear weapons as essential to regime survival. According to RAND's Bruce Bennett, the United States should figure out how to persuade the regime it is less likely to survive by posing a nuclear threat than by cooperating with the international community.

Bennett is the author of a recent report on North Korean elites, a group that will supposedly suffer in the event of Korean unification, according to Pyongyang's propaganda. Unless the elites are convinced otherwise, peaceful unification may be impossible. What could South Korea do to help the elites feel more positive about, or at least less resistant to, this possibility? Bennett's report outlines specific recommendations.

Finally, RAND's James Dobbins and Jeffrey Hornung offered another recommendation in a June 2017 commentary: Stand ready to formally end the Korean War. (A cease-fire suspended the conflict 64 years ago, but a peace treaty was never signed.)

“My administration is committed to fighting the [opioid] epidemic and helping get treatment for those in need…. The struggle will be long, and it will be difficult. But as Americans always do, in the end, we will succeed.”

People who misuse opioids have mortality rates that are up to 20 times higher than the general population. A recent RAND study finds that three measures for quality medical care could reduce deaths among patients with an opioid addiction by as much as one-third.

According to another recent study, combining substance abuse treatment with regular medical care can successfully treat people with opioid addiction. This option could expand treatment and lower the cost of caring for those impacted by America's opioid epidemic.

“Around the world, we face rogue regimes, terrorist groups, and rivals like China and Russia that challenge our interests, our economy, and our values.

“In confronting these horrible dangers, we know that weakness is the surest path to conflict, and unmatched power is the surest means to our true and great defense. For this reason, I am asking Congress to end the dangerous defense sequester and fully fund our great military.”

The U.S. military could, under plausible assumptions, lose the next war it is called upon to fight. That's according to a new RAND report that evaluates U.S. capabilities to meet the demands of potential conflicts. involving China, Russia, and other possible adversaries.

Recent congressional testimony by David Ochmanek, lead author of the report, sums up the challenge: “The United States now fields forces that are, at once, larger than needed to fight a single major war, failing to keep pace with the modernizing forces of great-power adversaries, poorly postured to meet key challenges in Europe and East Asia, and insufficiently trained and ready to get the most operational utility from many of DoD's active component units.”

Ochmanek and coauthors have identified high-priority areas for future investment and outlined a new approach to force planning for today's dangerous world.