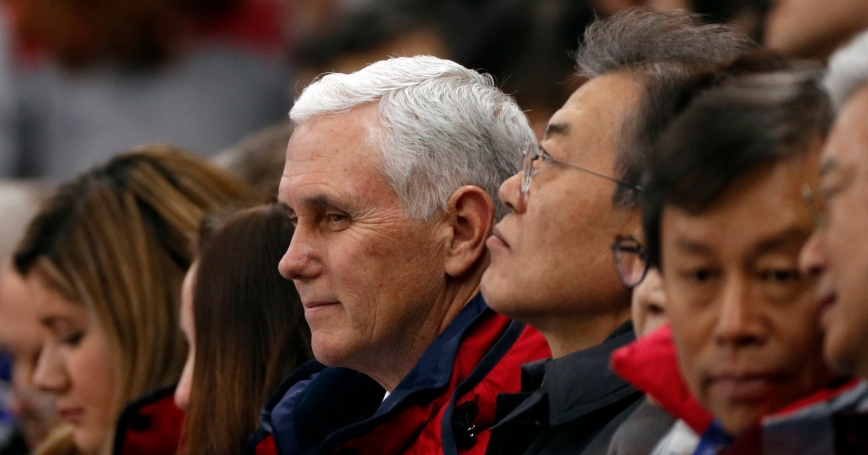 Is North Korean leader Kim Jong Un's Olympic diplomacy simply an effort to divide South Korea from its American ally, as many commentators have suggested? Was Vice President Mike Pence upstaged in Pyeongchang by Kim's sister, the enigmatic and photogenic Kim Yo-jong? Above all, what will this effort at North-South rapprochement ultimately produce?

It is worth recognizing that all the main actors in this drama are playing roles pioneered by earlier generations of Korean and American leaders. Kim Il Sung, grandfather of the current North Korean leader, launched the first effort at inter-Korean reconciliation in 1972, following this up with an approach to the United States. The 1990s saw a succession of war scares, overtures to the South, and direct North Korean engagement with Washington. This continued into the first decade of the current century, culminating in six-party talks that also included Japan, China and Russia.

Today, Kim Jong Un is not so much trying to divide South Korea from the United States as he is seeking to influence Washington through Seoul. For their part, today's South Korean and American leaders are acting out familiar good cop, bad cop parts, perhaps best exemplified by South Korean President Moon Jae-in's hospitality to the visiting North Korean delegation, and by Vice President Pence's passive-aggressive stance, sitting next to but not looking at Kim's sister while refusing to cheer when the all-Korean women's hockey team entered the arena. On the plane back to Washington, Pence acknowledged that, though the Trump administration is willing to talk to the North Korean leadership, it is not willing to ask. That role, as in the past, falls to the South Koreans, in this case President Moon Jae-in.

North Korean diplomacy has never opened any lasting breach between Washington and Seoul. Basically, both allies want the same thing.

As a practical matter, North Korean diplomacy has never opened any lasting breach between Washington and Seoul. Basically, both allies want the same thing, and the South Koreans want it even more than the Americans. Simply put, the South Koreans want, above all, to live at peace with their Northern neighbor, secure from attack and intimidation.

In the immediate aftermath of the Korean War, American and South Korean leaders were divided over the issue of reunification. The United States was willing to accept division of the peninsula as the price for peace. Then-South Korean President Syngman Rhee wanted to continue the war. Constrained to abide by the Armistice signed in 1954 by American, Chinese and North Korean (but not South Korean) generals, Rhee sabotaged a peace conference the following year by insisting on a non-negotiable proposal that even the United States could not defend. Rhee demanded, as South Korea's condition for peace, that the North agree to reunification under the existing South Korean constitution. North Korea also sought unification, but proposed a somewhat less lopsided formula for achieving it.

Over time, this bone of contention between Seoul and Washington has faded. Both North and South Korea continue to espouse the goal of unification, but neither has been in any hurry to achieve it. In 1954, the two states had roughly equivalent populations, and the North was more industrialized. Today, the South is twice as populous and almost 20 times more prosperous than the North. Real unification would be extraordinarily expensive for the South, and transformative for the North in a manner its leadership could never accept.

Real unification would be extraordinarily expensive for the South, and transformative for the North in a manner its leadership could never accept.

Talk of unification nevertheless remains a staple of North-South dialogue. The South would certainly like to ease tensions and increase commerce, travel and communication with the North. The North uses these desires as entry points for dialogue on other things it wants from the South, and from the United States.

Prior efforts at rapprochement have not been entirely fruitless. In the 1990s, North Korea agreed to and began dismantling all its nuclear reactors. The United States promised in return to supply newer, more proliferation-resistant replacements. The American-promised reactors never appeared, while the North Koreans established a clandestine enrichment program which they had earlier agreed with South Korea not to do. The overall effect of this decade of engagement was to slow but not halt North Korea's progress toward nuclear weapons.

The current spate of North-South diplomacy could be short-lived, giving way to resumed tensions and mounting fears of war. It seems possible, however, based on what Pence had to say about the administration's readiness for dialogue, that Moon Jae-in will succeed in brokering direct talks between Pyongyang and Washington. If so, the resulting discussions are likely to focus, in the first instance, on the Chinese proposal for a reciprocal freeze, in which the North halts nuclear and long-range missile tests while the South Koreans and Americans halt large-scale joint military exercises.

Such a deal would not solve any of the underlying differences, but it would, for as long as it held, prevent North Korea from testing an operational ICBM capable of delivering a nuclear warhead to the continental United States. If continued for an extended period, such a freeze on joint military training exercises could begin to compromise the conventional defense of South Korea, but this could be alleviated by holding smaller-scale joint U.S.-South Korean exercises, both there and perhaps also at training facilities in the United States. Such an agreement would not stop South Korea from holding its own training exercises of any scale, which would also bolster readiness, send a strong political signal, and move it towards the point where it could do more to defend itself.

This commentary originally appeared on Reuters on February 21, 2018. Commentary gives RAND researchers a platform to convey insights based on their professional expertise and often on their peer-reviewed research and analysis.