Can the U.S. Afford to Reduce Global Public Health Funding? 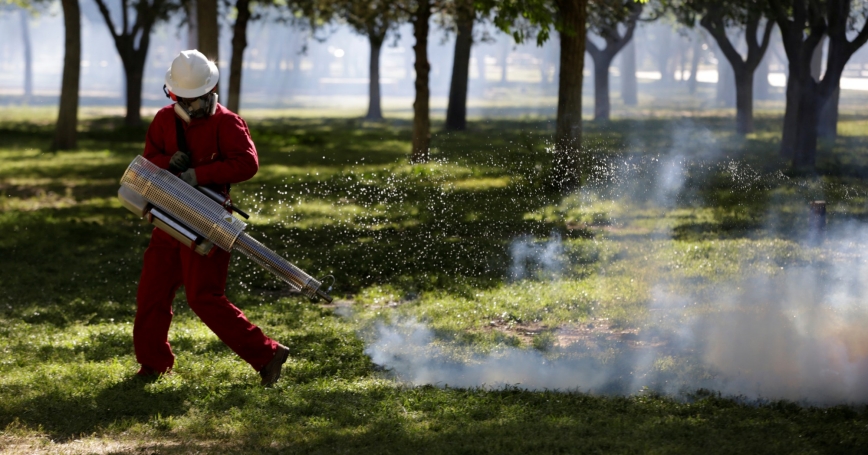 A health ministry worker fumigates a public park during a campaign against dengue, chikungunya, and Zika, Ciudad Juarez, Mexico April 4, 2017

Recent reporting suggests that the Trump administration is preparing to downsize the Centers for Disease Control's (CDC) global epidemic prevention activities in 39 of 49 countries starting in 2019 when funding first authorized by Congress in 2014 expires. Such a move is potentially dangerous and could place the U.S. at significant risk.

When the funding for the CDC's epidemic prevention activities around the world expires, the emphasis would be placed on preventing disease in 10 priority countries. This would mean that work would be scaled back or perhaps even halted in key nations such as China, Pakistan, Haiti, Rwanda and Congo, which have been hot spots for emerging infectious diseases such as SARS, Foot and Mouth Disease, Cholera and Ebola.

The proposed cutbacks would likely result in the elimination of some CDC-funded epidemic prevention centers in the 39 countries which serve as the front line in disease monitoring and prevention and provide education and support for the development of partner disease surveillance and treatment capacity.

The notion of a shared responsibility to prevent global public health emergencies caused by disease epidemics is hardly new. The history goes back to the 1851 International Sanitary Conference in Paris (PDF) that followed the cholera epidemics in Europe between 1830 and 1847.

More recently, the Obama administration led the development of the 2014 multinational Global Health Security Agenda to prevent “the global spread of infectious-disease epidemics.” The failure to renew funding for global epidemic prevention could represent a reversal of key trends regarding cooperation in disease surveillance.

At first glance, the benefits of these initiatives may seem confined to the partner nations where disease monitoring and preparedness and response programs are based. In fact, the programs provide sentinels for a broader global disease monitoring system of which the U.S. is a significant beneficiary.

Over the past decade, many have come to recognize public health as a national security issue worthy of funding levels that promote and support global health preparedness and response systems. Some disease events—either naturally occurring outbreaks such as influenza or intentional use of pathogens in biological warfare or bioterrorism—have serious national security implications.

Having international and partner systems that promote information sharing in real-time, pre-incident preparedness and response capabilities are important components of public health efforts in the U.S.

It is also noteworthy that this downsizing of global epidemic prevention activities seems to contradict the recent National Security Strategy (PDF) released several weeks ago that lists as one of the priorities to “detect and contain biothreats at their source.”

The international efforts during the 2013-2016 Ebola pandemic, the 2015-2016 Zika outbreak and now this year's seasonal influenza (which has been the most virulent strain in 10 years), demonstrate the need to maintain and enhance these key disease surveillance activities.

The ability to understand the progression of disease requires global disease surveillance networks that include competent partners with the necessary capacity. Unfortunately, many of these nations lack the resources—including funding, knowledge and facilities—and therefore must depend on support for development of their programs.

These recent disease outbreaks also demonstrate a lack of preparedness for these events in the U.S. Shortfalls include inadequate understanding of the progression of the diseases, inability to provide adequate guidance to the public, and lack of medical countermeasures and treatment guidance to name a few.

In the U.S., there were only a couple of Ebola patients, but the knowledge derived from sharing information about the over 25,000 others who were infected with the virus in Africa left the U.S. better prepared.

Reconsidering the current course—taking into account the additional risk burden that would be created by scaling back CDC epidemic prevention activities—could lead to new funding for the programs.

Without renewed funding, the long-term outlook could include weakened global disease surveillance and response systems, less capable partner nations and an increased likelihood of global disease outbreaks that would undoubtedly threaten the U.S.

Daniel M. Gerstein is a senior policy researcher at the nonprofit, nonpartisan RAND Corporation and an adjunct professor at American University. He was the undersecretary (acting) and deputy undersecretary in the Science and Technology Directorate of the Department of Homeland Security from 2011-2014.

This commentary originally appeared on The Hill on February 7, 2018. Commentary gives RAND researchers a platform to convey insights based on their professional expertise and often on their peer-reviewed research and analysis.