Presidential Intelligence Briefings: The Process Is Working. But Is Trump Listening? 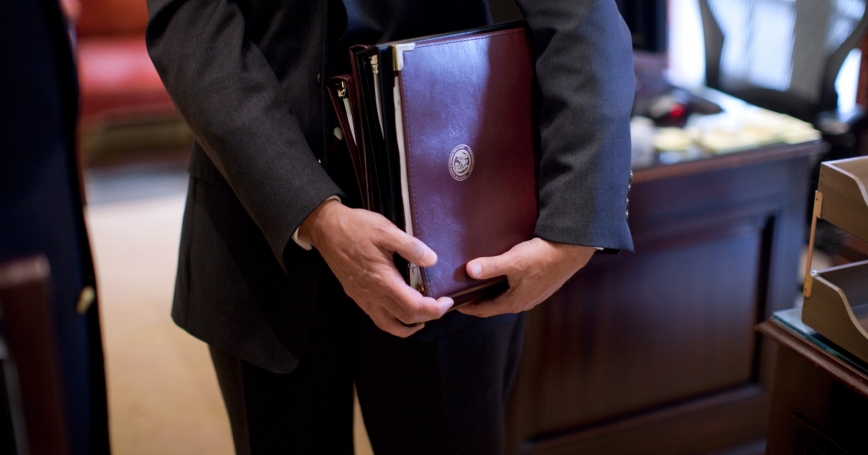 A briefer holds a briefing book prior to the Presidential Daily Briefing in the Outer Oval Office, March 10, 2009

CIA Director Mike Pompeo recently offered rare insights into President Trump's briefing habits. While articles on Trump's reported disinterest in the written intelligence document known as the President's Daily Brief have raised concerns about a lack of engagement, there is nothing inherently wrong with the process Pompeo described (PDF) during an appearance at the American Enterprise Institute last month. Indeed, Pompeo's description suggests that the intelligence community maintains access to the president and provides him with intelligence through the PDB process. It is less clear, however, whether Trump's alleged prioritization of information from sources such as “Fox & Friends” limits his ability to address the complex and interrelated challenges the U.S. and its partners face around the globe.

The good news starts with the revelation that the president is briefed fairly regularly. While a recent analysis of Trump's briefing schedule suggests that Pompeo's description of “near daily” briefings may be a stretch, the president otherwise appears mostly engaged. As a former intelligence analyst, member of the PDB staff and daily intelligence briefer, I am keenly aware of how important it is to have an interested and engaged consumer on the receiving end of such briefings. In my experience, the recipient showing up is more than half the battle because there was nothing worse than playing catch-up on missed sessions within the same briefing. Doing so steals precious time away from other pressing issues. Moreover, presidential briefing articles tend to be best understood in the aggregate; missing even a handful of briefings might deprive the receiver of vital context, or arc, to best comprehend the story.

Pompeo said that Trump is usually briefed in the presence of National Security Adviser H.R. McMaster, Director of National Intelligence Dan Coats, a professional briefer, a CIA officer, Vice President Mike Pence (when he is town) and Pompeo himself. The presidential briefing has not historically been a group activity, but this practice can pay significant dividends. For one thing, multiple participants hailing from different walks of life usually means multiple perspectives and avoidance of groupthink. Pompeo noted that at times Trump engages in a “rambunctious back-and-forth” with his national security team over intelligence in the report. This suggests that briefing participants are challenging each other on the intelligence—whether related to assumptions underpinning assessments, the degree to which intelligence analysis comports with their personal views, relevance to the president's agenda or other factors. That is a healthy phenomenon. At the end of the day, intelligence is meant to produce sound policymaking on priority issues, and that can happen only if it is discussed and evaluated among senior leadership.…

Derek Grossman is a senior defense analyst at the nonprofit, nonpartisan RAND Corporation. He formerly served on the President's Daily Brief staff and as daily intelligence briefer to the Assistant Secretary of Defense for Asian and Pacific Security Affairs at the Pentagon.

This commentary originally appeared on Lawfare on February 15, 2018. Commentary gives RAND researchers a platform to convey insights based on their professional expertise and often on their peer-reviewed research and analysis.