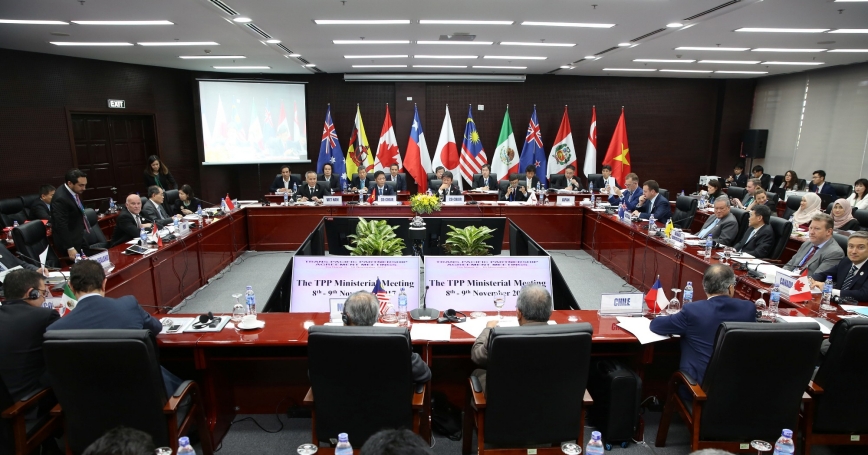 The Wall Street Journal reported earlier this month that the Pentagon is “considering plans to send heavily armed, versatile Marine Corps Expeditionary Units to East Asia…as it repositions forces in response to growing Chinese influence.” Chairman of the Joint Chiefs of Staff General Joseph Dunford subsequently told Australian Prime Minister Malcolm Turnbull during his visit to Washington last week that the U.S. would like to increase its deployment of marines, currently numbering 1250, stationed at the base near Darwin.

The extent to which a greater military presence in the Asia-Pacific would shore up U.S. influence depends on at least two factors: America's ability to rebalance away from the Middle East; and its skill in accepting the inevitability of competition with China without pursuing a path of confrontation.

Although the centrality of the Asia-Pacific to world order has grown apace in the early years of this century, the U.S. has been unable to accord the region commensurate, sustained attention. The George W. Bush administration was largely preoccupied with wars in Afghanistan and Iraq, and the Obama administration found itself buffeted by a sharp deterioration in Syria's security climate.

Even if the Trump administration is able to reduce America's involvement in the Middle East—an unlikely outcome along current trend lines—the U.S. will confront a daunting challenge: to demonstrate that it can make a multifaceted contribution to the Asia-Pacific's evolution without attempting to contain China.

Mindful of the Sinocentric tributary system that prevailed in centuries past, and witness to Beijing's ongoing resurgence, China's neighbours are increasingly vocal in expressing their concerns about its vision of regional order. The more China's economic pull grows, however, the less its neighbours will be able to balance its influence, and, just as importantly, the less willing they will be to forgo the opportunities afforded by China's ascent. They stand to accrue substantial economic benefits by working with the Asian Infrastructure Investment Bank, facilitating the progression of the Belt and Road Initiative (BRI), and otherwise seizing opportunities to strengthen commercial ties with Beijing.

The Trump administration has adopted a more hawkish tone towards China than its predecessors. Its national security strategy concludes (PDF) that “China seeks to displace the U.S. in the Indo-Pacific region … and reorder the region in its favour.” The Pentagon's new defence strategy goes further (PDF):

“[Beijing] will continue to pursue a military modernisation program that seeks Indo-Pacific regional hegemony in the near term and displacement of the U.S. to achieve global preeminence in the future.”

Against the backdrop of such statements, and in the absence of reinforcing diplomatic and economic efforts, China's neighbours may well regard the Pentagon's proposed deployments as part of an anxious superpower's unsustainable effort to contain its putative replacement. As Kurt Campbell and Ely Ratner venture in the new issue of Foreign Affairs, Washington risks “adopting an approach that is confrontational without being competitive.”

While China's neighbours would welcome a U.S. decision to recalibrate that stance, they are not waiting for it to do so; rather, they are increasingly acting independently of what the U.S. does or does not do. Director of National Intelligence Dan Coats testified (PDF) this month before the Senate Select Committee on Intelligence that:

“U.S. allies and partners' uncertainty about the willingness and capability of the U.S. to maintain its international commitments may drive them to consider reorienting their policies, particularly regarding trade, away from Washington.”

The concerns of longstanding U.S. allies in the Asia-Pacific extend from matters of security to trade. Australia, India, and Japan are trying to reinvigorate a maritime cooperation initiative they had with the U.S. (the “Quad”) that ran from mid-2006 to early 2008. India and Japan are intensifying bilateral relations across multiple dimensions, most recently stating their intent to cooperate on an Asia–Africa growth corridor that some observers see as a counter to the BRI. Finally, and perhaps most tellingly, after the U.S. abandoned the Trans-Pacific Partnership (TPP), the remaining 11 negotiating countries pressed onward with the “TPP-11.”

One should not overstate the impact of these efforts. The Quad entails no mutual security obligations. Indo-Japanese outreach, while growing, remains tentative and limited. And the revised TPP is missing its biggest market: the U.S. Overall, there is little reason to believe that intraregional balancing efforts without U.S. involvement will succeed over the long term.

What these initiatives do suggest, however, is growing anxiety over the inconsistency of U.S. engagement with the Asia-Pacific. They also indicate a increasing recognition that, if the U.S. offers no region-wide trade and investment package in response to China's geoeconomic statecraft, it is behoven to accrue the maximum gains possible from Beijing's ascent, while doing as much as it can on its own to prevent China from dominating the Asia-Pacific.

Of course, military power has been, and will remain, essential to America's presence in the region. As Harvard scholar Joseph Nye observes:

“[Military power] provides a degree of security that is to political and economic order as oxygen is to breathing: little noticed until it begins to become scarce.”

A more forceful U.S. posture in the Asia-Pacific would most likely strengthen America's long-term position in the region within the context of a multifaceted reorientation: that effort should include a vigorous initiative to rehabilitate key bilateral alliances, especially with Tokyo and Seoul, and a credible plan to compete with or at least supplement the roster of economic initiatives that China is advancing across the region.

Should China's neighbours conclude that the U.S. can only respond to Beijing's growing economic heft with increasing military capabilities, they will increasingly question its ability to sustain U.S. competitiveness in the Asia-Pacific over the long haul.

This commentary originally appeared on Lowy Institute's Interpreter on February 28, 2018. Commentary gives RAND researchers a platform to convey insights based on their professional expertise and often on their peer-reviewed research and analysis.