The Immigration Debate: Building a Bridge Across the Deportation-Amnesty Divide 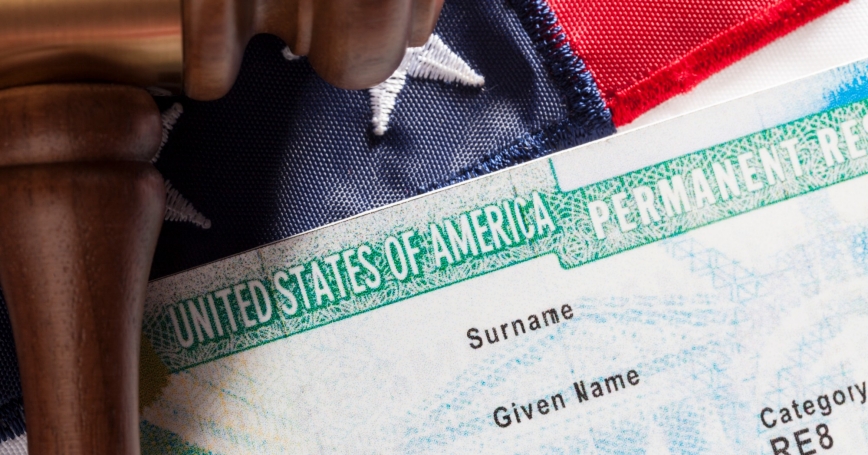 U.S. Permanent Resident ID (green card) with a gavel and an American flag

For many years now, the country has been suffering from an acute case of immigration debate fatigue. At the heart of the debate are the millions of individuals who are in the country unlawfully. Discussions over how to deal with this population are often dominated by arguments that pit “rule of law” proponents—focused on apprehension, detention and deportation—against “humanitarian” supporters seeking some form of pardon or amnesty that will allow these individuals to remain in the country.

Both groups represent what are regarded as core American values: respect for the rule of law and respect for human rights. However, both groups often employ heated rhetoric that favors their own positions, hindering movement forward toward a compromise solution that can be passed into law. But an accessible alternative path—consistent with both core values and current immigration laws—does exist, according to recent analysis my colleagues and I conducted for the nonpartisan RAND Corporation.

A little-known section of the Immigration and Nationality Act known as “Cancellation of Removal” allows individuals who are in the U.S. unlawfully to apply for, and receive, lawful permanent resident status (a “green card”). This section of the law remains obscure to the general public primarily because it limits the power to grant cancellation of removal only to the attorney general of the United States. This has come to mean that only an immigration judge (an employee of the Department of Justice) can adjudicate an application for cancellation. But with only about 330 immigration judges in the system, and a backlog of more than 600,000 cases, the average time before a case is heard stands at nearly two years.

To qualify for this benefit, the law stipulates that an individual must have been physically present in the U.S. for a continuous period of at least 10 years, established “good moral character” during that time, not been convicted of certain crimes (such as aggravated felonies, drug offenses, domestic violence, human trafficking and other offenses listed in the statute), and established that deportation would result in exceptional and extremely unusual hardship to a U.S. citizen or lawful permanent resident spouse, parent or child of the individual applying.

If Congress opted to do so, it is possible that this law might serve as a vehicle for immigration compromise, but for that to happen, it would need to be amended in three ways.

The law currently caps the number of grants of cancellation at 4,000 per year. However, in practical terms, the limit is effectively of no consequence. Once the cap is reached, additional applicants are not denied and deported, but are pushed further out on the backlogged immigration court calendar and allowed to continue to remain in the country until their cases receive a hearing. And in an attempt to deal with the court's backlog, the Department of Homeland Security has made the deportation cases of certain individuals a priority, including the cases of those apprehended at the border, or who represent a public safety or national security risk. This works against those most likely to be eligible for cancellation because their cases are less likely be heard.

The U.S. Citizenship and Immigration Service's employees are likely far better equipped than immigration courts to tackle this problem.

To bring relief to potentially millions of (already) eligible immigrants—and to relieve the pressure on the country's overburdened immigration system—Congress could amend the statute to give the U.S. Citizenship and Immigration Services, an agency within the Department of Homeland Security, equal authority to adjudicate applications for cancellation. From a human resources perspective, the U.S. Citizenship and Immigration Service's approximately 19,000 employees are likely far better equipped than the nation's immigration courts to tackle this problem. Moreover, the service's adjudicators are already authorized to grant “green card” status under a similar statutory provision and application system, so are well-qualified to adjudicate cases. Additionally, to extend the scope of availability of cancellation, Congress could consider expanding or eliminating the cap that limits grants of cancellation to 4,000 per year.

Congress could also consider striking the current exceptional hardship standard required to qualify for cancellation in favor of a lower standard that could be coupled with a penalty provision should Congress deem that necessary. The current standard is typically difficult to meet and is inconsistent with other longstanding immigration laws and historical precedent related to this clause that require only “extreme” hardship, which is still a high burden. By expanding the pool of eligible immigrants to apply for cancellation of removal, the government would address the immigration status of a larger number of individuals who have lived and worked in the United States over 10 years. Concurrently, a penalty provision, if enacted, would then allow the government to punish the unlawful conduct of these same individuals (typically illegal entry or visa overstay). In this way, the goals of both the humanitarian group and rule of law group might be met, at least in part.

In lieu of deportation, Congress could decide what type of penalty would be sufficient, realistic and measured, to address the immigration violations. For instance, punishments might include paying all back taxes owed for the 10-year period, and/or a civil fine; limiting access to public benefits; or instituting a restriction or bar to naturalization. In addition, Congress could also impose conditions for cancellation of removal, such as passing a civics and/or English exam.

Amending the cancellation of removal statute as described could be a workable compromise position for both the rule of law and the humanitarian sides of the immigration debate. It also may offer a path to compromise that focuses on discussion and solutions rather than divisive rhetoric and stalemate.

Douglas Ligor is a senior behavioral/social scientist at the nonprofit, nonpartisan RAND Corporation. Most recently, he was Deputy Chief of the Northeast Law Division for the Office of the Chief Counsel, United States Citizenship and Immigration Services, Department of Homeland Security. He has also served as a trial attorney for Immigration and Customs Enforcement (within DHS), and the Department of Justice, Immigration and Naturalization Service.

This commentary originally appeared on The Hill on February 27, 2018. Commentary gives RAND researchers a platform to convey insights based on their professional expertise and often on their peer-reviewed research and analysis.