What Next for China-Pakistan Relations? 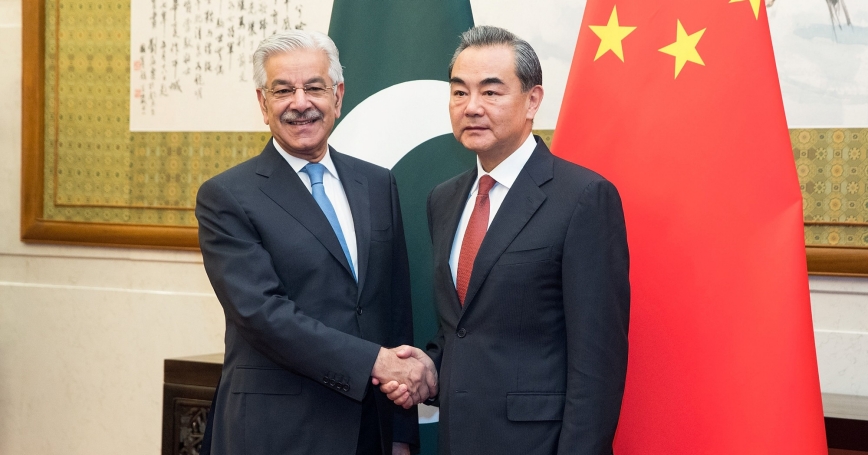 by Derek Grossman and Keren Zhu

The latest bout of strain in US-Pakistan ties has resulted in the Donald Trump administration deciding to suspend US$1.3 billion in security assistance to Islamabad, with additional punitive steps reportedly under consideration. What are the implications for China and its decades-long “all-weather” partnership with Pakistan? We submit that the recent downgrade in US-Pakistan relations will present both opportunities and challenges for Beijing.

Over the long term, further estrangement in US-Pakistan ties presents Beijing with an opportunity to promote a new model of international development to replace the dominant US model. As part of China's geo-economically ambitious “Belt and Road Initiative”, Beijing preaches “wide consultation, joint development, and mutual benefits” in regional cooperation. This has won support from Pakistan, as demonstrated by Beijing's success in the implementation of the China-Pakistan Economic Corridor—the flagship programme of the Belt and Road Initiative.

The progress of the corridor has already begun yielding substantial dividends in long-term planning, power generation, transport enhancement, port and industrial park development, and people-to-people exchanges. On January 29, the two sides took the first major step towards completing the corridor by inaugurating the Gwadar economic free zone, meaning that the infrastructure in that port area can now support some of the demands of regional trade. China's new approach coincides with an advantageous period in which US influence seems to be eroding in the region. Indeed, Afghanistan may in the future become involved in the corridor as well. In December, Beijing hosted the first trilateral summit between China, Pakistan and Afghanistan to promote talks between Pakistan and Afghanistan.

Suspension of US military aid also gives China the opportunity to focus on assisting the Pakistani military in counterterrorism operations, if it chooses. Beijing has traditionally sought to bolster Islamabad's capacity to serve as a hedge against India's rise. China has offered long-time support to Pakistan's missile and nuclear programme, jointly produced the JF-17 fighter, and facilitated the sale of Chinese-built submarines to Pakistan, among many other areas of cooperation.

Beijing, however, also worries that Islamic extremist groups operating in parts of Pakistan and Afghanistan could pose a threat to China's neighbouring Xinjiang province, with potentially destabilising effects. Thus, China may look to capitalise on reduced US security cooperation with the Pakistani military by more freely seeking to shape Pakistan's counterterrorism agenda in ways tailored to Beijing's interests.

On the other hand, Beijing certainly does not want to be left holding the bag on Pakistan, an infamously unstable country that has endured three coups and numerous periods of unrest throughout its tumultuous history.

Beijing has benefited from the US having to bear the brunt of the financial and other burdens of dealing with terrorist threats emanating from the region.

In recent years, Beijing has benefited from the US having to bear the brunt of the financial and other burdens of dealing with terrorist threats emanating from the region. If instability in Pakistan worsens, Beijing probably would not want to have to be the only external power working to stabilise the situation.

Moreover, the Trump administration appears to have prioritised bolstering relations with India over Pakistan. By maintaining close ties to Pakistan, Beijing will continue to position itself at odds with growing US-India relations. With many other strategic priorities at stake, including in the South and East China Seas, vis-à-vis Taiwan, and on the Korean peninsula, Beijing might seek to avoid reinforcing US and Indian incentives to strengthen their relationship on its western flank. Indeed, viewed from this perspective, Pakistan may increasingly seem like a geopolitical liability.

There are a variety of factors Chinese decisionmakers should consider in light of recent developments in US-Pakistan relations. Both China and the US could benefit from exchanging information on topics of mutual interest, namely on counterterrorism. They might also discover common ground on infrastructure development and trade. The Trump administration's prioritisation of India over Pakistan should not lead to a power politics mindset. Instead, both the US and China should try to find ways to continue working together under the shifting paradigm.

Derek Grossman is a senior defence analyst at the non-profit, non-partisan RAND Corporation. He formerly served as the daily intelligence briefer to the assistant secretary of defence for Asian and Pacific Security Affairs at the Pentagon. Keren Zhu is an assistant policy researcher at RAND and doctoral candidate at the Pardee RAND Graduate School. She previously worked as a research fellow at the Chinese Academy of Social Sciences.

This commentary originally appeared on South China Morning Post on February 26, 2018. Commentary gives RAND researchers a platform to convey insights based on their professional expertise and often on their peer-reviewed research and analysis.