Where Will ISIS Seek to Establish Its Next Safe Haven? 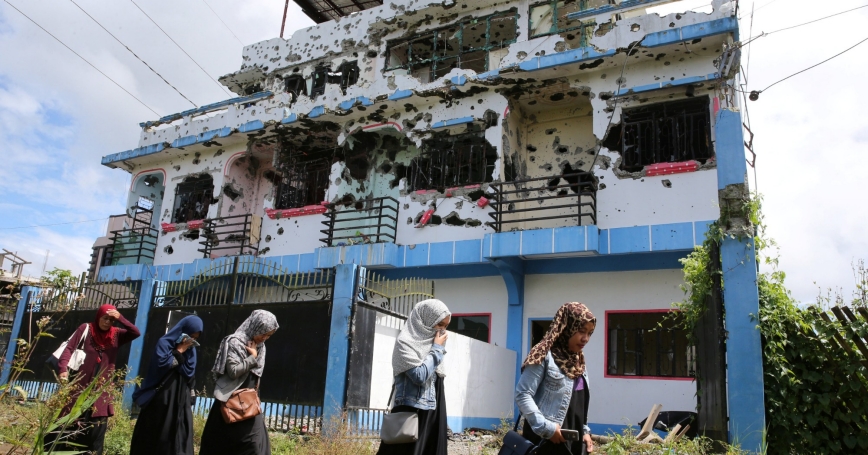 Residents who returned from evacuation centers walk past a bullet-ridden house believed to have been rented by pro-Islamic State militant group leaders before their attack on the region, in Basak Malutlut district in Marawi City, Philippines, October 29, 2017

During his first State of the Union address, US President Donald Trump correctly pointed out that “the coalition to defeat ISIS [Islamic State] has liberated very close to 100 percent of the territory just recently held by these killers in Iraq and in Syria and in other locations as well.” His observation about ISIS being uprooted from nearly all of the territory it once controlled in Iraq and Syria was spot-on, but the reference to other locations as well almost sounded like an afterthought. It shouldn't have.

Theories differ on what will happen next, now that ISIS has lost its “caliphate” in the heart of the Middle East. Some scholars believe the group will seek to re-emerge right back where the group started, in Iraq and Syria, while others suggest that ISIS (or a similar group) will reappear elsewhere. The US and its coalition partners are assessing where that might be.

Historically, terrorist and insurgent groups tend to establish roots in weak states plagued by persistent civil conflict, sectarian tension and government inability to maintain a monopoly on the use of force. Given where ISIS already maintains franchises and affiliates, there are several potential candidates for the next ISIS headquarters, including Libya, the Sinai Peninsula, Afghanistan, Yemen, the Philippines and several regions across Africa.

In Libya, where ISIS boasts approximately 6,500 fighters, the group has carved out space roughly 160 kilometers southeast of its former stronghold in Sirte. ISIS maintains training and operational bases throughout the central and southern parts of the country. US bombers conducted air-strikes against ISIS training camps in Libya in late September, killing dozens of jihadists linked to the group. To date, ISIS's Libyan affiliate has been tied to two major external operations — the deadly Manchester concert bombing last May and the Berlin Christmas market attack in December 2016.

The Sinai Peninsula already has a dedicated ISIS franchise group that has gathered momentum over the past 18 months.

Similar groundwork has been laid in Egypt, where the Sinai Peninsula already has a dedicated ISIS franchise group that has gathered momentum over the past 18 months. ISIS fighters in the Sinai regularly clash with Egyptian security forces and were responsible for the attack on Metrojet Flight 9268, downed nearly two years ago by an ISIS bomb that killed all 224 people on board. The group is also responsible for attacking Coptic Christian churches and firing rockets into Israel.

Furthermore, the ISIS Sinai affiliate declared war on Hamas, sparking fears that ISIS could attempt to move into Gaza, bringing its fighters even closer to the Israeli border. In response to the growing anarchy in the Sinai, Israel has waged a covert air campaign over the past two years, relying on a mix of unmarked drones, jets, and helicopters to target militants (all with the tacit approval of Egypt's top military leadership).

The US Defense Department has acknowledged that ISIS has doubled its size in Yemen over the past year.

The US Defense Department has acknowledged that ISIS has doubled its size in Yemen over the past year, with militants taking advantage of a power vacuum due to that country's ongoing civil war. American air-strikes targeted ISIS training camps in Yemen in mid-October, killing scores of fighters in the failed state on Saudi Arabia's southern border. In recent months, Yemen has moved up on the US list of counter-terrorism priorities, as American policymakers and military officials are increasingly concerned that ISIS fighters fleeing Iraq and Syria will head to the southern parts of the country, previously an insurgent sanctuary dominated by al-Qaida in the Arabian Peninsula in remote tribal areas.

In many ways, the Philippines could prove to be an appealing destination for ISIS fighters to relocate and establish a home base. The geography of the country — the Philippines is an archipelago consisting of more than 7,600 islands — makes counterinsurgency and maritime security difficult for the Filipino government. Moreover, the presence of longstanding insurgent groups that already embrace a radical Islamist agenda could allow ISIS to gain a foothold as it works to champion local grievances. Muslim insurgents in the area often clash with Christian militias, which would provide ISIS with the sectarian angle it often seeks to exploit in countries where its affiliates have been fighting.

And despite recent calls for ISIS fighters to travel to the Democratic Republic of the Congo in Central Africa to organize a new safe haven, the country is not an ideal sanctuary for terrorists, since its civil war does not feature an Islamic dimension and the nation still has a rather nascent transportation, financial and communications infrastructure. The Congo is a strong indication that, for terrorists seeking out weak states in 2017, some states may actually be too weak or geographically isolated.

For many of the ISIS's surviving fighters, a number estimated to be between 6,000 and 11,000, the loss of Iraq and Syria may merely signal a temporary pause in the fight. A significant percentage will almost certainly seek out new battlefields to continue waging jihad. And while the number of foreign fighters returning home to their countries of origin has been far lower than expected (many died on the battlefield), the situation is still one where “hundreds of jihadis are believed to be searching for new battlefields or refuge in Muslim countries,” Robin Wright, a Middle East expert, wrote in The New Yorker last fall.

By coordinating with its allies around the globe, the US could work to help alleviate the conditions that lead states to fail, making them less appealing to groups like ISIS as sanctuaries where the terrorists can rest, rearm and recuperate. This is no easy task, as past efforts at building capacity with suboptimal partners has yielded a less than stellar return on investment, although the alternative of doing nothing seems even less palatable.

Working by, with and through partners to strengthen security cooperation arrangements, the US, in partnership with its closest and most capable allies, can force terrorist groups to spend their time focused on survival, while depriving them the freedom to operate in weak and fragile states and ungoverned spaces.

This commentary originally appeared on The Jerusalem Post on February 18, 2018. Commentary gives RAND researchers a platform to convey insights based on their professional expertise and often on their peer-reviewed research and analysis.