Putin Can Learn from Gorbachev on How to Gain from Future U.S. Talks 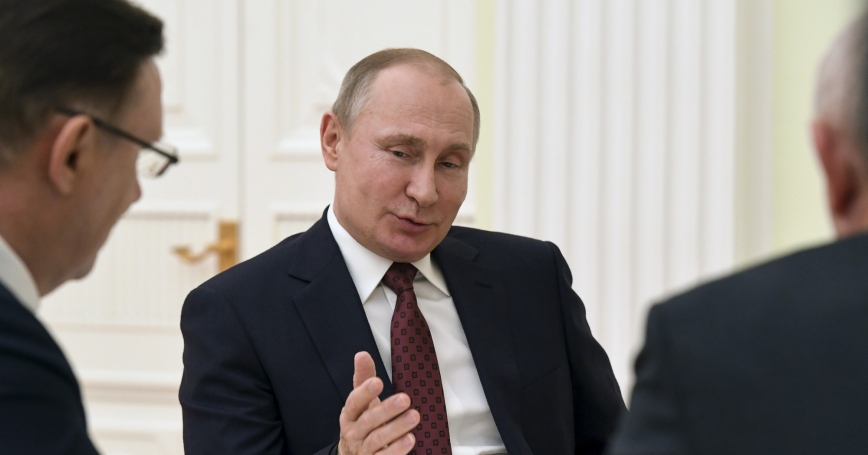 Russian President Vladimir Putin meets with co-chairs of his campaign office at the Kremlin in Moscow, Russia, March 19, 2018

Vladimir Putin has won a flawed election to a fourth term as Russia's president, and Donald Trump has suggested the two will likely meet soon. For the Kremlin leader, however, a summit may draw shortcomings into sharper relief.

While in the 2000s, high oil prices and accumulated reforms lifted the economy and Putin's popularity, the economy has since sagged.

The seizure of Ukraine's Crimea region in 2014 also boosted Putin, but now Russia is bogged down in wars in eastern Ukraine and Syria and facing Western sanctions and a revitalized NATO. Trump has leverage, but continued Kremlin obduracy may constrain summit prospects.

Putin likely would have decisively won a free and fair election in Russia, but he did not compete in one. His most credible challenger, Alexei Navalny, was barred from running, and Putin enjoyed fawning coverage on Kremlin-dominated national television.

Millions of votes may have been fraudulent; in precincts with anomalously high turnout, Putin did exceptionally well. Nonetheless, most Russians back Putin and see him as Russia's legitimate leader.

If the two presidents meet, several key issues will await them.

The biggest source of strain in Russia's relations with the West stems from its aggression in Ukraine, especially the simmering war in the east that has claimed over 10,000 lives. Resulting sanctions ­limit Russia's access to Western finance and energy and defense technology, and penalize entities that work in Crimea.

Last summer by an overwhelming vote, Congress put these sanctions into law. Recently, at congressional urging, the U.S. began supplying advanced anti-tank missiles to Ukraine, helping it raise the costs to Russia of any further aggression.

Unless Putin is ready to pull out his forces and proxies from eastern Ukraine, summit talks on this issue may falter.

In face-to-face encounters Putin has twice denied to Trump that Russian interfered in the 2016 U.S. election, despite a U.S. intelligence assessment (PDF) to the contrary. Last month, Director of National Intelligence Dan Coats said the Kremlin “views the 2018 midterm U.S. elections as a potential target for (its) influence operations.”

If Trump hopes to deter future interference, he will likely need to raise the stakes with Moscow.

In 2015, Moscow sent airpower to help Syrian President Bashar al-Assad shore up his besieged regime. The intervention succeeded. Now Assad appears “ascendant” in the civil war, according to a Gen. Joseph Votel, commander of U.S. Central Command. But much of the country is destroyed.

In January, Vladimir Chizhov, Russia's representative to the EU, warned that Europe would “bear responsibility” if it failed to dispense “dozens of billions” of euros to rebuild Syria. Putin worked with other great powers to secure the 2015 Iran nuclear deal.

Without Russian cooperation again, a political settlement for Syria may be out of reach. Trump could encourage Putin to work with other powers, but should not be optimistic.

The best hope for summit progress ought to lie in extending New START for five years beyond 2021. The treaty limits each side to no more than 1,550 nuclear warheads deployed on long-range delivery systems. U.S. military leaders back an extension, and Putin has proposed it.

A complication is Russia's violation of the Intermediate-Range Nuclear Forces (INF) Treaty. Moscow is deploying a banned ground-launched cruise missile. In the 1970s when the USSR took a similar step, a NATO consensus emerged to counter it by deploying ground-launched Pershing missiles.

This will not happen again. While pursuing a NEW START extension, Trump could underline that the U.S. will undertake nuclear and missile defense options that penalize Moscow's INF violation.

Private business is a bulwark of civil society in Russia, critical to a better future. Western economic ties are a stabilizing force; investments often take place over decades. But ties are limited by heavy state control over the economy, which doubled over a recent 10-year period.

Despite the sanctions policy, encouraging economic ties in other areas should remain a priority.

The long-term Western interest is a prosperous and peaceful Russia, not an isolated or resentful state. The West has no interest in keeping Russia down, as some in Russia allege. Sanctions are appropriate to penalize misbehavior but should continue to hit perpetrators and not slide into collective punishment.

As in the late Soviet period, Kremlin rulers today are pushing an aggressive geopolitical agenda even as the economy lags and society is stressed.

Soviet President Mikhail Gorbachev eased geopolitical burdens by negotiating arms control accords and withdrawing forces from Afghanistan, so that more resources could flow to the economy. U.S.-Russian summitry may not pay big dividends until Russia's current rulers come to a similar realization.

William Courtney is an adjunct senior fellow at the nonprofit, nonpartisan RAND Corporation, and a former U.S. ambassador to Kazakhstan, Georgia and a U.S.-Soviet commission to implement the Threshold Test Ban Treaty.

This commentary originally appeared on The Hill on March 22, 2018. Commentary gives RAND researchers a platform to convey insights based on their professional expertise and often on their peer-reviewed research and analysis.