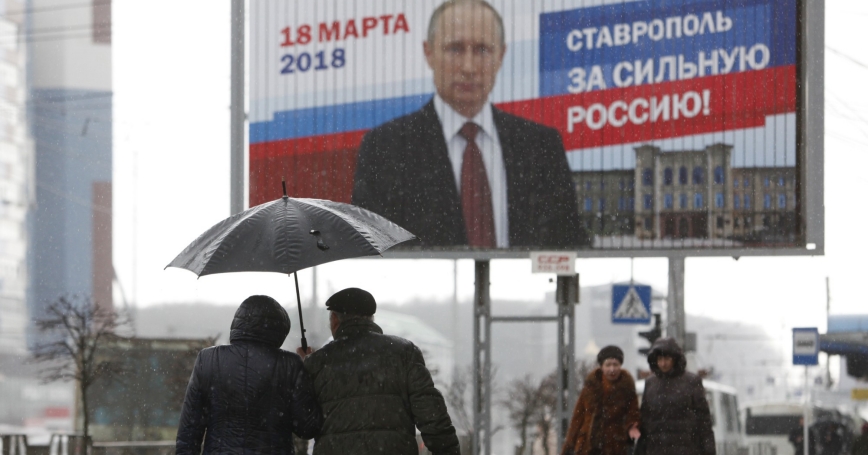 by William Courtney and Miriam Matthews

In a March 1 address to the nation, Russian President Vladimir Putin evoked Soviet-era exaggeration. He proclaimed barely feasible economic and social goals and boasted of nuclear arms that are unlikely to change the strategic balance. Putin likely sought for his remarks to be viewed as a campaign speech before the March 18 presidential election. But bravado may breed popular cynicism, which helped weaken the USSR prior to its collapse in 1991.

For pie-in-the-sky claims, Soviet leaders had few equals. A century ago Vladimir Lenin crowed that under socialism people would “soon become accustomed to no one governing.” In 1930, as collectivization was savaging agriculture and leading to famines, Joseph Stalin claimed the effort was “dizzy with success.” In 1957 Nikita Khrushchev bragged that in “another seven years we will be on the same level as America.”

He forecast that by the middle of the next decade Russia would have one of the “five largest global economies.” A PricewaterhouseCoopers study predicts that Russia's GDP, as measured by purchasing power parity, will barely overtake Germany's by 2030 to become the world's fifth largest. Doing so a half-decade earlier would require a sharp boost in the rate of economic growth.

Former finance minister and noted reformer Alexei Kudrin has said the only way Russia can return to a growth rate of over two percent per year is to undertake major structural economic reform. In his view, if the retirement age were raised, the government reduced its stake in large companies, and tax collection from the shadow economy were improved, in 5-6 years Russia's economy might grow by 3-4 percent per year, despite Western sanctions.

Without promising such reforms, however, Putin still laid out stretch if not myopic goals. He called for doubling spending on healthcare, and on cities and towns, and almost doubling it on road upkeep, boosting housing construction by 50 percent, and cutting poverty by half.

Funding to achieve these goals will be difficult for an economy that the World Bank (PDF) predicts will grow by less than two percent this year and next. Putin was vague about reforms that might raise economic potential in the years beyond. He spoke only of “enhancing government efficiency” and “establishing new tax rules.”

Putin's overpromising may heighten public cynicism about his abilities and those of Russia's government. Research shows that voters see overblown election promises as less credible, even though they can influence voter expectations and behaviors. Political exaggeration widens gaps between popular expectations and performance. Gaps spur negative views of politicians and politics, and may lead to pressures to punish and replace those seen as deceiving voters.

To his credit, Putin was candid about some vexing problems. “We are falling behind…millions of people drink substandard water…some large industrial centers do not see the sun for weeks on end…labor productivity lags noticeably… and corrupt officials and law enforcement pressure business.”

But by highlighting such problems, Putin does run the risk of widening discrepancies between public expectations for solutions and capacity to achieve them. Evidence suggests this increases popular disillusionment and discontent.

Perhaps Putin hoped that highlighting new nuclear arms would help distract popular disgruntlement with recent declines in real household incomes. Yet, some braggadocio was so off the mark as to risk ridicule. He touted a nuclear-powered cruise missile and torpedo, yet neither of these unwieldy weapons would be clearly superior to Russia's existing, fast-flying ballistic missiles. Putin's bragging recalls Nikita Khrushchev's premature claim after the 1957 Sputnik satellite launch that Soviet factories “were turning out missiles like sausages.”

Russian leaders' boasting has some similarities with advertising puffery, which consumers see as less than believable but which may still have some persuasive effect. Unlike puffery, however, leaders in Moscow appear to expect their statements to be treated seriously.

Putin's evident need to exaggerate suggests unease about the election. He hopes to win by 70 percent or more, but is likely concerned about opposition, especially from educated and urbanized voters. If Putin achieves his goal, it might be in part because his only credible challenger, Alexei Navalny, is banned from running.

If a Putin victory does not lead to bold reforms and more prudent choices between guns and butter, Russia's economy and living standards may not live up to popular expectations. If so, continued exaggeration could sap public confidence in the legitimacy of Russia's ruling system and leaders.

William Courtney is an adjunct senior fellow at the nonprofit, nonpartisan RAND Corporation, and a former U.S. ambassador to Kazakhstan, Georgia, and a U.S. Soviet commission to implement the Threshold Test Ban Treaty. Miriam Matthews is a behavioral and social scientist at RAND.

This commentary originally appeared on Newsweek on March 15, 2018. Commentary gives RAND researchers a platform to convey insights based on their professional expertise and often on their peer-reviewed research and analysis.