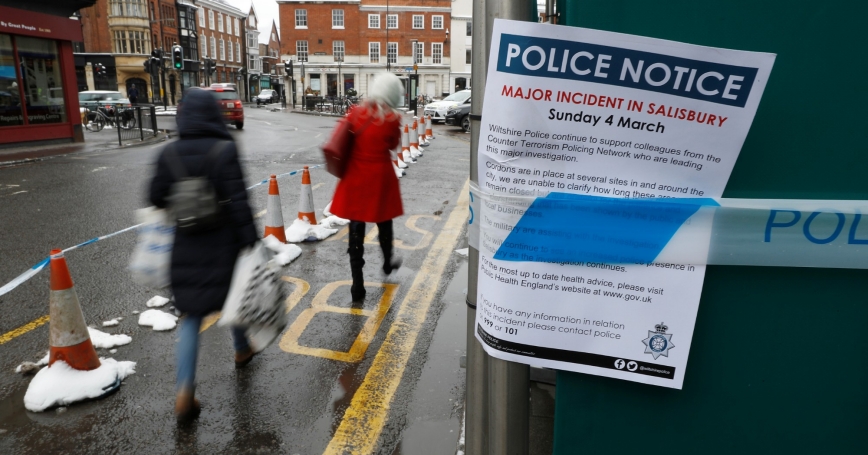 A police notice on screening at a restaurant visited by Sergei Skripal and his daughter Yulia before they were found poisoned in Salisbury, Britain, March 19, 2018

The Skripal poisoning and shrill Kremlin denials of asphyxiating gas attacks by the regime of Syrian President Bashar al-Assad raise doubts about Moscow's commitment to the purposes of the Chemical Weapons Convention (CWC). Russia is also violating the Intermediate-range Nuclear Forces (INF) Treaty. Never has the future of negotiated arms control involving Russia been at greater risk.

In two prominent assassination attempts in the UK, Moscow has used exotic weapons known to be associated with Russian programs, perhaps to warn their own people about disloyalty.

In 2006, Russian defector and former KGB officer Alexander Litvinenko died from poisoning by Polonium-210, a rare and highly radioactive isotope. The next year Andrei Lugovoy, who met with Litvinenko before his death and is wanted by British police on suspicion of assassinating him, was elected to the Russian Duma, implying high-level support in Moscow.

Last month Sergei Skripal, a former Russian military intelligence officer and UK double-agent, and his daughter were poisoned. The British have identified the weapon as Novichok, a series of nerve agents developed by the USSR and Russia. Novichok is up to 10 times more potent than VX, used last year to kill North Korean leader Kim Jong-un's half-brother.

Another concern is whether Russia is complying with the 1975 Biological Weapons Convention (BWC), which has 180 states-parties. After adhering to it, the USSR operated an offensive biological weapons program for over 15 years. According to the U.S. Department of State, it “remains unclear (PDF) whether Russia has fulfilled” all its BWC obligations.

Experience shows that wider developments are sometimes necessary catalysts to learning the truth about or reduce risks from exotic Russian weapons.

In 1979 a release of anthrax spores from a weapons facility in Sverdlovsk (now Yekaterinburg) killed at least 66 people. When word leaked, Soviet authorities blamed consumption of tainted meat. Only after the collapse of the USSR did the truth emerge; in 1992, Russian President Boris Yeltsin admitted the Soviet BWC violation.

The USSR operated the world's largest anthrax factory at Stepnogorsk, in Kazakhstan, and an open-air biological test range on an island (later peninsula) in the Aral Sea. Through the Nunn-Lugar Cooperative Threat Reduction program, the U.S. helped eliminate these facilities. Only after the Soviet collapse was this possible.

Russia is inconsistent in dealing with chemical weapons use in Syria. In 2013 after over 1,400 Syrians died a sarin attack, Moscow forced the Assad regime to cooperate with the U.S. in the removal and elimination of Syria's declared chemical weapons. But despite multiple asphyxiating gas attacks since then, most recently on April 8, Russia denies Assad's culpability and has blocked UN Security Council action. Only under a U.S. threat to strike Syria in 2013 after its sarin use did Moscow pressure Assad to give up some of his chemical weapons.

For several years the U.S. has accused Russia of violating the INF Treaty (PDF), which bans the possession, production, or flight-testing of ground-launched cruise missiles with a range capability of 500 kilometers to 5,500 kilometers. Despite the significance of this challenge to the treaty, the U.S and its NATO Allies have been low-key in publicly discussing it.

Raising the profile of Russian cheating and measures to counter it may be essential for Western governments to sustain political and public support for arms control as a tool to reduce threats.

Washington could take this step to marshal more support for extending the New START Treaty (PDF), which constrains long-range nuclear forces. It expires in 2021 but can be extended for another five years. Any perceptions that arms control violations are being downplayed or not effectively countered may feed suspicions in some quarters that Washington cannot be trusted to enforce compliance with the Treaty.

In his first term, President Reagan faced a similar challenge. Some in Congress suspected that the executive branch had long ignored Soviet cheating on arms pacts. In 1984 Reagan cleared the air by sending Congress a first-ever comprehensive report on Soviet noncompliance.

His forthrightness helped ease the way a few years later for the Senate to assent to the INF Treaty, which Reagan and Soviet President Mikhail Gorbachev signed at the White House in 1987.

As a first step, the West could begin giving higher-profile attention to Russian noncompliance and take more initiative in using existing treaty mechanisms to resolve them. This could help Western leaders assess threats and build political and public support for diplomatic and military measures to reduce and offset dangerous risks.

William Courtney is an adjunct senior fellow at the nonprofit, nonpartisan RAND Corporation, and a former U.S. ambassador to Kazakhstan, Georgia and the U.S.-Soviet commission to implement the Threshold Test Ban Treaty.

This commentary originally appeared on RealClearDefense on April 12, 2018. Commentary gives RAND researchers a platform to convey insights based on their professional expertise and often on their peer-reviewed research and analysis.