The Continuing Plague of Vehicle Attacks: What Can Be Done? 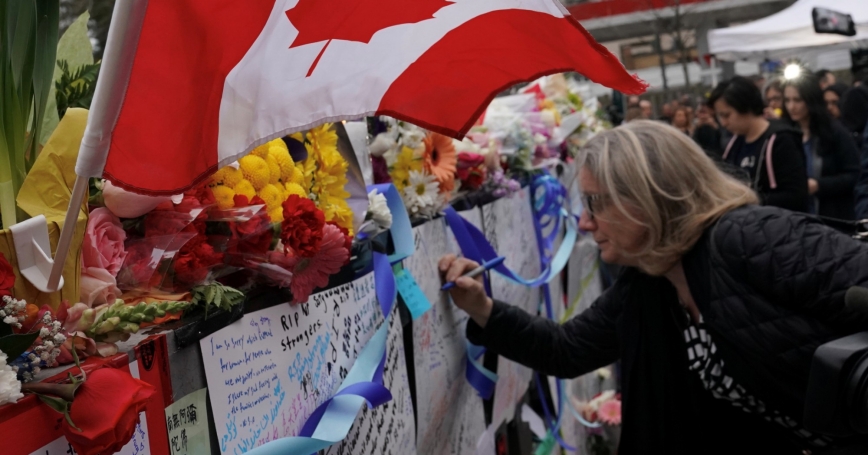 A mourner writes a message on a makeshift memorial a day after a van struck multiple people along a major intersection in north Toronto, Ontario, Canada, April 24, 2018

The news coming out of Toronto this week is hauntingly familiar. On Monday afternoon, a rental van was deliberately driven into a crowd of people, killing 10 and injuring 14. Police arrested and charged 25-year-old Alek Minassian in connection with the attack.

As of now, it seems like this horrific incident was the work of a mentally disturbed individual, since early signs do not point to connections to any known terrorist group, although as journalist Graeme Wood has pointed out, the Toronto attack demonstrates how tactics popularized by the Islamic State can easily spread to other violent actors. The tactics are not specific to a particular ideology.

The ideology that could have motivated the alleged attacker is being openly debated in the press, with some connecting Mr. Minassian to the “incel” movement, a misogynist ideology followed by men who claim to be involuntarily celibate after being rejected by women.

While the debate over the “why” will continue over the coming days and weeks, the real debate should be over the “how,” and more specifically, how to prevent similar attacks from occurring in the future. There are lessons learned and best practices that can and should be taken into account, based on the rash of ramming attacks and vehicular terrorism incidents that have taken place over the past several years.

So-called ramming attacks have occurred in New York City, Barcelona, London, Stockholm, Nice, Paris, Quebec, Jerusalem and Columbus, Ohio. As my colleague and terrorism expert Brian Michael Jenkins has noted, there were 10 vehicle attacks between 1996 and 2013, but 40 such attacks in 2017 alone. This tactic has clearly been copied by attackers and has developed into a trend.

These attacks are opportunistic, low cost and easy to plan and execute, and often result in a significant number of casualties. They are also notoriously difficult to defend against. But just because these attacks are hard to prevent doesn't mean that law enforcement and local security forces can't make progress. As Louis Klarevas and I wrote following a vehicle attack in London, there are four crucial elements to consider when thinking about mitigating the effects of ramming attacks.

We called this approach the DCAM model, for the core elements: density, confinement, access and mass.

Density considers how tightly packed potential victims might be in particular spaces, including venues such as open-air markets, parades, concerts and protest marches, for example. The more people gathered in close proximity to one other, the more attractive the gathering becomes as a potential target for terrorists.

Large crowds are indeed more tempting targets, but especially when the individuals in these crowds might not be able to escape.

Thinking about the “C” in the DCAM model, confinement, helps discern how enclosed potential victims might be. Large crowds are indeed more tempting targets, but especially when the individuals in these crowds might not be able to escape and are thus trapped to experience and witness the carnage surrounding them.

Access is about how approachable the target population is. For example, while crowds inside a stadium are dense and confined, they are also, for the most part, protected from being rammed by a vehicle. For ramming attacks to be effective, terrorists need unfettered access, ideally a direct path, to the group of people they seek to run over.

Lastly, “mass” concerns how large the vehicle being used is. As witnessed in Nice and Berlin, the larger and heavier the truck is, the higher the death toll is likely to be. Vans are deadlier than cars, but trucks are deadlier than vans.

In the past, more conventional steps have proven effective, including “beat cop”-style patrols by local law enforcement and a robust public safety presence in open spaces. There is evidence that these can deter possible attackers from targeting specific venues, such as the Super Bowl. For regularly planned and frequently occurring events held in specific locations, such as marathons or New Year’s Eve celebrations, countersurveillance is critical. Finally, meticulous record-keeping and biometric data that is shared among authorities (especially photos) of suspicious activities can prove instrumental to identifying and locating persons of interest to law enforcement.

But these should be viewed as necessary, not sufficient, responses to vehicle attacks, which also require the physical bolstering of potential targets to include concrete or steel-jersey barriers and stanchions in areas where there is a high volume of pedestrian traffic.

For governments, it is neither possible nor feasible to completely protect all citizens at all times and make everyone immune from terrorism or random acts of violence, especially when attacks can be carried out by individuals relying on means as commonplace as vehicles. But pro-active efforts can at least help to reduce the threat.

Colin P. Clarke is a political scientist at the non-profit, non-partisan RAND Corporation and an associate fellow at the International Center for Counter Terrorism.

This commentary originally appeared on The Globe and Mail on April 25, 2018. Commentary gives RAND researchers a platform to convey insights based on their professional expertise and often on their peer-reviewed research and analysis.