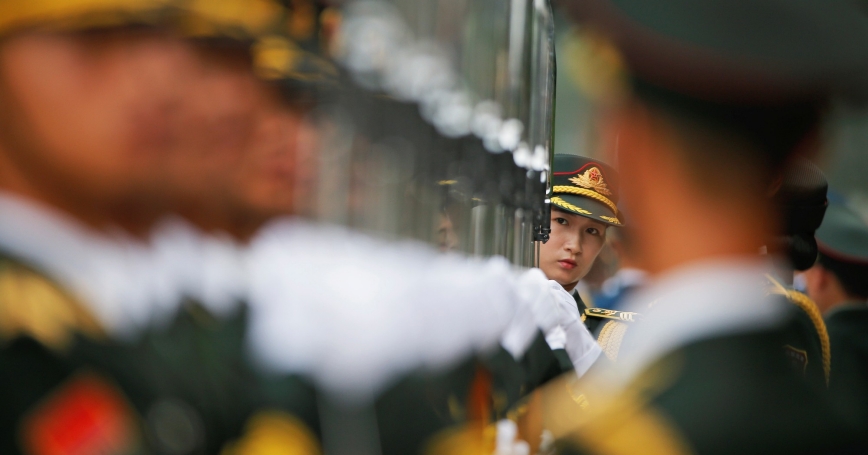 Honour guards at the Great Hall of the People in Beijing, China, July 4, 2016

Deepening integration into the global economy has underpinned China's phenomenal economic ascent. However, growing involvement in international trade and investment has opened significant vulnerabilities. According to Chinese authorities, more than twenty thousand of the country's enterprises are located overseas and more than one hundred million of its citizens travel abroad annually. Dangers in distant lands menace the markets, resources and investments upon which China's economy now depends. In the words of the country's 2015 Military Strategy white paper, China has become “more vulnerable to international and regional turmoil, terrorism, piracy, and serious natural disasters and epidemics.”

As Beijing grapples with the realities of an economy increasingly susceptible to disruption from distant influences, experts debate how the People's Liberation Army (PLA) might protect overseas interests. Some commentators have speculated that China may seek an expeditionary military similar to that of the United States. Others have dismissed such a possibility, citing the country's slowing economy and the complex demands of its security situation.

This debate often presumes that a definitive assessment hinges on a comparison of the PLA against the U.S. military as the archetype of an expeditionary military. But there are compelling reasons to question this assumption. First, the U.S. military developed its expeditionary capability on the foundations of a post—World War II global network of alliances that China conspicuously lacks. The alliances both enabled and drove demand for a powerful U.S. military presence abroad. The United States fought major wars in Korea and Vietnam, for example, in part to defend key allies and uphold the credibility of its security commitments. Because China has no such network, it faces little demand for such a robust capability.

Contrasting threat pictures pose a second important difference. The United States emerged from World War II a global military super power that faced a powerful rival, the Soviet Union, which led its own global network of allies. Partly to counter its geopolitical adversary, the United States maintained a large forward-deployed military capable of fighting major combat operations around the world. For China, threats to its overseas interests stem primarily from nontraditional sources such as terrorism, civil conflict and maritime piracy. To be clear, China does face a growing rivalry with the United States, and the possibility, albeit remote, of a major war cannot be discounted. But in the unlikely event of conflict, such a clash would be fought principally along China's periphery, where flashpoints continue to fester and the PLA poses the largest threat to U.S. forces. Beyond Asia, China has little conventional capacity to contest U.S. power, and little incentive to develop such a capability, given the overwhelming combined power of the United States and its allies.

Third, important political and economic differences inform the evolution of the respective militaries of the two countries. The United States built a robust expeditionary military during a period in which it enjoyed exceptional security along its periphery. Moreover, the postwar period saw the U.S. economy at its most prosperous, enabling generous funding of a globally distributed force. By contrast, China maintains substantial military forces near its borders to keep a watchful eye on many of its neighbors, with whom China has uneasy relations. And as the country's economy slows, the population ages, and demand for social services increase, the desire to field a more capable military abroad will likely compete with other pressing spending priorities. These realities provide an incentive for China to commit a smaller portion of its military forces abroad than the United States could afford and to minimize the expense of overseas military commitments.…

This commentary originally appeared on The National Interest on April 7, 2018. Commentary gives RAND researchers a platform to convey insights based on their professional expertise and often on their peer-reviewed research and analysis.