Advertising and Teens in the Era of the 'Blackout Brownie' 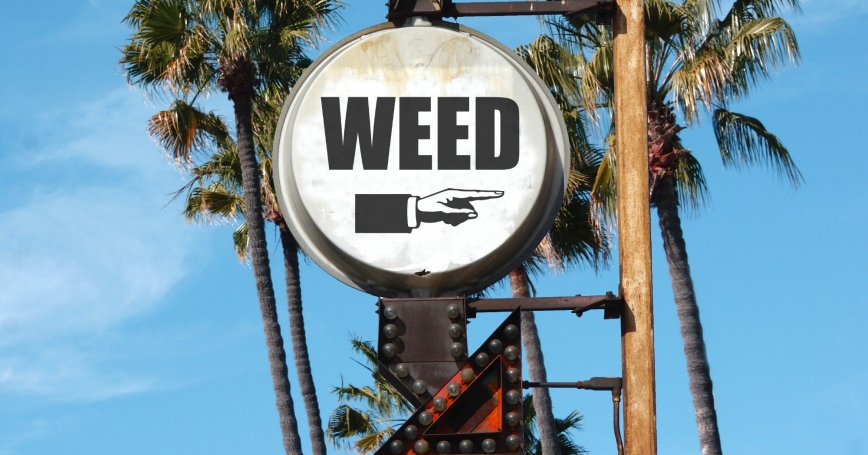 On a major thoroughfare in Los Angeles congested not with cars but with billboards, advertising abounds for the latest legal controlled substance in town. No longer an outlaw, marijuana almost seems to be celebrating its new recreational status with jumbo-size ads touting “Blackout Brownies,” cannabis-infused pomegranate juice called “California Dreamin,” and a delivery service announcing “hello marijuana” and “goodbye stress.”

For example, marketing restrictions on tobacco products ban outdoor advertising within 1,000 feet of schools and playgrounds, and prohibit brand sponsorships of sports (PDF) and entertainment events likely to have younger people in the audience.

The marijuana advertising teens are exposed to could have a profound effect on whether they use this drug.

The marijuana advertising teens are exposed to could have a profound effect on whether they use this drug, according to research my colleagues and I conducted for the nonpartisan RAND Corporation over a seven-year period beginning in 2010.

We recruited 6,500 racially and ethnically diverse adolescents from 16 middle schools in Southern California who went on to attend more than 200 high schools in the region. Teens were surveyed once a year about their exposure to medical marijuana advertising, their marijuana use and their beliefs about the drug.

In 2010, 25 percent of teens reported seeing at least one medical marijuana ad during the previous three months. By 2017, the exposure rate had nearly tripled to 70 percent.

Teens who reported seeing more medical marijuana advertising were more likely to report having used marijuana in the previous 30 days—and more likely to say they expected to use it within the next six months. They were also likely to express more positive beliefs about the drug, such as agreeing that using marijuana can help people relax, let them have more fun, or temporarily escape their problems.

These findings suggest that exposure to medical marijuana advertising may not only play a significant role in shaping teen attitudes about the drug, but it may also contribute to increased marijuana use and related negative consequences throughout adolescence.

Every ad is one more chance to influence teen behavior.

Our research was inspired by a measure on the California ballot in 2010 to legalize recreational marijuana that ended up not passing. Our findings take on added importance since recreational marijuana become legal in the state as of 2018. The advertising landscape is bound to feature more ads focused on various ways to consume or purchase marijuana. Every ad is one more chance to influence teen behavior.

The California legislature is considering a bill that would further restrict marijuana advertising in the state. It draws firm lines that parallel tobacco-advertising guidelines and includes preventing advertising within 1,000 feet of daycare and youth centers, schools and playgrounds. And it includes one more directive open to interpretation: Forbidding advertising of cannabis or cannabis-related products “in a manner intended to encourage persons under 21” to use the drug.

Such restrictions would likely help limit teen exposure to marijuana advertising. At the same time, parents, teachers, and health care providers need to be prepared to help teens navigate this new information superhighway by being ready to share up-to-date information on both medical and recreational marijuana. For example, evidence suggests medical marijuana has some health benefits, including managing chronic pain and lessening chemotherapy-induced nausea and vomiting. However, most studies on medical marijuana have focused on adults. Little is known about the medicinal benefits of marijuana for adolescents.

Recreational marijuana use is another story. In fact, research shows that early initiation of marijuana and increased marijuana use during adolescence have been linked to problems that include cognitive deficits and depression.

Sharing honest information about the effects of marijuana is particularly important because research has shown that many teens think marijuana use is less dangerous than alcohol use. Only about 30 percent of high school seniors surveyed across the United States said they believe that regularly smoking marijuana is linked with risk (PDF), according to a national study. A separate study showed that younger drivers were most likely to think it was safe to drive (PDF) after using marijuana.

Teens need to be reminded that ads don't ever tell the entire story about anything. By design, they are marketing snippets presenting best-case, often fantasy scenarios engineered to influence decisionmaking. With American society once again on the edge of a novel advertising frontier, both ad guidelines and parental guidance are needed.

This commentary originally appeared on USA Today on May 30, 2018. Commentary gives RAND researchers a platform to convey insights based on their professional expertise and often on their peer-reviewed research and analysis.