Assessing Transatlantic Fallout After the U.S. Withdrawal from the Iran Nuclear Deal 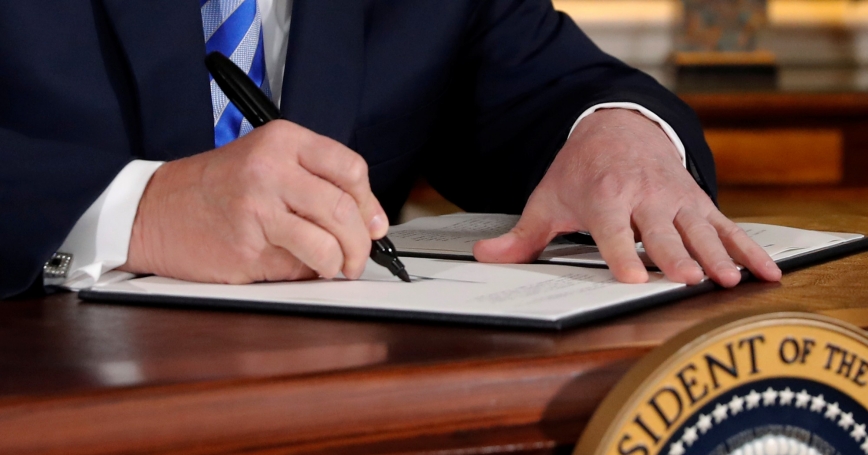 U.S. President Donald Trump signs a proclamation declaring his intention to withdraw from the JCPOA Iran nuclear agreement in Washington, D.C., May 8, 2018

The U.S. withdrawal from the Iran nuclear deal has occasioned another round of reflection on the state and future of the transatlantic alliance. Though subject to significant skepticism and some reasonable concerns in Congress, the deal represented a high point in deliberative diplomacy and patient coordination with its European parties, and placed significant constraints on the Iranian nuclear program.

President Trump's withdrawal from the deal followed several months of frantic negotiations between the U.S. and European partners in hopes of finding an acceptable compromise to keep the U.S. in the deal. The DC visit of French president Emmanuel Macron at the end of April raised hopes that a last-minute agreement could be reached along the lines that some had proposed (PDF), but this optimism was dampened after a presentation by Israeli prime minister Benjamin Netanyahu showcasing evidence of past Iranian nuclear weapons research.

The U.S. withdrawal comes as the latest in a series of flashpoints in U.S.-European relations, following the U.S. departure from the Paris climate agreement, President Trump's frosty meetings with a number of continental leaders, repeated public criticisms over European defense spending levels, and Trump's apparent disdain for the NATO alliance. While the other parties reiterated their intention to preserve the deal if possible, the U.S. is now seemingly poised to re-institute secondary sanctions, and has publicly called on European countries to “wind down” their business in Iran.

The response to the president's announcement has been swift and intense. Commentators have declared the transatlantic relationship dead and reiterated calls for European “strategic autonomy” and a “more independent” role in the world. European Council president Donald Tusk stated that the action had removed any “illusions” and clarified the need for Europe to be “prepared to act alone.” French minister of state Jean-Baptiste Lemoyne went further, stating that “the extra-territorial dimension of U.S. sanctions is unacceptable. We must develop our economic sovereignty now.”

Others, more sanguine about the announcement, have called for the U.S. to be prepared for “escalation targeting Europe's strategic economic sectors” in the event of EU tariffs in response to the re-imposition of U.S. sanctions, to use Eastern European countries to splinter EU solidarity around trying to preserve the deal, and to “remind” key European partners “of America's role as political and security umbrella.”

The U.S. withdrawal was unnecessary and strategically harmful, and undermines both transatlantic trust and the ability of the U.S. to negotiate future multilateral agreements. But its full damage to the transatlantic alliance is not yet clear, and will depend on the extent to which the U.S. escalates the dispute and pursues European firms maintaining business links with Iran.

One crucial issue may be Iranian access to the SWIFT network used for international transactions, which was suspended between 2012 and 2015 and is now again a likely target of U.S. action. Another could be whether the U.S. and its allies can avoid spillover into wider trade negotiations, and how the U.S. will deal with European efforts to protect businesses from U.S. penalties. It could also depend on the extent to which the U.S. uses the issue to drive a wedge between already fractured EU states, and becomes increasingly explicit in its coupling of U.S. security provisions with allied acquiescence on unrelated economic and diplomatic issues.

The outcome of such a standoff is impossible to predict, but the fact a trade war is being seriously discussed at all represents a profound failure for U.S. diplomacy and alliance management. In this regard, President Macron's recent comments reflect a healthy sense of perspective that has been absent from some on both sides of the Atlantic, and is hopefully suggestive of a restraint that would help both sides resolve the dispute.

The U.S. withdrawal, and particularly the way it was done, also reflects a focus on Iran at the expense of other strategic priorities. The most serious danger could be that, in the context of the administration's wider approach to a range of foreign policy issues, these actions could fuel and accelerate a growing blowback against U.S. global leadership not just from its rivals, but increasingly from its friends as well. The response from most European leaders following President Trump's announcement suggests that their frustration following successive disputes is compounding rather than dissipating, and may spread across other areas of cooperation. These issues are particularly concerning in a time when the U.S.-led international order is already under growing strain.

Supporters of aggressive U.S. action against Iran's European business partners point to the powerful levers at Washington's disposal to pressure noncompliant parties. But they also underestimate the painstaking work that went into building the coalitions that made sanctions effective, and the extent to which their long-term success will rely on the active cooperation of international partners. These instruments are indeed compelling, but the U.S. could find that the more stridently and unilaterally it employs these means in the absence of consensus among its friends, the more it will hasten the search for alternatives beyond its reach. While the U.S. financial system and dollar remain the premier choices for global business, their status is not permanently assured. Despite the practical obstacles that remain in the short and medium term, the attractiveness and efficacy of alternative financing mechanisms is likely to continue to increase over time, ultimately contributing to a profound erosion of central tools of U.S. power and influence.

Though this dispute may not in itself lead to a full breach in the transatlantic relationship, it joins a growing list of sharp disagreements, the cumulative burden of which is weighing heavily on U.S. alliances.

James Hoobler is a policy analyst at the nonprofit, nonpartisan RAND Corporation.

This commentary originally appeared on American Institute for Contemporary German Studies on May 29, 2018. Commentary gives RAND researchers a platform to convey insights based on their professional expertise and often on their peer-reviewed research and analysis.