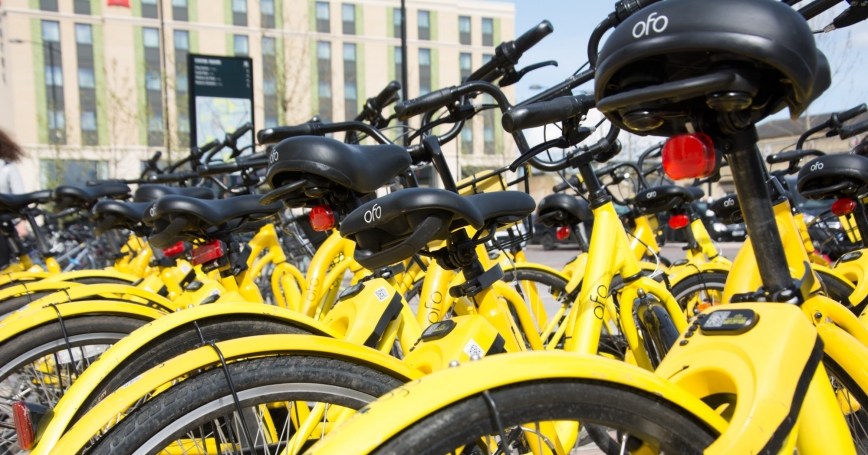 Ofo cycles lined up and ready for use at a railway station, Cambridge, UK, April 26, 2018

If you live in the Cambridge area, it's likely that you will have seen yellow bikes dotted across the city in the past year.

The bikes are part of a dockless bike-sharing scheme from the China-based company ofo.

For the price of 50p per half hour and a maximum daily cap of £5, Cambridge residents can collect, ride and leave the bikes anywhere traditional bike parking is allowed, with an app required to find and unlock the nearest yellow bike.

Ofo specifically selected Cambridge as the launch for its first UK dockless bike-sharing platform, possibly due to the city's love of bikes. According to Cycling UK, more people cycle at least three times a week in Cambridge than in any other local authority in the UK.

By encouraging more people to cycle, ofo and other bike-sharing platforms could provide many potential benefits to the city through reduced congestion, reduced air pollution and health benefits. However, such schemes do pose challenges related to pressures on existing cycling infrastructure due to the increase in new bikes, and theft and vandalism of the bikes.

In China, the effects on air pollution and traffic from bike-sharing have been positive. A report by the China Internet Network Information Center stated that 7 trillion tonnes of carbon emissions have been avoided as a result of its 'bike-share boom'. Meanwhile, the Chinese Ministry of Transport estimated that bike sharing has reduced the costs of congestion in China by 16.1 billion yuan (£1.81 billion), with an additional 200 billion yuan (£22.5 billion) in other social and health benefits.

Bike-sharing could help Cambridge's air pollution and traffic problems. Lewis Herbert, the leader of Cambridge's City Council, has stated that a limit needs to be placed on petrol and diesel vehicles accessing the city centre to reduce air pollution and traffic. A study from the insurance firm Admiral found Cambridge to be the 'congestion capital' of the UK, with commuters spending the equivalent of 23 days a year stuck in traffic.

The Asian experience also indicates that bike-sharing schemes have been extremely popular. In 2017, Reuters reported that bike-share platforms in Asia have grown so fast analysts can't keep up and data is invariably outdated. In China alone, there were 221 million bike-share users in China by the end of 2017, nearly double the 115 million users from just six months prior.

Despite a large number of Cambridge residents owning their own bikes, the ofo bike scheme in the city has largely been a success, increasing from 20 bikes when the platform launched in spring 2017 to 450 bikes within a year. Many residents may find that the cost of bike-sharing of 50p per half hour is less than the costs of bicycle ownership after factoring in the purchase price, maintenance, storage, secure parking and risk of theft.

However, public acceptance of bike-sharing can be tested when dockless bikes are left abandoned or 'dumped' in inconvenient places. In Washington DC, the dumping of dockless bikes on footpaths and private driveways caused residents to complain to local authorities and law enforcement.

One potential reason why bikes are abandoned or 'dumped' is the lack of cycling infrastructure. When the ofo bike scheme launched, Al Storer, a committee member of the Cambridge Cycling Campaign, a campaign group aiming to encourage better and safer cycling in the city, expressed concern that not enough cycle parking exists in the city centre, particularly in light of new bike-sharing schemes.

To counter this problem, Cambridge City Council has already introduced a voluntary code, for dockless bike-sharing companies to follow. The code states that companies are expected to ensure that their bikes are not left in areas where they would cause an obstruction. Companies must provide guidance to users and establish penalties for those who ignore it. The companies have also pledged to work with public organisations and private landowners to establish more cycle hubs.

Vandalism and theft remains a significant issue for dockless bike-sharing. One bike-sharing company had to shut down service in France after experiencing what it described as the “mass destruction” of its fleet. Some cases of vandalism have been reported in Cambridge and other UK cities, but overall such incidents have been fairly isolated.

Dockless bikes do bring infrastructure and crime challenges to cities, but China has shown bike-sharing can work. Not only is Chinese demand high, but the related schemes are providing a range of positive environmental, health and transport benefits to cities.

Despite initial reservations from the public, the ofo bikes in Cambridge have largely been a success so far, demonstrated by the significant increase in usage over the past year. If dockless bike-sharing companies continue to work with local organisations, local government and the public to improve infrastructure and reduce the misuse of the bikes, then there is no reason why their schemes cannot go from strength-to-strength.

Julian Glenesk is a transport researcher at RAND Europe, a Cambridge-based not-for-profit research organisation. The op-ed is based on analysis that appeared on the Observatory for a Connected Society.

This commentary originally appeared on Cambridge Independent on May 31, 2018. Commentary gives RAND researchers a platform to convey insights based on their professional expertise and often on their peer-reviewed research and analysis.