Five Thoughts on Jerusalem, Gaza, and What's in Between 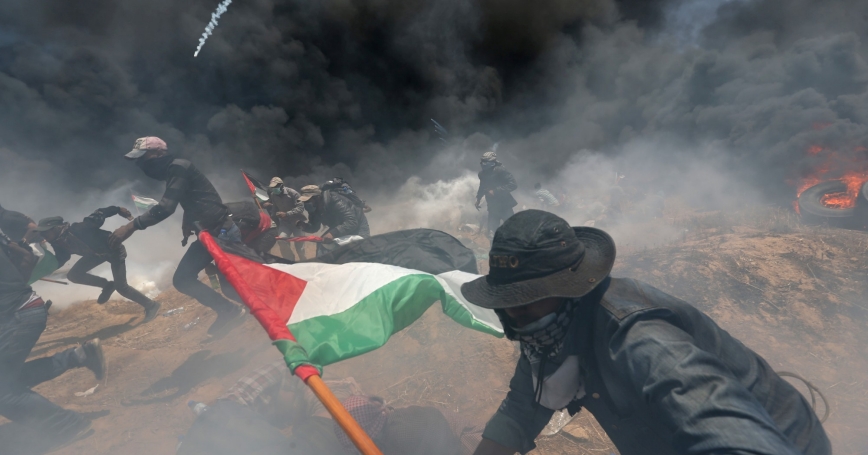 Palestinian demonstrators run for cover from Israeli fire and tear gas during a protest against the U.S. embassy move to Jerusalem and ahead of the 70th anniversary of Nakba, at the Israel-Gaza border, May 14, 2018

Dozens of people have been killed and more than 2,000 injured in protests in the Gaza Strip along the border fence with Israel. This is the largest number of fatalities suffered in one day since the war between Israel and Hamas in 2014 known as Operation Protective Edge.

The violence took place as Israel celebrated the opening of the U.S. embassy in Jerusalem, just 50 miles from Gaza. While it is tempting to attribute the violence solely to the Jerusalem move, here are five points that suggest that the reality is more nuanced.

Hamas should not drag all sides into a war that no party seems to want. Hamas reportedly signaled to Israel late Monday that it would consider changing the nature of protests. That is a positive sign. The organization could demonstrate that it is willing to make more substantial changes so that the PA resumes its presence in Gaza.

The PA, whose punitive measures against Hamas have led to further deterioration in living conditions in Gaza, could help (PDF) the reconstruction process and not stand in its way.

Israel, Egypt, and the international community could work to alleviate the humanitarian situation in Gaza by opening the border crossings to allow in more fuel and goods and relax its restrictions on movement of people in and out of the strip.

Allowing the 5,000 residents of Gaza that were vetted by the Shin Bet, Israel's clandestine security service, to work in Israel could be a first step that would not only indicate goodwill but also improve the economy by providing livelihood for tens of thousands of people.

The United States could help by quickly resuming payments to the United Nations Relief and Works Agency, the U.N. fund that supports Palestinian refugees, whose funding cuts have taken an additional toll on Gaza's population that completely depends on the organization for employment, health services and education.

Finally, Israel should also think strategically about its long-term relationship with Hamas and not dismiss the long-term ceasefire proposed by the organization only last week.

Shira Efron is an associate policy researcher at the nonprofit, nonpartisan RAND Corporation, a special advisor on Israel with RAND's Center for Middle East Public Policy and a professor at the Pardee RAND Graduate School.

This commentary originally appeared on The Hill on May 15, 2018. Commentary gives RAND researchers a platform to convey insights based on their professional expertise and often on their peer-reviewed research and analysis.