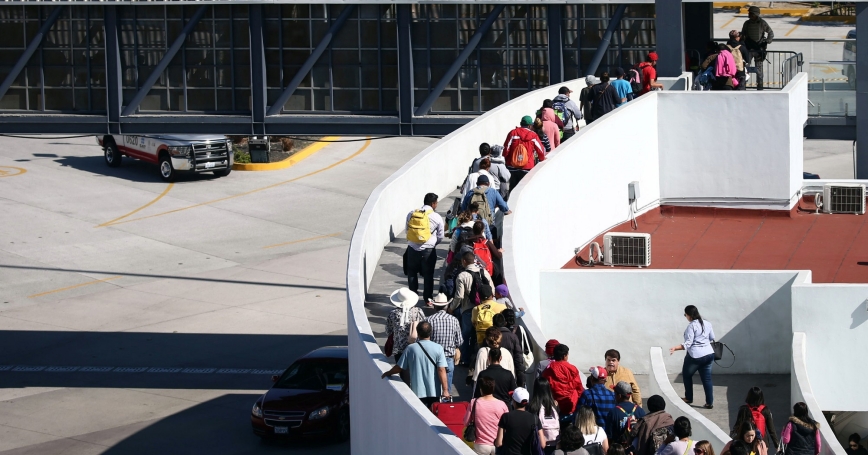 Migrants from Central America enter the United States Border and Customs facility, where they are expected to apply for asylum, in Tijuana, Mexico, May 4, 2018

Apprehensions of illegal immigrants reached an all-time low during the first year of the Trump administration. But over the past six months, the U.S. has seen apprehensions of illegal immigrants rebound to the levels observed at the end of the Obama administration—which nevertheless still rank among the lowest (PDF) in the last 40 years. Recently, the Trump administration announced significant policy changes in an effort to deter migrants from coming to the United States.

On May 4, the Secretary of Homeland Security implemented a new policy that will result in Border Patrol agents referring for criminal prosecution all adult migrants apprehended trying to enter the country illegally. On May 7, Attorney General Jeff Sessions confirmed this change in policy and noted that he had asked his prosecutors to “take on as many of those cases as humanly possible until we get to 100 percent.” While these changes will likely have a significant impact on border operations and the federal court system, it is less clear whether they will have the intended impact of reducing illegal immigration—and they may well have unintended consequences for which the administration and Congress could prepare.

It is important to note that the administration is well within its legal rights to take this action. The Immigration and Nationality Act stipulates that crossing the border illegally is a criminal act—a misdemeanor offense—that carries with it a penalty of up to six months in prison for first-time offenders.

Much of the public debate about this decision has focused on the impact it may have on families who are apprehended by the Border Patrol—specifically that parents will be separated from their children and referred for prosecution. The children would then be treated as unaccompanied alien children and referred to the Department of Health and Human Services (HHS) for placement in the least restrictive setting that is in the best interests of the child—as is required by law (PDF).

In practice this means that the parents will generally be placed in detention to await their day in federal court, while the children will be placed with other family members already in the U.S. or put into the foster care system. The prospect of separating parents from the children has alarmed immigrant and human rights advocates, and there may be some legal questions about whether that separation is in fact “in the best interests of the child.”

Much less attention has been given to the unintended consequences that this decision may have. One of these consequences could be to clog up the federal courts with thousands of misdemeanors. Authorities have rarely prosecuted migrants solely for crossing the border illegally unless they were also engaged in some other criminal activity—smuggling narcotics, for example.

The Department of Justice and its federal prosecutors have generally been reticent to tie up the courts and their staff on misdemeanors—or even for other more serious crimes that still fall below certain criteria.

Another unintended consequence could be to put substantial strain on the nation's official border crossings, or ports of entry. This is because migrants who are seeking to enter the asylum process could choose to enter at ports of entry, where they would not be prosecuted, rather than trying to cross the land border illegally away from ports of entry, where they would be. As I've pointed out in previous articles, the vast majority of family units encountered at the border are not trying to evade detection but rather seek out border officials in order to claim “fear” and attempt to enter the asylum process. Up until now, these families have been generally agnostic about where they choose to cross into the United States.

The last time there was a surge of migrants claiming fear at the ports, Customs and Border Protection was forced to undertake extraordinary measures—such as building temporary detention facilities to house individuals and restricting the number of people who were allowed to enter. Not surprisingly, neither of these measures were popular with the Mexican government—which is a key security partner of the United States and which has been helping to reduce illegal immigration through unprecedented enforcement actions on its border with Guatemala.

As the administration begins to enforce this new policy, there are a number of steps it would be well served to consider. First, it could ensure that contingency plans are in place should U.S. ports—which are vital to commerce, tourism, and the economy—begin to see increases in people and family units claiming asylum. Second, given limited resources, federal prosecutors could be given concrete guidelines concerning which kinds of criminal acts will be de-emphasized in order to prioritize prosecuting the misdemeanor crime of illegal entry. And third, the HHS could be given sufficient resources and capacity to handle another influx of unaccompanied children.

Blas Nuñez-Neto is a senior policy researcher at the nonprofit, nonpartisan RAND Corporation. Prior to joining RAND, he served as a senior advisor to the Commissioner of U.S. Customs and Border Protection.