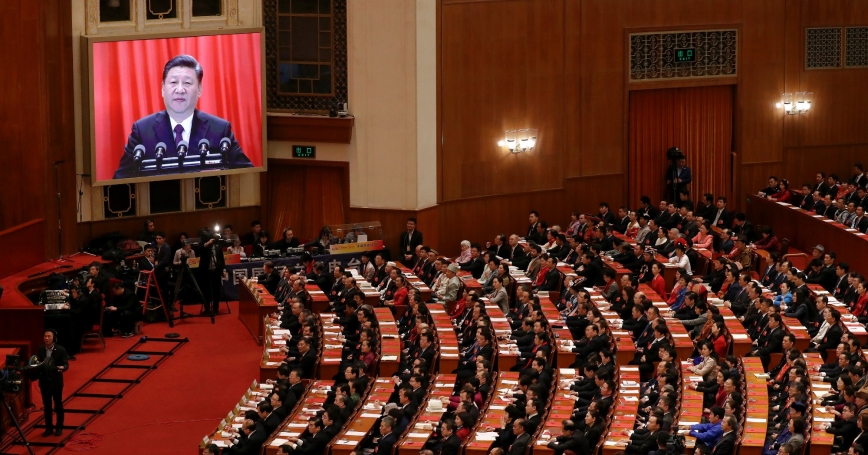 Chinese President Xi Jinping delivers his speech at the closing session of the National People's Congress at the Great Hall of the People in Beijing, China, March 20, 2018

Forty years after China embarked on the economic reforms that have helped transform it from an isolated and impoverished communist outpost into an increasingly confident and capable global power, a growing number of observers in the United States have, understandably, concluded that Washington adopted the wrong strategy toward Beijing. Their judgment is largely rooted in two propositions. First, the United States was mistaken to assume, or hope, that China would become more democratic as its economy grew. Second, by persisting with efforts to integrate China into the postwar international order, the United States ultimately enabled the rise of a country that now stands not only as its principal competitor, but also as its putative replacement on the global stage.

It is difficult to dispute the first point, although Elizabeth Economy of the Council on Foreign Relations rightly cautions that “political change is a long game, and the game is not over.” Especially under Xi Jinping, however, Beijing has taken a decisively authoritarian turn—cracking down more aggressively on foreign nongovernmental organizations, more explicitly renouncing Western values and governance, and consolidating what may well be the world's most intrusive, far-reaching surveillance state. With the Chinese Communist Party's decision to end presidential term limits, moreover, Xi is poised to preside over China for as long as he lives. The New Yorker's Evan Osnos observes that China is “reentering a period in which the fortunes of a fifth of humanity hinge, to an extraordinary degree, on the visions, impulses, and insecurities of a solitary figure.”

But the second point—that the U.S. has aided the rise of its now-chief competitor—is more debatable. Could the U.S. have either stalled China's progress indefinitely or cultivated a less formidable competitor?

Because of the multitude of differences that define U.S.-China relations, it is virtually impossible to imagine that China would have developed into a U.S. ally. Their histories and cultures aside, the U.S. prides itself on being the world's most successful experiment in democracy, while China regards Western-style pluralism as a threat to its survival. Yet there are two paradoxical similarities between the two countries. First, China largely believes itself to be unique in the annals of human history, though it neither proclaims its exceptionalism as loudly nor proselytizes its singularity with nearly the same vigor as the United States. Second, having spent most of its history atop an Asian-Pacific hierarchy, China has neither experience in nor enthusiasm for sustaining an international system in partnership with an approximate peer.…

This commentary originally appeared on World Politics Review on May 8, 2018. Commentary gives RAND researchers a platform to convey insights based on their professional expertise and often on their peer-reviewed research and analysis.