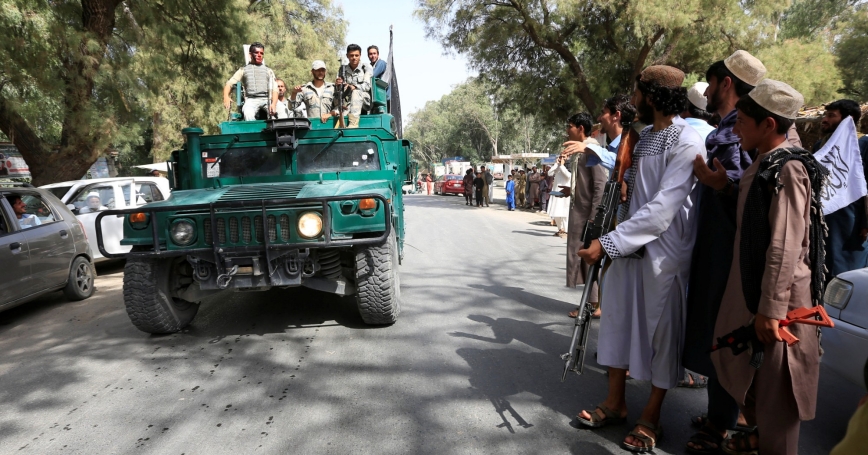 A Taliban (R) stands as Afghan security forces ride on an army vehicle during a celebration of a ceasefire in Nangarhar province, Afghanistan, June 16, 2018

In a place where war has dragged on for nearly 17 years—or for four decades, if you're an Afghan—any sign of hope for peace should be welcomed.

Two parallel ceasefires abruptly announced for the end of the holy month of Ramadan brought some respite from the violence, for an eight-day period on the Afghan government's part, and for three days on the part of the Taliban, ending last Sunday. This was an unprecedented development, but was it an opening for resolution of the conflict?

The brief ceasefires don't in and of themselves change the conflict dynamics. And the fact that they were each announced unilaterally rather than negotiated doesn't put them in the same category as ceasefires that elsewhere have been deliberate, agreed steps in a peace process, used to mutually build confidence in the other side's willingness to pursue peace.

But the twin ceasefires offer three important clues about what might be possible in Afghanistan.

First, the widely-seen photos and reports of Taliban fighters, government officials, security force personnel and civilians mingling, breaking the fast together, embracing and snapping selfies seem to confirm that the Afghan people on both sides are tired of war and that even fighters would like to find a way out of perpetual fighting.

Even before the recent events, regular reports in recent years of localized ceasefires also seem to confirm that, at the ground level of this war, there is an ability to conceive of accommodations to reduce violence.

None of these indications and anecdotes demonstrate how widespread the sentiments are that appeared to be on display. But it is logical to assume that most Afghans, like most people anywhere, would greatly prefer peace to war.

The images of recent days should at least prompt decision-makers on all sides to reflect on the potential for a meaningful proportion of fighters to be willing to buy into some form of peace.

Second, the ceasefires threw light on both sides'—but most notably the Taliban's—ability to dial down violence. Although Taliban leaders have on some occasions decreed restraint in certain usages of violence, it has been an open question whether, in the context of peace initiatives, they could exercise sufficient command and control over their fighters' conduct to implement agreements.

Because a real peace agreement will be a lot harder to implement than temporary ceasefires, getting fighters to follow through on the latter doesn't definitively prove that they would abide by their leaders' directives on the former.

Nonetheless, the ceasefires are a helpful indicator and might build confidence that steps toward peace agreed by leaders could be realized.

The days in which the two ceasefires overlapped were not entirely peaceful. The ISIS branch that gained a foothold in Afghanistan beginning in 2015 claimed responsibility for at least one of two attacks on joint gatherings of Taliban and government forces.

This sad reality points to the third clue revealed by the ceasefires: ISIS in Afghanistan is an enemy of both the Afghan government and the Taliban, as well as the United States. So there is some basis for hope of eventually making common cause, and a combined effort, against this foe.

The fighting has now resumed. Afghan President Ashraf Ghani proposed to extend the ceasefire, and the Taliban said no. This is unfortunate, but not terribly surprising.

The Taliban see the U.S. as their main opponent and the real power behind the Afghan government, and they are not likely to let themselves be seen as taking up initiatives offered directly from Kabul.

Regardless, the visible, even if limited and fragile, manifestation of interest in and possibility of peace that the ceasefires provided should encourage U.S. leaders to test the potential to push for much more than a brief hiatus.

Secretary of State Mike Pompeo issued a statement on June 16 saying that the United States “stands ready to work with the Afghan government, the Taliban and all the people of Afghanistan to reach a peace agreement.”

He went on to say that the U.S. was prepared to participate in peace talks that “by necessity would include a discussion of the role of international actors and forces.”

This may be the most forward-leaning statement by a senior Trump administration official on U.S. interest in pursuing a negotiated settlement; it is certainly the closest the administration has come to acknowledging that the question of withdrawing foreign troops from Afghanistan has to be on the table.

You can't have peace talks without being prepared to at least discuss the other side's main demand.

The test of U.S. will to negotiate a settlement could hinge on whether a statement such as this is followed by concerted action, with a level of U.S. engagement in peace-making that has not yet been evident. Invading Afghanistan and trying for 17 years to stabilize it has required an enormous American commitment.

A vigorous, well-resourced diplomatic initiative with strong political backing could shift the gears of U.S. policy and drive the conflict to a negotiated conclusion.

This commentary originally appeared on The Hill on June 24, 2018. Commentary gives RAND researchers a platform to convey insights based on their professional expertise and often on their peer-reviewed research and analysis.