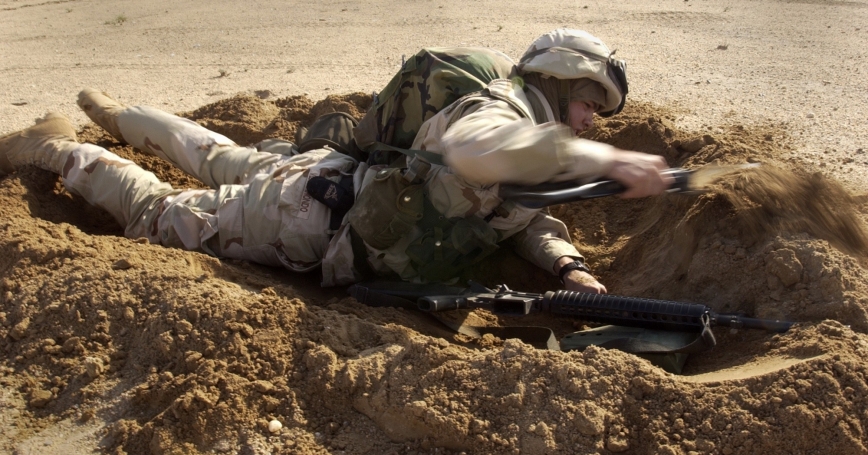 A recent Task & Purpose article mentions the “trusty” e-tool among various “vet-tested” gear items for peacetime hiking. Without making too much of a casual gear recommendation, it is worth asking if the just over two-pound e-tool (without case) is too much tool for a peacetime camping trip while considering its effectiveness as an actual wartime “entrenching” tool. Do you really know your e-tool as well as you think you do?

First, it's worth noting that there is no need to bring along stuff just because you got it from the military—it's finally your own pack and your very own Mission Essential Equipment List. Getting out into nature on a peacetime backpacking trip can be great for the soul, even fun, especially particularly if you intend just a walk in the sun. Put in the trauma dressing, sure; it's very light and stuff happens. But think about everything else and why it is worth carrying that weight.

Now the real question: Why do you need to pack a digging tool in the backcountry? If the principal reason is your need to dig a cathole latrine, think about getting one of those polycarbonate trowels for five bucks that only weigh three ounces. The tools are more than capable for a cathole or a drain channel around your tent and are virtually impossible to lose in their near-fluorescent colors. If you think you need a pounding option, you might consider the cornucopia of rocks usually available on-site; if you think you need something for cutting trees, the park ranger would prefer you leave it in the car. An e-tool will work, but it's probably more tool and more weight than required.

So why is the e-tool so essential for wartime entrenching? Well, e-tools originated to scrape a bit of hasty cover while prone under fire, and for that, it is as good as any other handheld shovel. But the e-tool is more often used for larger holes while not under direct fire. In the first stage of turning a hasty position into a two-person infantry fighting position, each soldier's share of the excavation is roughly 30 cubic feet. This is about 300 times the volume of a cathole. Is the e-tool really up to this bigger job?

I do not claim experience with the current tool, but I had a close relationship with a Model 1951 entrenching tool that added a short pick point to the World War II-era folding tool that brought its weight up to three pounds without the case—and I can tell you that anyone who has dug foxholes or infantry fighting positions with any e-tool has probably learned similar lessons, all of them are sad.

In digging with an e-tool, diggers reproduce, as closely as they can, swinging a pick to break up the soil and then using a shovel to remove the loosened dirt. The small tools force contortions on full-size people just to bring the tool in contact with the ground, the tools are lousy at breaking up the soil, cutting roots or moving rocks, fragile when swung with power as a pick, and hold little soil when used as a shovel. This is no way to dig out 30 cubic feet.

The requirement for the Infantry Fighting Position, sometimes called the DePuy Fighting Hole, came from General William DePuy's vision of future war with the Soviet Army. Army Training and Doctrine Command Bulletin 9 of 1977, the Infantry Fighting Position, explains its rich doctrinal and empirical background. It is clear DePuy knew digging such positions would need more than e-tools: When he commanded 1st Infantry Division in Vietnam, he ordered digging in along the same lines he would later make doctrine at TRADOC. To make sure his orders could be carried out, he had helicopters deliver picks, axes, d-handle shovels, and saws. Getting appropriate tools to the troops was always accepted as part of the task.

Operations since 2001 have not emphasized the features DePuy saw as the future of war against large and capable Soviet forces. But should we see them now in a new vision of future war that includes the possibility of war with Russia? Maybe today's vision doesn't need any holes, maybe it's just all big ideas, AI, all-seeing surveillance and death rays, but Army Chief of Staff General Mark A. Milley's future vision has grim undertones that suggest holes, real holes, still have a martial future.

In that case, the Army should think how it gets real tools into the hands of soldiers. For soldiers carried in future Strykers or infantry fighting vehicles, the simplest way might be to expand the vehicle's pioneer toolset (now usually one shovel, one pick, and one ax, all full-size). What about infantry without vehicles? If General Milley's vision comes true we can be sure helos will not be delivering them. If one of the robot pack mule projects is ever successful, a load of picks and shovels might be a worthwhile high-priority cargo.

So, we generally trust the e-tool, perhaps uncritically. But in a peacetime hike, we might only need a polycarbonate trowel. In a future war, we might really need full-size picks and shovels. However ingeniously designed, two pounds of metal origami cannot replace a full-size pick and a shovel.

James T. Quinlivan joined the nonprofit, nonpartisan RAND Corporation in 1979. He came from aerospace where he was a system engineer working on missile and classified projects. At RAND, he was a program director in Project AIR FORCE. He was later vice president of the Army Research Division and director of the Arroyo Center. He has published in journals including Parameters, International Security, and Marine Corps Gazette. He served with the U.S. Army in Vietnam.

This commentary originally appeared on Task & Purpose on June 11, 2018. Commentary gives RAND researchers a platform to convey insights based on their professional expertise and often on their peer-reviewed research and analysis.