From Florida's Farm Fields, Lessons for #MeToo and Other Movements 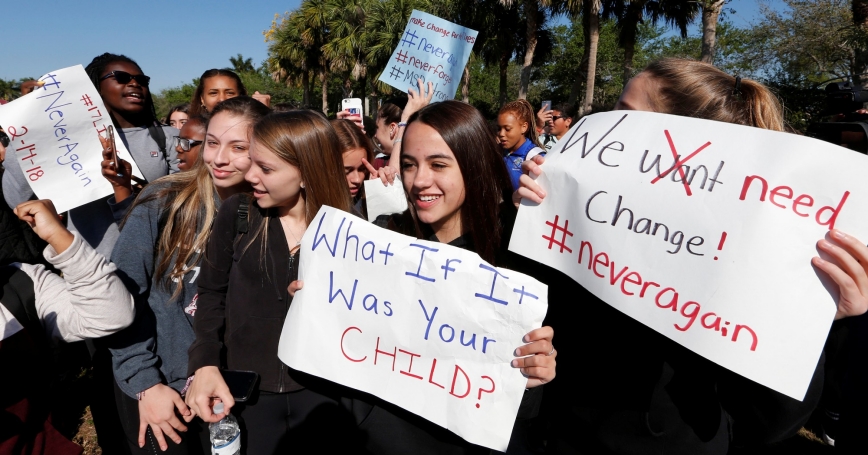 Students march as part of a national school walkout on March 14, 2018 to honor the 17 students and staff members killed on February 14 in Parkland, Florida

Issues that have been with us for a very long time are suddenly hashtag movements: #MeToo and #TimesUp. #MarchforYourLife. The movements behind these viral hashtags are taking on persistent and complex problems with which society has long struggled, such as the fear or simple reality of sexual harassment and violence in the workplace, or gun violence and the balancing of individual and societal rights. These national movements share a common thread — they call attention to the problem in a very public way and hold out the possibility of finding new solutions.

Potential solutions are coming from what might be considered unexpected places: restaurant kitchens, Hollywood production lots, high schools and corporate offices. Present-day organizers who want to bring about social change would do well to look to Florida farmworkers who took on the low wages, physical abuse and vulnerability that have long characterized agricultural labor in the United States — and won, changing the culture for the better.

I witnessed this phenomenon firsthand while doing research starting in 2010 for my book on the farmworkers behind the Coalition of Immokalee Workers and the Campaign for Fair Food. The coalition developed a model for achieving real and sustainable societal change for farmworkers and put that model in place by forging a partnership between farmworkers, growers and major corporate retailers including Taco Bell, McDonald's, Whole Foods and Walmart. On participating farms, the coalition's worker-driven Fair Food Program has eliminated abuse, including the wage theft, beatings and sexual violence characteristic of large-scale agricultural work, and increased worker pay by 70 percent or more. More than 35,000 workers are the better for it.

Real and sustainable change can be driven, designed and implemented from inside the communities most affected.

The new movements appear to understand one pillar of the coalition's success — real and sustainable change can be driven, designed and implemented from inside the communities most affected. These new voices from the fields, from film studios and from classrooms in such places as Chicago and Parkland, Fla., are powerful in part because they are fighting for their own basic human rights. They are trying to drive change from the ground up instead of from the top down.

A key lesson from the coalition: To change the system, you need to understand it from end to end. Florida's farmworkers realized that the food chain runs from farmworkers to crew bosses to growers to corporate buyers like Taco Bell and Walmart. The power is at the top of the chain but powerful corporate brands are vulnerable to changes in consumer opinion about issues like worker abuse and, in the case of farmworkers, slavery. This vulnerability gave coalition farmworkers and their allies the ammunition to compel buyers and growers to join the Fair Food Program partnership to protect their brands and help them wake up to the basic rights of the workers on whom they depend. The #MeToo movement has uncovered a similar vulnerability by connecting with consumers and constituents to put pressure on celebrity chefs, members of Congress and Hollywood producers.

The networked nature of the world and the broad reach of social media have underscored another coalition lesson: the power of a coherent and compelling story that can be shared directly to consumers, uncurated by traditional media outlets or delayed by news cycles. The organic nature of the story — regardless of what it grows out of — has the ability to turn a "policy issue" into a human issue, resonating with those who can collectively pressure corporations and perhaps even legislators to rethink constraints that have prevented them from fixing a corrosive problem.

As women have shared their stories of sexual harassment, and students have turned grief into action to try to change gun policy, they have brilliantly used social media to gather allies and those with shared experience into new communities that can work together for change — much like the coalition did and does. Just as corporations such as McDonald's and Walmart joined the coalition's Fair Food Program, big-box stores like Dick's Sporting Goods (and Walmart once again) and other businesses have used their retail power to put restrictions on gun sales. Congressmen, Hollywood producers and celebrity chefs have been held accountable for their behavior.

In their success, the Coalition of Immokalee Workers has shown a way to bring systemic change to an entire industry. The coalition looked beyond the campaign for worker rights, designed the uniquely comprehensive Fair Food Program and, when they won their fight, paid attention to the details of putting the program in place. The coalition did not just pressure corporations and growers to change. It developed and led the implementation of the change that workers called for. Instead of looking for legislation and enforcement, the coalition wrote the standards, established a system to monitor compliance and held corporate buyers to enforcing market sanctions for violations. This is a new, community-driven model for solving intractable problems.

Effecting real and sustainable change — to work to change people's lives for the better — often requires courage, creativity, persistence and time. Lots of time. A final lesson from the reformation of Florida's farm fields: In looking for new and different ways to address long-standing and stubborn issues, be willing to do the hard work of designing and even implementing solutions — and persist, persist.

Susan L. Marquis is dean of the Pardee RAND Graduate School and vice president for innovation at the nonprofit, nonpartisan RAND Corporation. She is the author of "I Am Not a Tractor!" (Cornell University Press), a recently published book about farmworkers in Florida who are transforming American agriculture.