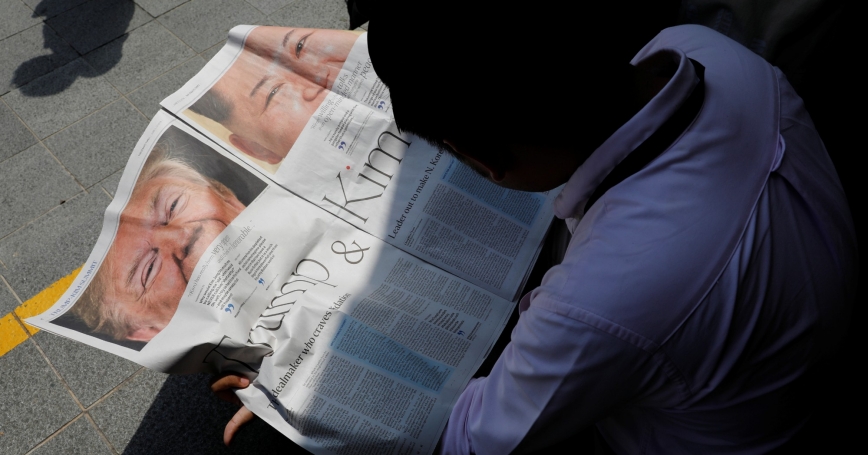 The summit between President Trump and North Korean leader Kim Jong Un is set for Tuesday — and the skeptical voices are out in force.

“Trump Veers to a Korea Plan that Echoes Failures of the Past,” worried the New York Times. The Washington Post reported concerns that the administration is in the process of “handing propaganda victories to North Korea.”

To be sure, North Korea's intentions should always be treated with suspicion. But a new RAND paper points to the need for bold thinking on security issues in Korea — for the simple reason that returning to business as usual is not a sustainable option.

Kim's peace overture is entirely self-interested, seemingly aimed at the economic revitalization of his regime. But it also offers a fateful strategic opportunity for the United States.

The most obvious reason why is the lack of a viable alternative. If talks fail, the U.S. would presumably return to a strategy of “maximum pressure” and threats of military action. But if Pyongyang can muddy the waters, the pressure strategy might fall apart, and military action carries tremendous risks.

In more positive terms, even modest economic engagement would foster the long-term transformation of North Korean society, which is already well underway.

While it remains an authoritarian state, the North is full of private markets, flows of outside information (including South Korean pop music and soap operas), profit-seeking entrepreneurs and consumerist elites. If better relations accelerated that process, they could boost the prospects for change.

Economic and political ties also provide leverage to nudge North Korean behavior. South Korea could lament that Hyundai would love to build a new car factory in the North — if only those pesky cyber attacks on South Korean government agencies would stop.

The most important reason to seek a transformation of the security context in Korea stems from the burgeoning cost of planning for Korean military contingencies.

But perhaps the most important reason to seek a transformation of the security context in Korea stems from the burgeoning cost of planning for Korean military contingencies. What's not generally recognized is how fast those demands have been growing, and the burden they place on U.S. defense resources.

The time-honored U.S. role on the Korean Peninsula has been to help South Korea deter a 1950-style, all-out North Korean invasion. That mission is relatively straightforward. But over time, under the shadow of the North's growing nuclear capabilities, tougher missions have loomed larger.

In some scenarios, U.S. forces would have to help South Korea stage offensive operations into North Korea to clear out artillery threatening Seoul, or move even farther north to find North Korean nuclear weapons.

Any plan to preempt the North's nuclear assets could easily tumble into a wide-ranging campaign, necessitating a full-scale invasion of the North.

The new RAND paper examines the military requirements of such contingencies, which are far more challenging than simple deterrence. Each would “place massive, perhaps unsustainable, demands on Army capacity and specific high-demand, low-density capabilities,” the paper concludes.

These demands, moreover, couldn't be emerging at a worse time: Amid escalating global competition with major powers, Washington must find ways to ease the growing strains on U.S. military posture. But the trajectory in Korea is running in exactly the opposite direction.

The ongoing process of summitry offers an opportunity to arrest this trajectory by building on steps toward denuclearization with the first parts of a comprehensive peace regime, something that could gradually transform the security context in Korea.

Such an arrangement could include a formal peace treaty replacing the armistice that ended the Korean War and a multilateral guarantee of non-aggression under U.N. auspices, in which China and Russia would join the U.S. in ruling out armed attacks.

It could provide for the deployment of peacekeepers in a truly demilitarized border area, deep cuts in conventional forces (especially forward-deployed ones) and transparency in military activities, such as networks of sensors and inspectors. The goal would be to make large-scale offensive warfare effectively impossible.

In such a context, U.S. forces would not need to play their same deterrent role, and the risk of bigger missions would mostly disappear. The U.S. would remain fully committed to the alliance with South Korea: Should North Korea attack, the U.S. would still respond with air and maritime forces and deploy ground forces as necessary.

But the multiple guarantees against aggression would allow the U.S. to remove a major Korean conflict from the top rungs of its defense planning roster, freeing resources, intellectual energy and diplomatic capital for other worries.

Of course, North Korea might reject these ideas. Kim might refuse any cuts in his forward-leaning units until U.S. forces are gone. He might spurn any inspection regime, or the idea of peacekeepers in Korea.

Seoul and Washington have an unprecedented opportunity to test just how far Kim is willing to go in his drive for economic growth.

But Seoul and Washington have an unprecedented opportunity to test just how far Kim is willing to go in his drive for economic growth.

The opportunity to reap these strategic rewards suggests that the U.S. has an incentive to be flexible on the key roadblock to a comprehensive deal: the degree of North Korean denuclearization required in the initial phases.

The temptation will be to press for a comprehensive — and probably infeasible — degree of disarmament. But if the U.S. overplays its hand, the whole thing could unravel, and Washington would be blamed.

One alternative would be a package (PDF) of immediate but incomplete steps (a ban on missile and weapons testing and ICBM deployments, razing key nuclear facilities, a full declaration of nuclear assets and the symbolic surrender of some amount of fissile material) and a formal pledge of full denuclearization within a longer, but reasonable, time frame.

President Trump has said he would like to help bring about peace in Korea. Even without fully trusting North Korea's motives, the world may be tantalizingly close to profound steps in that direction, steps with major strategic advantages for the United States.

This commentary originally appeared on The Hill on June 11, 2018. Commentary gives RAND researchers a platform to convey insights based on their professional expertise and often on their peer-reviewed research and analysis.