Potential Changes to Paternity and Parental Leave in Europe 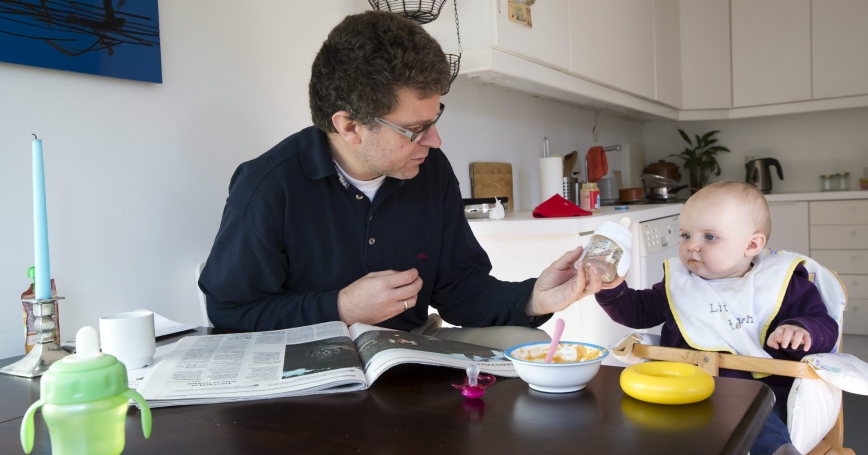 Peter Talos feeds his daughter Karin, as they spend time together during his parental leave, in Oslo, Norway, October 5, 2012

Fathers' involvement in childcare has considerable benefits for their children, mothers, employers, and themselves. It improves child development, gender equality, work-life balance, and work productivity, and it brings greater personal satisfaction. These benefits illustrate why paternity and parental leave are important, but pay, flexibility, and eligibility remain significant barriers to uptake by fathers across Europe.

Although both forms of leave sound similar and are for broadly the same purpose—fathers taking time off to support the care for their children—paternity and parental leave are different. Paternity leave is a short period of leave available to fathers immediately after the birth of a child. Parental leave is a period of leave that fathers can take to care for their children in the first years of their life.

Across Europe, fathers commonly take a few days off immediately after their child is born, usually through paternity leave, but they rarely extend this into longer parental leave. In fact, 90 per cent of fathers across the EU do not use parental leave entitlements.

Most EU member states offer some form of paternity leave and parental leave, but there are large variations in terms of the leave length and compensation levels. Seventeen member states offer two weeks' paternity leave from the time of child birth. However, of these countries, only 13 offer two weeks of what's described as 'well-paid' paternity leave, which is defined by the European Commission as at least 66 per cent of a worker's earnings before they start leave. Low compensation levels are identified as one of the strongest disincentives to take paternity or parental leave.

The new directive proposes the introduction of paternity leave of at least 10 days around the time of the birth of the child. The proposed change is likely to have little impact on Finland, which offers nine weeks paternity leave, but it could impact other member states, such as Croatia, Denmark, and Slovakia, which currently offer no paternity leave. The new directive also suggests that compensation levels should be increased to at least the equivalent of the sick pay level. Recent debate in the European Parliament proposed increasing the compensation level to at least the equivalent of 75 per cent of the worker's gross wage, but this is still under discussion.

With regard to parental leave, the new directive has proposed a length of four months as a minimal entitlement. Currently, only 10 of the member states offer leave that is four months or longer, including just three countries where leave is well-paid.

The directive would also establish parental leave as a non-transferrable right to encourage fathers to be more involved in childcare. Research shows that the uptake of parental leave was much higher among fathers when this policy initiative was in place. However, only 10 EU member states have a period of parental leave reserved especially for fathers. In addition, this entitlement can be transferred across to mothers.

The proposed policy changes from the new EU directive are progressive. Guaranteeing paternity and parental leave length, providing greater compensation levels for leave, and guaranteeing leave entitlement for fathers are all likely to help families, children, and employers. However, whether they will make a difference in fathers' uptake of paternity and parental leave remains to be seen. Ultimately, any policy changes may need to go further in addressing the cultural norms and perceptions of gender roles in childcare to make meaningful change across Europe.

Barbara Janta is a senior analyst in the Home Affairs and Social Policies research group at RAND Europe. She is involved in research for the European Platform for Investing in Children (EPIC).

This commentary originally appeared on E!Sharp on June 25, 2018. Commentary gives RAND researchers a platform to convey insights based on their professional expertise and often on their peer-reviewed research and analysis.