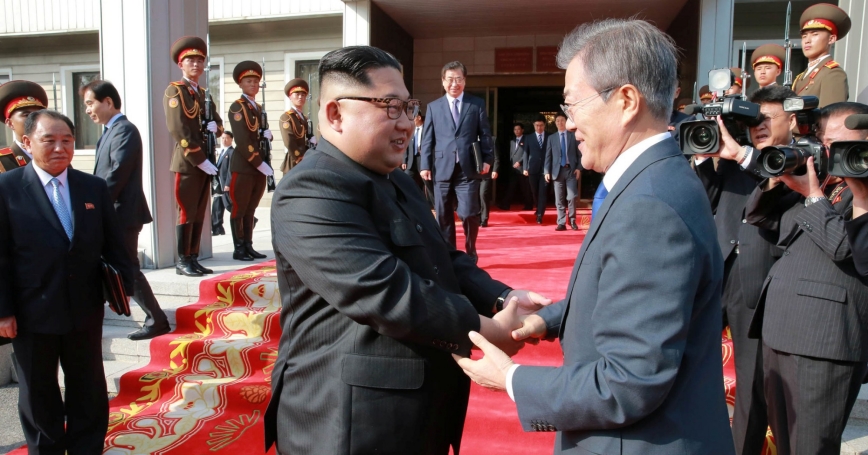 Earlier this month, I participated in a think tank delegation to South Korea to discuss the latest developments following President Trump's June 12 summit with North Korean leader Kim Jong-un in Singapore to denuclearize the Korean Peninsula. We met with a range of senior-level government officials, think tank experts, academics, journalists, as well as others, and the message was consistently and resoundingly clear: South Korea's Moon administration is cautiously optimistic Kim will denuclearize and hopes it will lead to the normalization of inter-Korean relations.

With the notable exceptions of Trump and Secretary of State Mike Pompeo, the vast majority of U.S. observers believe Kim will never denuclearize and is bluffing to receive relief from sanctions and gain additional time to complete his nuclear and ballistic missile programs. The U.S. view is derived from an increasing abundance of data points post-Singapore that seem to reveal Kim's true intent.

U.S. analysts often point out Pompeo's inability to meet with Kim on his last visit to North Korea, commercial satellite imagery suggesting improvements of infrastructure at the Yongbyon nuclear facility, the regime's recent shift in rhetoric (referring to the United States as having a “gangster-like” approach to negotiations), and North Korea's decision not to show up for a meeting with the United States on repatriation of the remains of fallen soldiers.

Although these are worthy reasons to be suspicious, and South Koreans themselves may privately share similar concerns, South Korean President Moon Jae-in's messaging to foreign partners—particularly the United States—appears to be consistent across his administration: this time may be different than past failures to engage the North. Moon has good reasons to be cautiously optimistic now and for strongly promoting his view. His optimism and approach will also hold significant implications for U.S.-South Korea alliance relations and North Korean denuclearization going forward.

During the trip, our South Korean interlocutors strenuously argued that this time is probably different because Kim has appeared sincere in his desire to finally denuclearize North Korea. They cited various bits of relatively persuasive evidence, such as his unilateral call for a self-imposed moratorium on intercontinental ballistic missile (ICBM) testing, detonation of the entrance to the Punggye-ri nuclear test site, his appreciation of the need for U.S.-South Korea military drills to continue, and other recent confidence-building measures such as joint sporting and family reunification events.

Furthermore, the Moon administration has been forward-leaning in spreading its cautiously optimistic narrative. A major reason for this is Moon's belief that the normalization of inter-Korean relations will be his legacy issue, according to non-government interlocutors who could speak more frankly. So he is pushing to do as much as possible to engage the North, regardless of whether it ultimately chooses denuclearization.

According to a recent piece by Korea expert Jean H. Lee, the Moon administration is ramping up its interactions with Pyongyang in the area of joint sporting events and is planning to engage in joint railway construction. As this version of the narrative goes, missing such a potentially historic moment to normalize inter-Korean relations is unacceptable, even if, in the end, Seoul gets nothing. So it's worth taking the gamble.

Moon's strategy is bolstered by the enormous political capital he can expend. Indeed, Moon's poll numbers are the envy of democratically-elected leaders. He has at least a 75 percent approval rating, and it might be even higher given that Moon's Democratic Party of Korea added 14 of 17 major provincial governorships and mayoral seats last month. Not to mention that his conservative opposition is in complete disarray following the impeachment and imprisonment of their president and Moon's predecessor, Park Geun-hye. These developments have given Moon a freer hand to take what would, under normal circumstances, be considered significant and even reckless political risks on North Korea.

Moon's “cautious optimism” narrative and his confidence in promoting it presents opportunities and challenges. On North Korea, the Moon administration has certainly taken the most encouraging and welcoming posture possible to entice the Kim regime to begin denuclearization. If this is in fact Kim's Gorbachev moment, South Korea will be ready to assist in the transition. However, the Moon administration's reading of the tea leaves is probably overly optimistic as the credibility of many of the Kim regime's “concessions” are debatable at best.

Blowing up the entrance to the Punggye-ri nuclear test site, for instance, is hardly proof that the site has been destroyed beyond repair. Kim's comfort with U.S.-South Korea military drills was subsequently contradicted by North Korea complaining about U.S. bomber flights. His self-imposed moratorium on ICBMs does nothing to prevent him from continuing to produce nuclear weapons and conducting tests on shorter-range delivery systems. And then there is Pyongyang's change in behavior since the summit that U.S. analysts have zeroed in on, which Moon tries to explain away or ignore.

Moon's approach also holds pros and cons for U.S.-South Korea alliance relations. Having Moon so focused on inter-Korean normalization while in such a strong domestic position enables him to experiment in ways that were unavailable to previous South Korean leaders. In just a few short months, Moon has built a rapport with Kim over two summits and probably has a more complete picture of North Korea than any of his predecessors. This information is regularly shared with the Trump administration to constantly tailor U.S. denuclearization strategy.

Nevertheless, Moon's quest for inter-Korean normalization as a legacy issue might eventually convince him of the need to push ahead without denuclearization if Kim balks. Even though South Korean government interlocutors forcefully denied such a possibility, emphasizing, for example, that all joint infrastructure and investment projects remained on ice until the regime showed tangible steps on denuclearization, non-government contacts were not as confident Moon would remain in lock-step with the Trump administration forever.

Looking ahead, it will be important for the Moon administration to continue welcoming negotiations on North Korean denuclearization in the interest of world peace. This probably should not change unless North Korea conducts new nuclear or ballistic missile tests or otherwise becomes belligerent. Assuming North Korea exhibits good behavior but does not denuclearize in the coming weeks and months (a good possibility), then Moon will probably feel rising pressure to keep the momentum going. Long timelines for denuclearization on the order of a decade or longer only add to the pressure on Moon to get something done now on normalization.

Alternatively, the Trump administration may become frustrated with North Korean delays and return to the policy of maximum pressure, shattering Moon's legacy. Or it may simply decide to live with a nuclear-armed North Korea, boosting Moon's hopes for peace. Regardless of the outcome, disagreement and anger between fellow alliance members could have catastrophic effects on trust and play right into Kim's end game of splitting the U.S.-South Korea alliance.

This is especially true in the current environment in which the Trump administration has challenged the traditional post-Cold War alliance order—notably in the case of NATO, but also through reports the United States might withdraw troops from South Korea due to cost. If Seoul and Washington want to stay the course, they should continue to strive for transparent and routine discussions about the future of the peninsula to avoid any misunderstandings.

Derek Grossman is a Pacific Council member and a senior defense analyst at the nonprofit, nonpartisan RAND Corporation. He formerly served as the daily intelligence briefer to the Assistant Secretary of Defense for Asian and Pacific Security Affairs at the Pentagon.

This commentary originally appeared on Pacific Council on International Policy on July 23, 2018. Commentary gives RAND researchers a platform to convey insights based on their professional expertise and often on their peer-reviewed research and analysis.