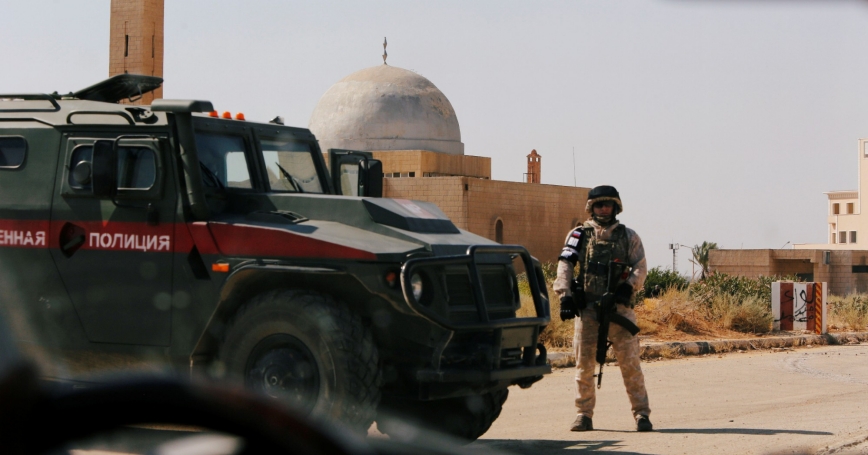 A Russian soldier near the Nasib border crossing with Jordan in Deraa, Syria, July 7, 2018

When Presidents Vladimir Putin and Donald Trump meet next Monday in Helsinki, Russia's wars in Syria and eastern Ukraine will likely weigh heavily on the summit. But unless Moscow agrees to withdraw its forces, and there's been no sign of this for now, the discussion may do little to bring peace.

Trump might foster eventual political solutions by underlining to Putin that the West will persist in imposing costs on Russia, particularly its economy, for current and any future malign interventions.

Understanding parallels in the two conflicts may shed some light on how potential political solutions might someday be reached.

First, Moscow intervened when allies were reeling and won military gains. In 2014, in Ukraine after a notably corrupt pro-Russian leader fled a popular uprising on Maidan Square in Kyiv, Moscow engineered a bloodless takeover of Crimea and deployed mercenaries to eastern Ukraine where they seized much of the Luhansk and Donbas regions.

The next year, as Syrian and allied Iranian and Hezbollah troops were losing ground to anti-Assad rebels and militant jihadists, Russia dispatched a modest force, mostly aviation, helping the regime to recover much lost territory.

Second, the West has mounted significant, if restrained, resistance. Responding to aggression in Ukraine, the West imposed unprecedented sanctions on Russia, provided (mostly non-lethal) military equipment to Ukraine, and — as NATO — began rotating forces into its eastern flank.

Regarding Syria, the U.S. and its allies have primarily targeted the Islamic State and its fighters, going to great lengths to avoid direct confrontation with Russia and its forces, although reports suggest that American forces killed several hundred Russian mercenaries earlier this year in eastern Syria.

Third, although Trump has cast doubt on Western policies of resistance, they have momentum. Last month, Trump may have told the Group of Seven that Crimea was Russian because everyone there spoke the Russian language, yet he escalated military aid to Ukraine to include advanced Javelin anti-armor missile systems.

In May, the European Union renewed sanctions on Russia even as Italy's new populist prime minister called for ending the ban on financing of Russian firms by the European Bank for Reconstruction and Development.

As for Syria, American ambivalence on how to deal with the Assad regime may soon reach a breaking point as it continues to press its gains in southwest Syria. A recent offensive has sent nearly 300,000 refugees streaming toward the border with Jordan and the Israeli-occupied Golan Heights.

With the Islamic State's caliphate in tatters, the United States faces a difficult decision about whether to begin winnowing its already modest force posture in earnest or keep troops in Syria in an effort to provide Washington with leverage in future negotiations.

Fourth, Moscow has the capacity to extend its interventions indefinitely. Fewer than 10,000 Russian regular combat troops — less than 3 percent of the total — are in eastern Ukraine. In Syria, some 4,500 Russian military personnel may be present along with dozens of combat aircraft.

Moscow has the capacity to extend its interventions indefinitely.

Despite a weak economy and recent drop in military spending, Russia can sustain these limited contingents. It is also learning from testing new weapons in combat conditions.

Fifth, absent peace accords, Russia's wars may yield only instability. In Ukraine, peace is possible only if the Russians withdraw, but the Kremlin persists even though the war is not popular at home.

Unless Russia decides to pull out, the multilateral Normandy peace process may remain stillborn and Russia's ties with the West will remain strained.

In Syria, the U.N.-led peace process has stalled and Assad and his backers will likely reclaim a majority of the country while declaring victory against the rebels.

The net result could be increased access for both Moscow and Tehran, even as the Trump administration appears to have become obsessed with minimizing Iranian gains in Syria in exchange for concessions elsewhere.

Alleged “humanitarian convoys” from Russia unload at closed military facilities and Organization for Security and Cooperation in Europe monitors are not allowed to inspect them.

As for Syria, a senior Russian diplomat recently had the temerity to claim the EU will “bear responsibility” if it fails soon to launch a reconstruction effort costing “dozens of billions” of dollars. This is impossible while fighting rages and Syrian and allied forces control security on the ground.

Trump could offer to work with Putin in the search for peace in Syria and Ukraine if Moscow were to decide to withdraw its forces.

At the summit, Trump could underline the West's — and his personal — opposition to Russia's interventions. This might help disabuse Putin of a notion fashionable among some in Moscow that Trump is weak or malleable.

At the same time, Trump could offer to work with Putin in the search for peace in Syria and Ukraine if Moscow were to decide to withdraw its forces.

Trump might point out that Russia and its allies are too weak on their own to bring about a stable peace in Syria. If Russia wants this, it could begin working with other great powers in the U.N.-led peace process to pursue a broad-based political solution and help managing post-conflict reconstruction.

Otherwise, Trump could add, Syria may remain at war, leaving Russian forces mired in a stalemate and permanently open to attack from anti-Assad rebels in Syria and perhaps vulnerable to violent Sunni terrorists on Russian soil.

Colin P. Clarke is a political scientist at the nonprofit, nonpartisan RAND Corporation and a non-resident senior fellow in the program on national security at the Foreign Policy Research Institute (FPRI). William Courtney is an adjunct senior fellow at the RAND Corporation, and was U.S. ambassador to Kazakhstan, Georgia and a U.S.-Soviet commission to implement the Threshold Test Ban Treaty.

This commentary originally appeared on The Hill on July 10, 2018. Commentary gives RAND researchers a platform to convey insights based on their professional expertise and often on their peer-reviewed research and analysis.