The Rules of the Game: Reducing Antisocial Behaviour and Violence at Football Events 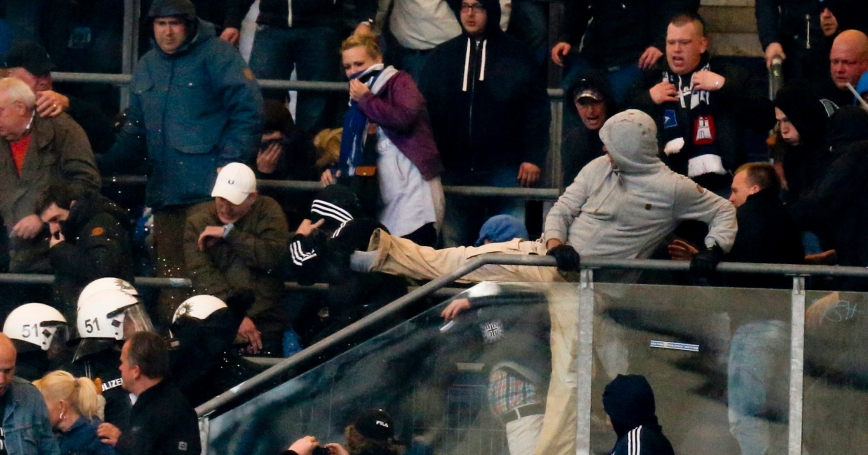 German riot police enter the Hamburg SV supporters' block during a soccer match against Bayern Munich in Hamburg, Germany, May 3, 2014

With France newly crowned as the latest football World Cup champion, the world is turning to the next competition, scheduled for Qatar in 2022.

Some attention is likely to focus on the potential for antisocial and violent behaviour at the event, since similar speculation preceded this year's tournament.

Violent behaviour at football matches has garnered international media attention for decades even though the vast majority of matches pass without any significant violent incidents.

Despite the widespread attention these harmful behaviours receive, there is limited evidence as to the effectiveness of current practices targeting negative fan behaviour.

More needs to be understood about the causes of football violence and how it can be effectively prevented at future international matches and tournaments.

Two new reports by RAND Europe on behalf of Qatar University explore the kinds of negative behaviours witnessed at football matches, the factors associated with such behaviour, and the approaches taken to prevent and respond to them.

Antisocial and violent behaviour displayed by fans can encompass a range of acts, such as verbal abuse, destruction of property, and acts of vandalism and assault.

The reports suggest that no single factor is responsible for violent or antisocial behaviour by fans at football events. Instead, multiple factors are often in play simultaneously.

Our research finds that alcohol may contribute to negative behaviour. Psychological factors, such as rushes of adrenaline and a sense of identity gained through these behaviours become relevant.

Other factors may include sporting rivalries, which have been shown to increase aggression in fans; sociopolitical elements like unemployment; the day of the week on which the match is held or the match venue and crowd size; how fans congregate in public spaces; and reaction to play, such as a team's performance on the pitch.

The evidence around strategies to reduce violence and antisocial behaviour is patchy and not systematic. Nonetheless, our research suggests that a variety of approaches have an impact.

Low-profile policing approaches aimed at establishing dialogue with fans have been credited with effectively reducing disorder. Such policing focuses on deconflicting situations, using softer skills (such as communication) and encouraging football fans to view the police as approachable.

Security cameras at the venue can serve as a deterrent and allow for better monitoring of antisocial behaviour, which facilitates better stewarding and targeted intervention. Mandatory transport for away fans can help keep competing fans separate and ensure timely and supervised departure of visiting fans. Early kick-off times help reduce antisocial behaviour in some contexts.

There is more mixed evidence around 'banning orders,' or prohibitions on stadium entry and match-day travel by so-called 'high-risk' supporters. The same goes for the use of mounted police at football venues.

Previous RAND Europe research highlighted the overall benefits of mounted police, though some studies imply that the use of mounted police in football settings is associated with violence and can raise tensions between fans and police.

Finally, a range of commonly used interventions appears to be ineffective. These include registration as a precondition for purchasing event tickets and policies geared toward specific factors often associated with antisocial behaviour related to drinking alcohol—banning alcohol sales within stadiums, by fans travelling to the stadium, and citywide during matches.

The evidence for what drives fan behaviour and what works to prevent violence at sports is still emerging. Further research is necessary to establish what strategies work the best. One challenge to future research is identifying the effect of individual interventions when they have been implemented as part of a whole package of measures.

More analysis is also needed of the factors driving violent and antisocial behaviour, including using comparison groups to gain insight into how behaviour may differ in different circumstances.

Using the best available evidence, our research implies that consensual policing, crowd control and specific match-day management approaches tend to be most effective in reducing antisocial behaviour at football events. The evidence around other commonly used interventions is either mixed or poor.

This commentary originally appeared on Policing Insight on August 14, 2018. Commentary gives RAND researchers a platform to convey insights based on their professional expertise and often on their peer-reviewed research and analysis.