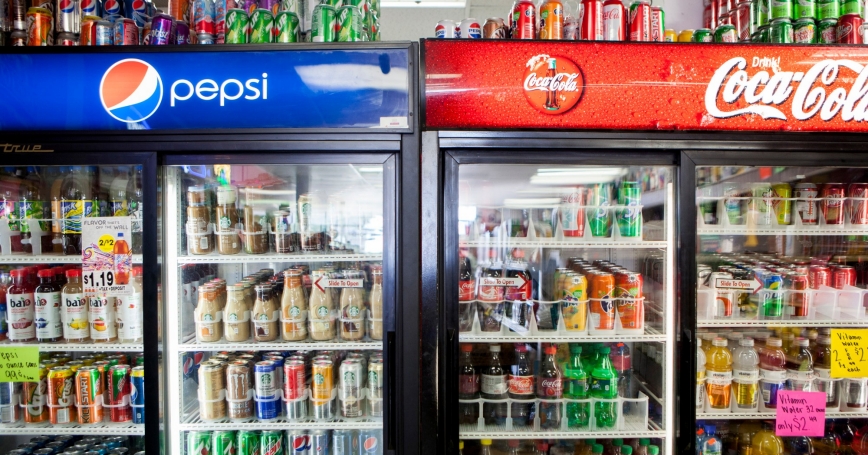 Cans of soda are displayed in a case at Kwik Stops Liquor in San Diego, California, February 13, 2014

The beverage industry derailed the movement for soda taxes in California by convincing state elected officials to pre-empt local taxing authority in exchange for cancelling a ballot initiative that would have made all new taxes difficult to pass. But taxes are not the only way to reduce sugary beverage consumption in California or the U.S. as a whole.

The beverage industry has come up with several ideas on how to get Americans to reduce their consumption of sugary drinks. They even pledged to help with this by launching a 10-year campaign called the Balance Calories Initiative with the goal of reducing beverage calories by 20 percent per person by 2025.

Their plans include using promotional efforts such as product placement, featured merchandising, couponing and other incentives in grocery stores and supermarkets. To protect their bottom line, their ideas center around shifting purchases to low- and no-calorie beverages and bottled water. They plan to showcase these products by featuring them in the coolers at cash registers and end-aisle displays and offering mini-cans and new low- and no-calorie products in special displays. If implemented aggressively, while reducing the current strategies promoting sugary beverages, these ideas could have an impact on medical conditions that are exacerbated by sugar, like diabetes and cardiovascular disease.

The beverage industry knows that in-store marketing is critical, so the attention paid to point-of-sale schemes has grown over the past few decades (PDF), while the relative investment in advertising outside the store has declined. As a consequence, manufacturers are paying retailers for shelf space, so their products can be displayed in the most favorable locations.

Where merchandise is placed and promoted in stores is the most important predictor of what people buy. Sales are directly related to how prominently something is showcased and the number of locations in which the product is displayed. One study of beverage sales found that placing sodas on an end-aisle display generated sales equivalent to discounting the beverage by 22 percent to 62 percent of the price per volume. The checkout aisle is another prime location associated with impulse purchases, making the cost of cash register real estate the most expensive in a store.

To determine how serious the beverage industry is about nudging consumers to shift away from sugary beverages, my colleagues and I documented how beverages were marketed in 69 supermarkets and convenience stores in three low-income communities that were being targeted by the Balance Calories Initiative: East Los Angeles where it was launched in 2015, and Montgomery, Alabama, and the North Mississippi Delta where it was launched in 2016.

We counted all the aisles, the end aisle displays, the special floor displays, the cash register displays and the displays around the store's perimeter and documented whether each of these locations displayed the three companies' sugary beverages brands. We found that of an average of 92 independent locations in supermarkets, sugary beverages were in 25 separate locations vs. 15 for low/no-calorie beverages and 11 for water. Sugary beverages were in 67 percent of all cash register displays. Moreover, the per volume price was, on average, three times higher for the smaller portion mini-cans than the 2 liter bottles [$2.95 for six 7.5 oz cans (45 oz) vs $1.51 for 67.6 oz], incentivizing the purchase of larger quantities.

We assessed the stores in Alabama and Mississippi in 2016, right before and in the first two months of the initiative while we assessed the East Los Angeles stores in 2017 two years after the launch. The stores in East L.A. were no different than in Alabama and Mississippi, and store managers told us they had no communications with the beverage manufacturers about changing the displays of the sugary beverages. The beverage industry claims they want consumers to shift to less caloric products, but on the ground, they are still promoting sugary beverages more aggressively than healthier substitutes.

Apparently, the beverage industry hasn't yet gotten around to applying their knowledge of effective merchandising to promoting health, but there's no reason why local jurisdictions can't support the stated intent of the Balance Calories Initiative to mitigate the harmful impact of in-store marketing strategies. Local rules and regulations could be passed to limit the sales of sugary beverages in the store to a single location, and remove them from salient locations like the cash registers and ends of aisles, so people are less likely to be nudged to make an impulse buy.

Similar regulations already exist to govern the sales of health-impacting products like tobacco and alcohol. Tobacco is restricted to an area behind a counter requiring a clerk to get the products. Outlets need a special license to sell alcohol, and it can't be displayed near the door or the cash register in a gas station convenience store.

If food retail outlets restricted sugary beverages and junk foods to a single non-salient area in the store, people who really wanted to buy them could, but would have to intentionally seek them out. Others might be less likely to buy a sweetened drink on impulse.

Given the beverage industry's reluctance to regulate itself as it promises to do, if localities have concerns, they may find that they have to force the issue.

Deborah Cohen is a senior physician policy researcher at the RAND Corporation, and the author of A Big Fat Crisis: The Hidden Influences Behind the Obesity Epidemic — and How We Can End It.

This commentary originally appeared on KevinMD.com on September 29, 2018. Commentary gives RAND researchers a platform to convey insights based on their professional expertise and often on their peer-reviewed research and analysis.