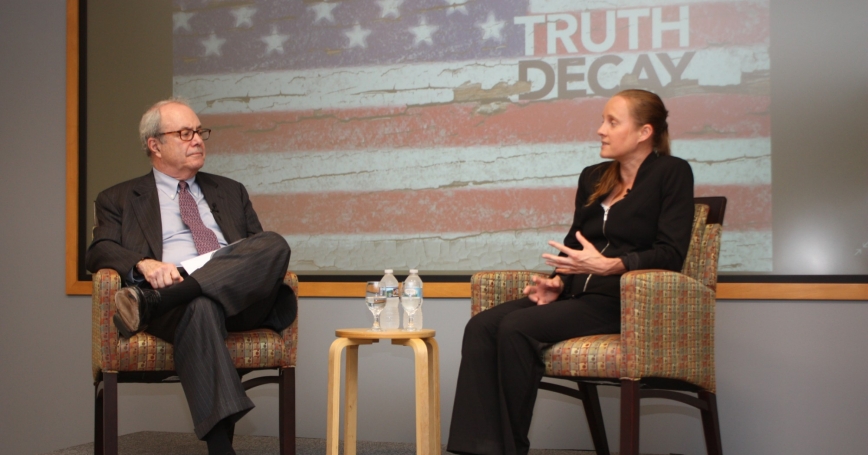 “Everyone is entitled to his own opinion, but not to his own facts.” That sentiment, once expressed by Sen. Daniel Patrick Moynihan, seems to be falling out of fashion in America's current civil discourse. Michael D. Rich, president and CEO of the RAND Corporation, has dubbed this phenomenon “Truth Decay,” and it is the subject of ongoing research designed to explore what is eroding the public's trust in facts and institutions—and how to stop the trend.

As part of the Conversations at RAND series designed to highlight important and timely research, a discussion on “Truth Decay and Community Engagement” brought together Jennifer Kavanagh, a RAND political scientist, and William “Pat” Getty, an engineer, September 20, at RAND's Pittsburgh office. Kavanagh and Rich are authors of Truth Decay: An Initial Exploration of the Diminishing Role of Facts and Analysis in American Public Life.

Kavanagh broke down the problem of Truth Decay into four disturbing trends:

She also highlighted three previous periods of Truth Decay in U.S. history—the Gilded Age of the 1880s and 1890s, the Roaring Twenties through the 1930s, and the Vietnam era of the late 1960s and early 1970s. They were all periods where the country experienced rapid changes in the ways information was disseminated and consumed—the rise of newspapers in the 1890s, radio in the 1930s, and television in the 1960s.

What's new this time around is the “increasing disagreement about objective facts,” said Kavanagh, who is also an associate program director at RAND.

Without agreeing on a shared set of facts, it is hard to have a meaningful debate about how to solve problems or work toward goals, she said.

“We see the same thing in, for example, immigration,” Kavanagh explained. “Because there are these two very different ways of looking at the world, and two separate sets of facts, the debate…has to be about ‘what are the facts?'” instead of how can we prioritize and achieve key policy objectives. “But, we have data that we could use to inform this conversation.”

Being “unable to agree on a common foundation” means there is no “starting point for the discussion,” she said.

Getty, the retiring president of the Pittsburgh-based Claude Worthington Benedum Foundation, spoke about witnessing the inability of homogeneous groups to see beyond bias. For example, he saw firsthand how opponents of shale gas extraction were unable to put themselves in the shoes of residents of depressed former industrial towns that have lost their economic engine and are desperate for jobs.

To escape or burn off the Truth Decay “fog,” there must be “a realization that facts matter, that data matters when you're dealing with policymaking,” Kavanagh said.

“One of the reasons that the Great Depression was so bad, and so long, was that at the beginning, economists and policymakers ignored macroeconomic data that would have allowed them to make different decisions that would have ended it sooner,” she said.

Other approaches to dealing with Truth Decay include rebuilding trust and fostering media literacy, but discovering the best approaches to those endeavors will require much more research, she said.

“How do you rebuild trust?” Kavanagh asked. “You have to know why people don't trust the institution in the first place.” As for media literacy programs, “There isn't even agreement on what the metrics we should be studying are.…It's not a course that you teach once a week. It's a way of thinking.”

In the past, periods similar to Truth Decay have sometimes ended with a crisis, but research might help the country avoid that this time. “Are there dynamics that we can harness or leverage, to help motivate change now?” Kavanagh answered her own question with the admission that there is no quick fix, but steps can be taken.

“Can we do small things that help get the ball rolling? Because there's an element in each of these previous periods that is top-down, that is some kind of crisis or event, but there's also an element that's bottom-up…It happened because journalists were going out there trying to get the facts. It happened because consumers wanted facts and they started demanding them.”

Meanwhile, “the goal here is really to work toward solutions but to do it in a RAND way.” And not just at RAND. Kavanagh views her initial Truth Decay research as a call to arms to the wider research community.

“RAND isn't going to do all that whole research agenda in Chapter Six unless I'm going to work till I'm…150,” she said. “We need other people to be involved.”