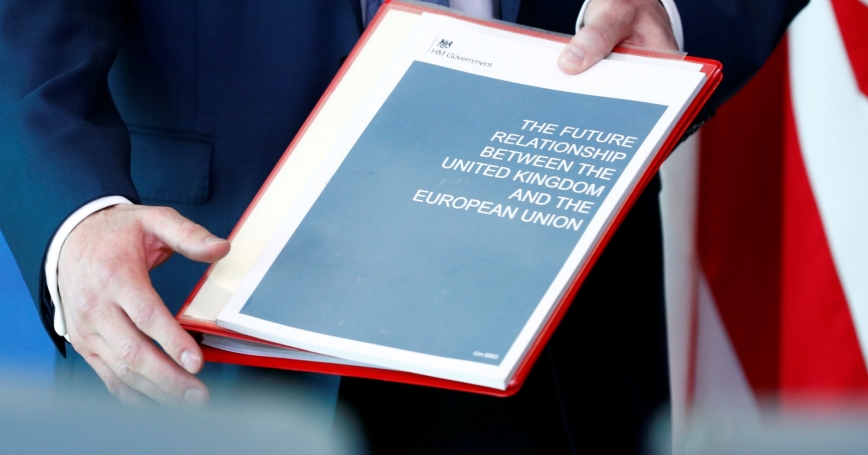 Britain's Secretary of State for Exiting the European Union, Dominic Raab, holds documents ahead of a meeting in Brussels, Belgium, July 19, 2018

It is now more than two years since Britons voted to leave the EU. But what has been learned in that time about what British people want for their future relationship with the EU? Those on the hard right argue that Britons voted to sever existing treaties with the EU. Others argue that leaving the single market was never part of the plan. The referendum outcome tells us very little about what people actually wanted.

But our study (PDF) of what people value about the EU does tell us. And we find that their priorities map most squarely onto a Norway-style model for future relations with the EU.

People place a high value on having access to the EU markets for trade in goods and services. They like the option for the UK to be able to make its own trade deals. They also value that the UK is able to make its own laws, but not as much as access to the single market or the ability to make trade deals. They worry about freedom of movement, but mostly because of concerns about demand for public services. They strongly dislike the idea of having to get a visa to travel for their holidays.

Netting out positives and negatives, we found that Britons place the most value on a Norway-like deal. In fact, support for this kind of deal—which is based on membership of the European Economic Area (EEA)—has increased in the past year, up from 38% in 2017 to 43% in 2018. Norway is part of the EEA but is not a member of the customs union and can therefore make its own trade deals. We found people value the Norway model more than the current relationship with the EU, in part because Norway is free to make trade deals with non-EU countries. And while a “no-deal” is less popular than remaining, it is considered preferable to a customs union arrangement.

These findings have their roots in a 2017 study (PDF) we undertook to better understand what people thought about Britain's relationship with the EU. The study incorporated a survey with nearly 1,000 respondents using a “stated preference discrete choice experiment”. The idea is that it is better to ascertain people's preferences by examining the choices they make rather than asking them to try to estimate the value that they attach to things directly, because people are much better at making choices—something they probably do every day—than providing abstract valuations. Also, using choices forces people to make trade-offs, which helps identify what is most important to them.

Respondents were asked to make choices between options that described the UK's relationship with the EU. These options included freedom of movement for holidays and working, access to the single market, ability to make free trade deals, contribution to the EU and sovereignty.

Now, more than a year on and as negotiations continue between the UK government and the EU, we decided to revisit this study to see whether people's priorities have changed. We approached the same people that we surveyed in February 2017 to repeat the experiments, managing to repeat the survey with more than 80% of them. We also added new respondents so we again had a sample of nearly 1,000 respondents. Our study revealed that people's priorities had changed little over the past year, which is somewhat surprising given the rhetoric about Brexit during that time.

The status quo, or remaining in the EU, was the second preferred option—further evidence that people valued access to the single market and were willing to trade restraints on freedom of movement and sovereignty for this access.

The third preferred outcome was a “no-deal” Brexit, relying on World Trade Organisation rules. This was valued less positively than remaining in the EU because of the need for visas for holiday travel and lack of access to the single market, although there are some positive aspects in terms of being able to make free trade deals with countries outside of the EU, increased sovereignty and savings made by ending EU contributions.

Of all the relationships we examined, participating in the customs union was valued the least. It was considered worse than not getting a deal because of restrictions on making free trade deals, even though the costs that businesses would face to participate in the single market for trading of goods are not as high as for the “no deal” situation. It was considered worse than remaining in the EU because of the need for visas (and health insurance) for travel and loss of access to the EU market for services and increased costs for goods. These aspects were not outweighed by the positive benefits of constraining freedom of movement for working and living (requiring work permits for people working in the UK), increased sovereignty and savings.

Will of the People?

It's very difficult to quantify the value of what the UK government is proposing as its Brexit model in the Chequers plan because it is relatively ambiguous. We have therefore calculated values for the most optimistic and pessimistic interpretations.

In the most optimistic view, a certain number of “ifs” would value the Chequers plan as highly as the EEA (Norway) option. This would be the case if it allows a reciprocal deal for truly visa-free travel for tourists, including continued reciprocal health insurance arrangements; if the UK is able to make trade deals with countries outside the EU on its own terms and is not constrained by the “common rule book”; and if the UK is able to sell goods with no additional costs. However, at the other extreme, if these conditions are not met then Chequers is valued much more negatively than a customs union arrangement.

Politicians who were keen to follow the “will of the people” have been curiously silent on what is the most popular option among the British population—the Norway-type deal. More attention could be given to accessing the single market, rather than focusing on stemming the freedom of movement of people and increasing sovereignty.

Charlene Rohr is a senior research leader at RAND Europe. David Howarth is a professor of law and public policy at University of Cambridge. Jonathan Grant is vice president/vice principal (service) at King's College London.

This commentary originally appeared on The Conversation on October 11, 2018. Commentary gives RAND researchers a platform to convey insights based on their professional expertise and often on their peer-reviewed research and analysis.