And, By the Way, They Were All Women: RAND Hosts Forum on 21st-Century Warfare Honoring Roberta Wohlstetter 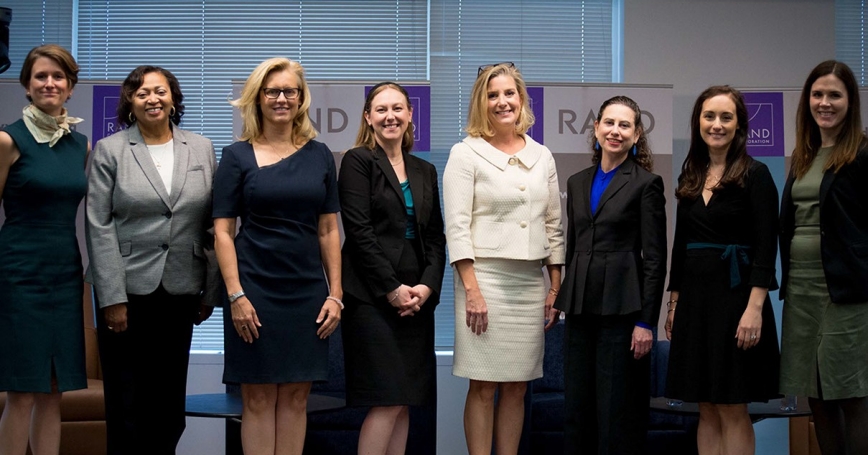 There was a surprise in store for attendees at the conference on October 24 that attracted more than 100 national security experts, flag officers, and decisionmakers to RAND's Washington office: The featured speakers, moderators, organizers, donor, and namesake for the event were all women.

“We didn't hide their names or the fact that they were all women. We just didn't highlight it in the invitation—because this wasn't a 'women's conference,'” said Caroline Baxter, senior policy analyst and co-organizer of the event.

The event, called the “Roberta Wohlstetter Forum on National Security: Gamechangers in 21st-Century Warfare,” was named in honor of a pioneering RAND researcher, the late Roberta Wohlstetter, best known for her groundbreaking study of why the United States failed to anticipate the attack on Pearl Harbor. The half-day forum was made possible by a RAND donor who wanted to promote the work of female policy researchers at RAND. The event was organized by Melissa Rowe, Vice President Global Research Talent, along with Baxter and information scientist Elizabeth Bodine-Baron who are codirectors of the D.C. chapter of the RAND Women in Defense Network, and Khorshied Samad from the Office of Media Relations. The organizers aimed to honor Roberta Wohlstetter by providing a forum for vigorous discussion of national security gamechangers, informed by a multidiscipinary group of female experts from RAND and sister organizations. Unlike in Roberta's day when few women were represented on the staff of major think tanks, 44 percent of RAND's current research staff are women.

The first panel, on “Fighting a Disinformation War,” featured Jennifer Kavanagh and Bodine-Baron from RAND and Susan Hennessey of the Brookings Institution, with CNN's Elise Labott moderating. Much of the discussion focused on the difficulty of forming policy responses to state-sponsored misinformation and disinformation. Bodine-Baron noted that purveyors of such false information include Russian state agencies and their proxies, but also U.S. citizens, including media figures, who spread messages that align with Russian state views because they agree with them. “It's a thorny issue if you have an American citizen pushing Russian propaganda… especially if it's based on false information,” Bodine-Baron said. Hennessey agreed that U.S. law does not offer immediate answers and added, “technology has allowed people to warp the marketplace of ideas and we are not able to respond.”

The second panel, on “Technology as a Battlefield Gamechanger,” featured Cortney Weinbaum and Stacie Pettyjohn of RAND and Elsa Kania of the Center for a New American Security, moderated by Sylvie Lanteaume of Agence France-Presse. Weinbaum and Pettyjohn noted that while in the past, government drove technological innovation through defense contracting, today the private sector drives innovation with products that are then adapted to defense use—sometimes creating security vulnerabilities.

The third session, on “The Uncertain Future of Warfare,” featuring Lara Schmidt and Yuna Wong from RAND, along with Cherie Emerson of the Army's Strategic Analysis Division, was moderated by Nadia Bilbassy of Al Arabiya. Much of the discussion focused on wargaming. “As human as it is to want to know what is going to happen in the future, no tool, let alone wargaming, can show you,” Wong noted. “But it can identify your weaknesses.”

The event closed with a free-ranging conversation between Christine Wormuth, director of RAND's International Security and Defense Policy Center, and Kimberly Kagan, founder of the Institute for the Study of War. Kagan noted the vital role that research institutions play in supporting the national security bureaucracy “by helping it work through problems it will never be able to solve alone because it has to chase the real world around the soccer field.”

This blog post was updated on April 25, 2019 due to one minor correction.