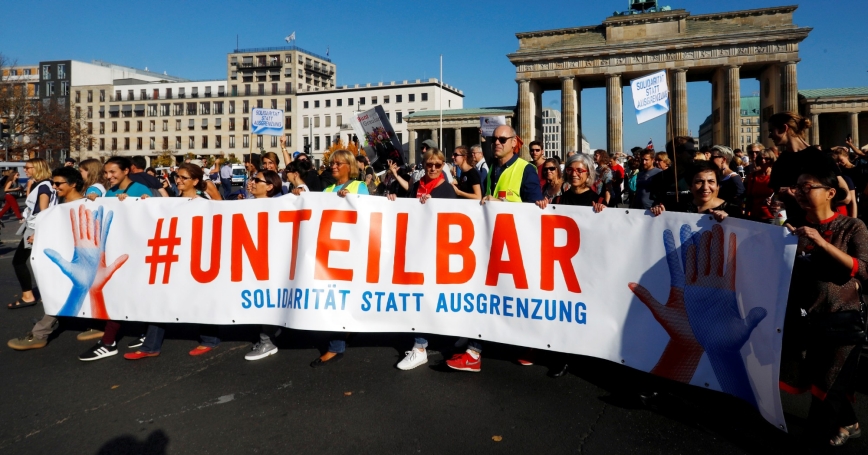 Protesters gather to the #unteilbar demonstration in Berlin, Germany, October 13, 2018

In October, tens of thousands of protestors gathered in Berlin to take part in a demonstration to support an “open and free” German society. Organizers planned the #unteilbar demonstration (#indivisible in English) in response to the rise of the anti-immigrant Alternative for Germany (AfD), which is now the largest opposition party to Chancellor Angela Merkel's governing coalition. The demonstration also follows far-right protests that took place in the eastern city of Chemnitz in August.

The #unteilbar demonstrations highlight a German society that has gone through changes since Merkel's “open door” policy drew 1.2 million migrants and refugees to Germany in 2015. The anxieties around the integration of these refugees have cost Merkel at home politically, with the AfD effectively pushing the narrative that Germany is losing its national identity to migration. The #unteilbar demonstration organizers have warned that “racism and discrimination are becoming socially acceptable.”

Overcoming the integration challenges associated with the 2015 migration crisis could also present Merkel with the opportunity to improve her reputation at home. Broadly speaking, access to employment for refugees and migrants is an important factor for successful integration. Merkel, therefore, could seek to develop policies and laws that focus on the socio-economic integration of refugees by addressing societal issues, like employment discrimination, head-on. The #unteilbar organizers also raised this possibility.

To ensure continued economic integration of newly arrived refugees, the German government adopted the Integration Act in August 2016, which provides for integration classes, vocational training, employment, and training opportunities. The law, however, does not address hurdles that refugees may encounter once they are integrated.

Educational achievement has not guaranteed a smooth transfer to gainful employment for immigrants in Germany. Studies indicate that ethnic minorities, including Turks (PDF), experience discrimination in the German labor market. Having a foreign name can also reduce the chance of getting a job interview. This happened to my own father, an international student from the Democratic Republic of Congo, in the late 1980s when he completed his Ph.D. in Germany.

Germany enacted the General Equal Treatment Act in 2006 to address employment discrimination based on categories like race and ethnic origin. The law, however, has gaps. The Federal Anti-Discrimination Agency, the body tasked with the implementation of the act, does not have the power to carry out its own investigations in discrimination proceedings, for example.

Everyday discrimination against ethnic minorities is still commonplace in Germany, and the Merkel government might address this through legal and policy tools that adequately address the barrier that employment discrimination could present to the successful integration of refugees. Germany could look to the United States as an example of a fellow Western nation that has over fifty years of experience in successfully integrating non-European immigrants.

There is no denying that migration has become a source of anxiety among many citizens across the Atlantic, including Germany. Germany, like the United States, also has a legal tradition and a strong constitution that promotes equality for all those living within its borders. That same tradition could end up being a factor as German policymakers consider whether it is advantageous for the nation as a whole that the newest members of its society should have the necessary legal protections to succeed socially and economically. In fact, proponents might even argue that such steps could ensure that Germany, in the face of changing demographics, actually is #unteilbar.

Laura Kupe is a policy analyst at the RAND Corporation.

This commentary originally appeared on American Institute for Contemporary German Studies on October 18, 2018. Commentary gives RAND researchers a platform to convey insights based on their professional expertise and often on their peer-reviewed research and analysis.