Reflecting on the Past to Counter Future Terrorism 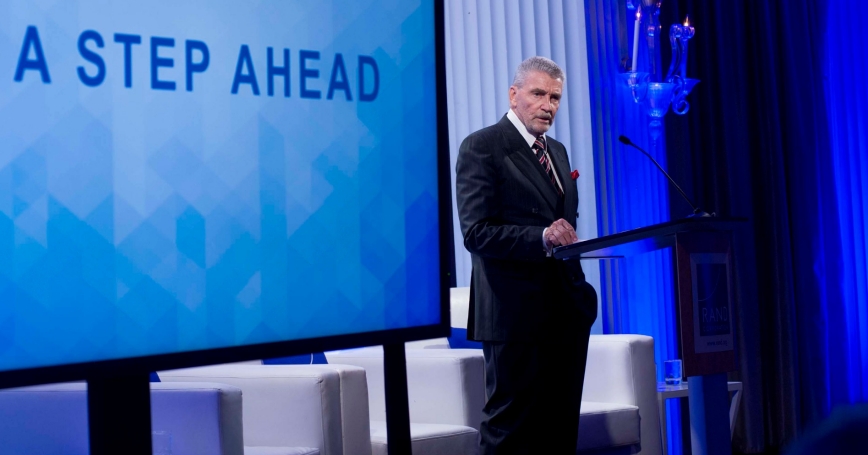 Brian Michael Jenkins at the One Night with RAND event in Santa Monica, November 8, 2018

Warfare in the future will increasingly be about manipulating perceptions, whether by hostile states or non-state actors, according to terrorism expert Brian Michael Jenkins. The creation of fear and anxiety by terrorists, and foreign meddling in U.S. politics, are components of contemporary conflict. A major challenge facing the U.S. is how to get better at countering foes while strengthening national institutions, and U.S. democracy depends on it, Jenkins said Nov. 8 at a RAND Corporation event in Santa Monica.

The event, One Night with RAND, brought together leaders in business, government, academia, and philanthropy to pay tribute to Jenkins and mark his 50-year affiliation with RAND and the substantial body of research on terrorism that he has produced.

The speakers described the evolution of terrorism and its effect on the direction of U.S. national security, specifically since 9/11, when terrorism was framed as an “existential threat.” As a result, terrorism became the country's highest national security priority and the country fell into a “security trap,” said Jack Riley, vice president and director of the RAND National Security Research Division. “In our rush to prevent future attacks, we tested the perilous slope upon which our criminal justice and national security systems are perched.”

Jenkins said that terrorism has not turned out to be the existential threat we feared in the shadow of 9/11, but continuing terror still threatens our democracy.

The 9/11 attacks fundamentally altered our perceptions of plausibility—after 9/11, no scenario, no matter how far-fetched, could be ruled out. The threat has transcended what we see happening to instead what we can imagine might happen, Jenkins said.

Neither border walls nor firewalls can protect a divided society that dismisses fact and submits to the tyranny of fear.

While a hyperfocus on counterterrorism enveloped much of the national security enterprise after 9/11, “tensions between the U.S. and adversaries such as Russia, China, Iran, and North Korea were also rising,” said Javed Ali, acting associate director of the RAND Cyber and Intelligence Policy Center. A new counterterrorism challenge emerged as well. ISIS, which expanded rapidly, had by 2015 “more people, money, and resources under its control than al-Qa'ida in its heyday,” he said.

ISIS is just one example of the staying power of terrorism, an “intergenerational fight,” said Christine Wormuth, director of the RAND International Security and Defense Policy Center. Elements needed for a sustainable counterterrorism strategy include working with allies and partners to address the root causes that lead people to radicalize and making sure there are no safe havens for terrorists to plot and plan attacks—in the real world and in the virtual world, she said.

“We have to find a way to continue the fight against terrorism in a way that does not sacrifice our values or take our eyes off the other important challenges that we face,” Wormuth said.

Continuing the fight against terrorism while preserving a balance between liberty and security has become more challenging as wars have become even more about perceptions. “Outcomes increasingly depend on whose story wins,” Jenkins said. “Meanwhile, it has become harder to tell what's real and what isn't.”

Recent RAND research has pointed to the rising polarization of national politics and the diminishing role of facts and analysis in American public life, Jenkins said. When combined with an atmosphere of terror, these developments make it harder to defend democracy against the hostile manipulation of our perceptions, he said.

“Neither border walls nor firewalls can protect a divided society that dismisses fact and submits to the tyranny of fear,” Jenkins said. “Our defense must come from all of us—all of us as Americans—not just the Departments of Defense or of Homeland Security. A nation united in its commitment to fundamental values—liberty, courage, self-reliance, sense of community, and mutual respect—cannot be sundered, cannot be conquered.”

“There will be much more to do in the next 50 years,” said Jenkins.