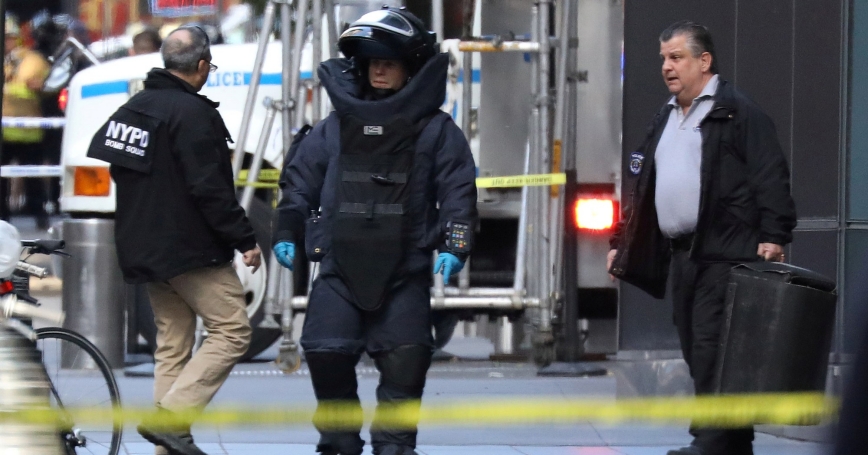 A member of the NYPD bomb squad walks outside the Time Warner Center in Manhattan after a suspicious package was found at CNN headquarters, New York City, October 24, 2018

The recent attempted bombings of Democratic figures and mass shootings in Pittsburgh, Jeffersontown, Ky., and Thousand Oaks, Calif., have stoked widespread fears of politically motivated violence. The reality, thankfully, is that, on the whole, America has been impressively non-violent. And there are steps that might be taken to reduce the threat of this kind of violence.

There were 7,175 hate crimes reported to the FBI in 2017, including nine homicides. This is about 30 percent more than the historic low in 2014, which is a good bit lower than the 2001 high of close to 10,000 and equals about one hate crime for every 40,000 Americans, so these are still fairly rare, Still, these numbers are of small comfort in the face of at least 14 mail bombs plus three active shooter incidents within a matter of days.

Let's look at the risk in more detail, using a model developed by RAND researchers that I used during research on potential terrorist threats. There are four major risk factors. The first is a potential shooter being motivated toward unrest or violence. This is the most common risk. Believing, for example, that other ethnic or religious groups are a threat to one's personal safety or the future of the country can be motivating, even if that belief is misguided.

The second is the potential shooter's belief that violence is legitimate. While there are norms in this country against political violence, there are those who may deem it acceptable to do whatever is necessary to defeat one's adversaries as a preemptive “defense” against those who pose real or imagined threats.

The third is capability and opportunity. Capability can include access to firearms and explosives, but it doesn't have to, as demonstrated by the motor vehicle attacks that have become far too common. Opportunities to attack large numbers of victims are everywhere, from shopping malls, to places of worship, to political gatherings, to public streets, and, as shown by the recent bombing attacks, selected political and media leaders.

The fourth is willingness to accept the personal costs to be violent. When attackers take up arms, or assemble bombs, they are probably aware that their actions will likely result in arrest at the very least and, quite possibly, death. Most people are not willing to do this. However, in the event of widespread social unrest in an area, willingness to participate can spread like a virus among members of a community.

So, while the risk of broader political violence is not massive, it is real. Let's look at approaches to combat these risk factors, systematically.

While the threat of political violence is real and growing, it is rare. And, more importantly, there are concrete things that can be done to reduce the risks.

A focus on suppressing motivation and legitimacy could be a worthy start. Here, there are signs that some potentially violent individuals are finding their fears and beliefs in the necessity of violence being validated by the words of political and media leaders. Polls show widespread concern that today's rhetoric could be motivating political violence. Solutions might include repeated statements from leaders that fear of people because of their ethnicity, religion, party, or social grouping is wrong and that violence against them is illegitimate and against American values. Leaders might also encourage authorities to hunt down those pursuing political violence, even—and especially—those nominally associated with their end of the political spectrum.

Next is suppressing capability and opportunity. This could mean watching out for and reporting those who might be preparing for violence in material ways such as researching how to kill as many as possible, getting guns or other weapons to prepare for a violent attack, or traveling overseas to get paramilitary training. It is through such sharp-eyed reporting that many terror plots have been foiled (PDF).

Other components of a solution might include efforts to suppress the willingness of attackers to accept personal costs. Attackers commonly believe they will be successful and will get attention for themselves and their cause. Catching plotters in advance is one way to change this calculation. Another could be to emphasize that would-be attackers will likely be met by swarming, incapacitating force, like that faced by some airplane hijackers and others. This is the “fight” part of the Department of Homeland Security's “Run, Hide, Fight (PDF)” maxim. Willingness might also be suppressed if attackers are denied attention for their cause, which could occur if media furthers the FBI-supported “Don't Name Them” and “No Notoriety” campaigns, which are aimed at discouraging media from publicizing attackers' identities, life stories, and manifestos.

So, while the threat of political violence is real and growing, it is rare. And, more importantly, there are concrete things that can be done to reduce the risks.

John S. Hollywood is a senior operations researcher at the nonprofit, nonpartisan RAND Corporation and a professor of policy analysis at Pardee RAND Graduate School.