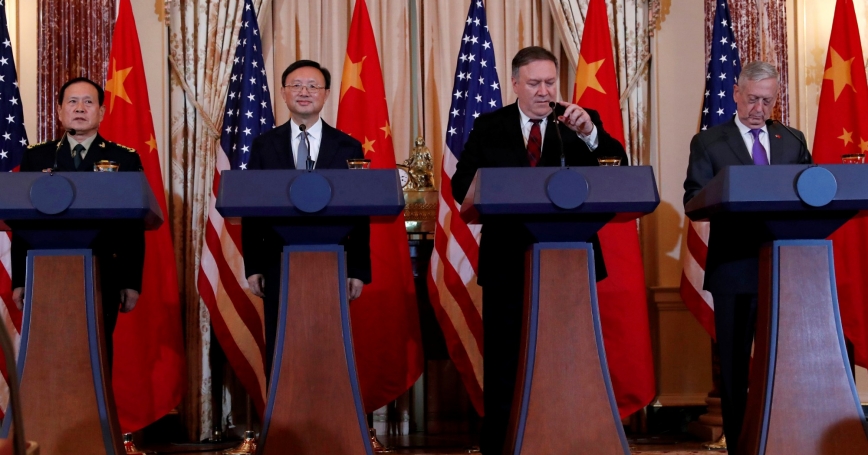 Dialogues between senior leaders of the United States and China have raised hopes that tensions over trade may ease. However, deep disagreements on an array of issues, exacerbated by political incentives to avoid compromise, raise a persistent risk of military crisis. Stepping up official communication, building mechanisms to manage crises, and dialing back antagonistic behavior could help minimize the risk of miscalculation and help stabilize ties.

Discussions in the lead up to the G-20 and an anticipated meeting of Presidents Donald Trump and Xi Jinping could hold promise to help reduce bilateral strains over trade. The talks follow a Nov. 9 meeting between Secretary of State Mike Pompeo and Secretary of Defense James Mattis and State Councilor Yang Jiechi and Minister of Defense Wei Fenghe, which similarly aimed to stabilize relations. As welcome as these moves are, however, the talks barely touch deep-seated differences over a growing array of issues.

Poking a persistent sore spot, U.S. bombers passed over the South China Sea in October, just days before Secretary of Defense Mattis met with his Chinese counterpart, Wei Fenghe, on the sidelines of the ASEAN Forum meeting held in Singapore. The meeting followed a stinging speech by Vice President Mike Pence on October 4 that warned of a tougher U.S. approach to China. In late September, the United States approved the sale of $300 million in military equipment to Taiwan, angering Beijing. China has signaled its displeasure with U.S. decisions with actions of its own. In September, Beijing recalled its top admiral from visiting the United States and canceled port calls by U.S. warships.

Disputes between the United States and China over a broader range of issues have compounded and aggravated the military tensions. Resentment over tariffs has grown in China, where many blame the United States for trying to contain their country's rise. Domestic politics has added new irritants as well. China's widespread crackdowns on Christian and Muslim believers has drawn broad condemnation from Congress and other U.S. officials. Meanwhile, U.S. criticisms of Chinese “influence operations” has spurred denunciations of “bias” in Chinese press. And despite incremental progress in trade talks, deep differences remain.

How did we get here? Both countries have strategic and political reasons for pursuing antagonistic policies. At the strategic level, competition between the two near-peers now entails some actions that advantage one side at the expense of the other. For example, China's determination to become a global technology superpower threatens America's standing as a lead economy. Tensions have intensified accordingly as the U.S. has clamped down on Chinese access to technology and both sides trade accusations. Similarly, Washington's determination to maintain access and influence in Asia—increasingly the center of the global economy—hampers China's plans to lead Eurasia's integration. Tensions have accelerated as the two sides attempt to undermine the credibility of the other as a regional leader. U.S. officials have denounced China's premier Belt and Road Initiative as “debt trap diplomacy” that impoverishes China's partners. Meanwhile, Beijing has bitterly criticized the U.S. vision of a “Free and Open Indo-Pacific” and advanced a security policy that calls for ending U.S. military alliances in the region.

Presidents Trump and Xi also face domestic and international political incentives to pursue antagonistic policies. In the United States, a deeply polarized political situation has elevated the imperative of mobilizing one's base of supporters while securing enough “centrist” or undecided votes to prevail in electoral contests. Emphasizing the threat posed by China could help the incumbent party appeal to undecided voters while rallying base voters. Internationally, criticism of Chinese misbehavior allows the United States to cultivate those countries suspicious of Chinese power.

In China, political tension over the anti-corruption purge, stalled reform, and the prospects of slowing growth have raised dissatisfaction with Xi's leadership. Sensitivity to such skepticism may motivate Xi to maintain a hardline stance in disputes with the United States and thereby avoid actions that might reinforce the politically lethal perception of ineffectiveness and failure. Similarly, China's aspiration to appear a leader of the developing world provides an incentive for Beijing to demonstrate its ability to prevail in any dispute with the United States and the West.

Given the depth and breadth of these interweaving drivers, neither Washington nor Beijing is likely to reverse the acrimony anytime soon. Both capitals thus face two dangers: First, the possibility of a crisis arising from miscalculation is increasing. As frustration, distrust, and resentment take root, both sides are likely to view any standoff situation in a zero-sum way. The struggle to gain the upper hand and avoid humiliating outcomes could lead to disastrous miscalculation, especially near hot spots like Taiwan and the South China Sea.

Second, the deepening antagonism also threatens to impair efforts to resolve crises swiftly and efficiently. Officials and commentators may find harsh criticism of the other side politically useful for mobilizing popular support. However, hardening views also undercut any motivation to compromise and reduce tensions in a crisis just when it is needed most. After all, if the other country cannot be trusted and its intentions are inherently dubious, why concede anything?

For now, the odds of escalation in the event of any crisis remain low. Both governments are deeply attuned to their respective public's demand for domestic priorities, and neither has a constituency for war. Reckless actions that might precipitate a military clash and severely damage already uncertain global economic prospects would almost certainly spur intense political opposition in both capitals and around the world.

But because the drivers of bilateral tensions are so deeply rooted, these trends are unlikely to be reversed soon. Washington and China could focus on ways of mitigating the possibility of military crisis while managing their differences. Dialogue between senior officials represents an important step towards stabilizing ties. Similarly, an agreement on guidelines to avoid incidents between military aircraft by the defense chiefs of the ASEAN Forum, including those from the United States and China, could help reduce the risk of miscalculation. But more can be done. Both sides could also strengthen communication mechanisms to manage crisis situations and dial back some of the antagonistic behavior. Taking actions to improve communication and reduce the risk of a crisis may seem exceedingly modest goals for two great powers, but they could be critical to ensuring U.S.-China relations remain steady in increasingly unsteady times.

This commentary originally appeared on Newsweek on November 20, 2018. Commentary gives RAND researchers a platform to convey insights based on their professional expertise and often on their peer-reviewed research and analysis.