Why North Korea Sanctions Relief Is Inappropriate at This Time 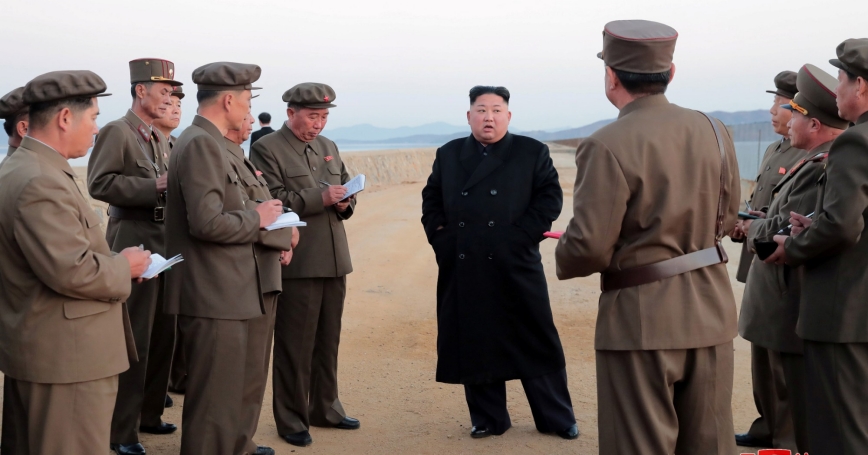 In April 2017, the Trump administration announced a “maximum pressure and engagement” strategy to induce North Korea to abandon its nuclear weapon program.

Almost a year later, North Korean leader Kim Jong Un told South Korean envoys that he was ready to negotiate abandoning the North's nuclear weapons with the United States as part of the peace offensive he had begun earlier in the year.

Of course, the North Korean government sought to save face by arguing that it had launched its “'peace offensive' from a position of strength, not as a 'result of sanctions and pressure.'”

But the North Korean regime's persistent demand for sanctions relief in recent months belies this explanation.

Since then, the North has vigorously pursued summit meetings and other displays of peace-seeking, leading South Korea, China, and Russia to talk about providing the North with sanction relief. They hope to induce the North into actual denuclearization.

But the DPRK's actions speak louder than its words. To understand this, it is first critical to define denuclearization. The U.S./Russian Strategic Arms Reduction Treaty agreements were focused on reducing the number of nuclear weapons and the number of delivery systems for those weapons. These measures were also key in assessing the severity of the nuclear threat the Soviet Union posed.

Reducing test facilities, as North Korea has done, is a sign of commitment, but it is not denuclearization.

The North's development of more powerful, miniaturized nuclear weapons may have increased its nuclear destructive power by perhaps 70 percent in 2018, despite North Korea's peaceful rhetoric.

North Korea has yet to relinquish a single nuclear weapon: Pyongyang appears to be nuclearizing, not denuclearizing.

Since the “maximum pressure and engagement” campaign induced North Korea to offer nuclear weapon abandonment in the first place, it seems illogical to reduce that pressure when the North is increasing its nuclear weapon threat.

North Korea claims it needs trust with the U.S. before any denuclearization, but history suggests that the North violates denuclearization commitments even when it has established trust.

After all, the North apparently had trust in South Korea when it signed the 1992 Denuclearization Declaration committing the North to having no nuclear weapons or nuclear weapon production facilities, yet the North was apparently in violation of that agreement even as it was signed and has been in increasing violation since then.

If Kim Jong Un is sincere, it's hard to understand why he would waste hundreds of millions of dollars on building new nuclear weapons that he has promised to relinquish in the next roughly two years.

If Kim Jong Un is sincere about abandoning his nuclear weapons, it is hard to understand why he would be wasting hundreds of millions of dollars on building new nuclear weapons that he has promised to relinquish in the next roughly two years.

A U.S. proposal to freeze North Korean nuclear weapon production would be a key test of whether the DPRK will denuclearize as promised.

A nuclear freeze could be achieved by having North Korea halt production at four key kinds of nuclear weapon production facilities (nuclear reactors, plutonium reprocessing, uranium enrichment, and nuclear weapon assembly), and monitoring the activities at these facilities.

There are probably only about 10 such facilities in North Korea. While the United States eventually wants a full disclosure of all North Korean nuclear weapon activity, a half page list of these facilities could facilitate a production halt by identifying the name of each facility, its location, its function, and its capacity.

The North has thus far refused to do this, fearing that such a list would make these facilities targets of a U.S. preemptive strike. The United States could address this issue by identifying known facilities before requesting the list, and arranging stoppage and monitoring by the International Atomic Energy Agency, France, Britain, and/or the United States at the known facilities.

North Korea could then disclose to China the location of the covert facilities, allowing Beijing to arrange the stoppage and monitoring at them.

But this would not yet be denuclearization—the number of North Korean nuclear weapons would not have been reduced.

To begin the reductions, a reference point for North Korean denuclearization could be established. Since Kim Jong Un offered to abandon his nuclear weapons on March 5, that date could be the reference point.

North Korea could surrender the likely five to eight weapons made since March 5, assuming it can make up to 12 weapons per year.

A French and/or British team could be established perhaps at Yongbyon to accept the surrendered weapons, and work with North Korean scientists to dismantle them.

After dismantlement, the critical nuclear materials would be removed from North Korea and the rest of the nuclear weapon assemblies destroyed.

Of course, a freeze is also required with the North Korean ballistic missile program, and verification arranged for all of these actions.

To make good on Kim Jong Un's commitment to full denuclearization during President Trump's first term in office, these efforts would have to proceed very soon.

This commentary originally appeared on NK News on November 23, 2018. Commentary gives RAND researchers a platform to convey insights based on their professional expertise and often on their peer-reviewed research and analysis.