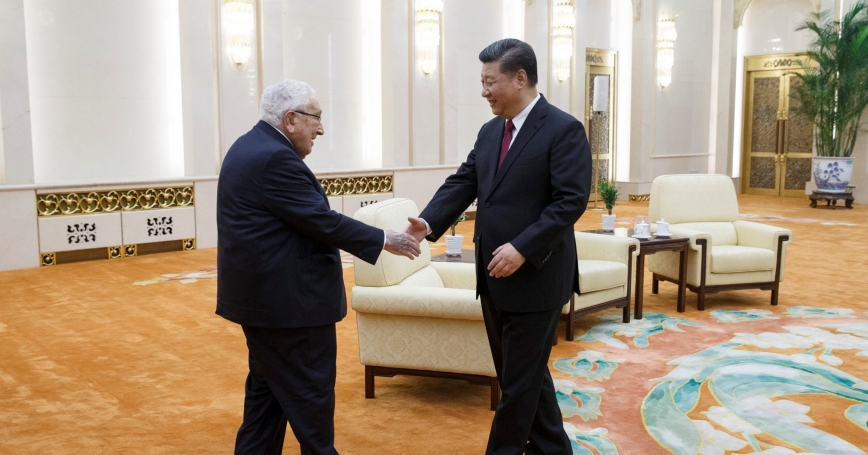 by James Dobbins and Ali Wyne

With trade talks between the United States and China slated for January, Washington's longstanding hope that Beijing's growing integration into the world economy would temper its illiberalism at home and produce a “responsible stakeholder” abroad has faltered.

While the two countries shared until recently an encouraging, if abstract, commitment to achieving a “new model of great-power relations,” they now make little effort to conceal their growing distrust of one another.

There is a growing consensus within the U.S. foreign policy establishment that the United States is engaged in a long-term, intensifying strategic competition with China.

Less clear, though, is what ultimate relationship the United States should seek and can plausibly achieve with its resurgent competitor. One reason for that uncertainty is the difficulty of determining where to place China along the ally-to-adversary continuum.

The two countries did $635 billion in trade last year and are additionally bound together by a complex network of global supply chains. China accounts for roughly a third of all international students who are enrolled in U.S. colleges and universities, and initiatives such as the Schwarzman Scholars program are allowing future U.S. leaders to study in China.

By contrast, there was little in the way of economic, cultural or people-to-people exchanges between Washington and Moscow during the Cold War.

An inability to classify China precisely limits, if not precludes, America's ability to formulate a coherent strategy because it leaves open potential end states ranging all the way from cooperative coevolution to armed conflict.

An inability to classify China precisely limits, if not precludes, America's ability to formulate a coherent strategy.

It is telling, observes the Atlantic Monthly's Uri Friedman, that ambiguity about the path forward extends even to perhaps the most prominent advocate of a more confrontational approach toward China, the president himself:

“Sometimes it seems as if he's hunkering down in the trenches for a prolonged economic cold war, other times as if he's prepared to call the whole thing off and resume being best friends with Xi if the two sides can strike a deal.”

One goal that President Trump has consistently articulated is righting the U.S. trade balance with China (Washington recorded its largest-ever deficit with Beijing this October, $43.1 billion).

Even if achieved, though, a reduction in that figure would do little to narrow the disparity between U.S. and Chinese growth rates or forestall the day when China matches or even surpasses the United States in most benchmarks of national power.

While it may be tempting to employ tariffs and other trade restrictions to hobble China, such measures will also cut the U.S. growth rate—no matter how China chooses to retaliate—not only because Washington and Beijing are highly economically interdependent, but also because the latter is the most important motor of global growth.

This type of beggar-thy-neighbor tack is, therefore, unsustainable. In any case, the most important gauge of U.S.-China competition is not the bilateral trade balance but comparative success in developing markets.

While the United States has taken some encouraging steps to strengthen its geoeconomic posture—most recently standing up an agency, the International Development Finance Corporation, that has twice the budget cap of its predecessor, the Overseas Private Investment Corporation, and is permitted to invest in debt as well as equity—it does not have a cohesive plan to compete in this domain.

The Trump administration's focus on securing bilateral trade deals and balancing trade flows one country at a time is unlikely to stem or even keep pace with the growth of Chinese influence. Nor will efforts to compel middle countries to “choose” Washington or Beijing.

The Trump administration's focus on securing bilateral trade deals and balancing trade flows one country at a time is unlikely to stem or even keep pace with the growth of Chinese influence.

Both supporters and critics of the administration's China policy agree that Washington will be unable to compete with Beijing over the long run or spur it to undertake market-oriented reforms unless it enlists a broad coalition of powerful economies in its efforts.

The United States could leverage multilateral arrangements to expand its access to third markets, strengthen international norms surrounding trade and investment and incentivize China to adhere to those norms by collaborating when it does and mobilizing concerted international pressure when it does not.

The United States also could renew its internal sources of competitiveness, especially the ecosystem of innovation that has long enabled it to be at the forefront of developing and harnessing frontier technologies.

U.S. observers increasingly depict engagement and competition as alternative policy approaches to China. Yet both remain essential instruments: the former, to continue building avenues of collaboration in sustaining an open system of trade, slowing the progression of climate change and addressing other pressing global challenges; the latter, to marshal collective action against unfair Chinese economic practices and assure America's partners and allies of its economic resilience and enduring strategic commitment to the Asia-Pacific region.

Ultimately, though, there is only so much that the United States can—or should attempt to—do to prevent China's emergence as a potential peer. It should aim not to “out-China” China but instead become a more dynamic version of its best self.

James Dobbins is a senior fellow and Ali Wyne is a policy analyst at the nonprofit, nonpartisan RAND Corporation.

This commentary originally appeared on The Hill on December 30, 2018. Commentary gives RAND researchers a platform to convey insights based on their professional expertise and often on their peer-reviewed research and analysis.