For One Syrian Refugee, the Research Strikes Close to Home 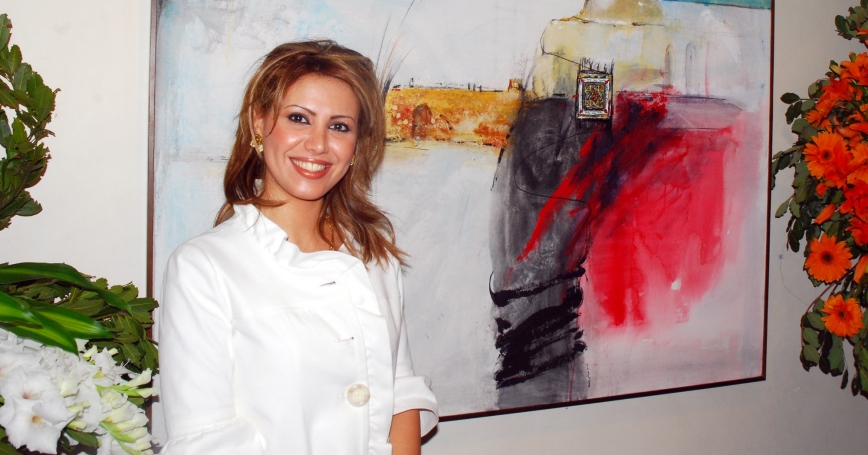 Fadia Afashe showing her work at an art gallery in Damascus, Syria, April, 2009

When I came to the United States to study public policy in 2011, I had every intention of eventually going home to Syria. But when my fellowship at the University of Minnesota ended a year later, the possibility of returning to my home country had vanished. The civil war and unrest in Syria made sure of that. Suddenly and unexpectedly, I became a refugee.

Being a new refugee means being in constant crisis. Everything is unfamiliar, and the journey is isolating. For almost two years I was stateless, jobless, hopeless. It really was a struggle to survive. Eventually, I secured a work permit and something even more crucial—a series of jobs that came along with it.

Somewhere in the world, about one person every two seconds is displaced as a result of conflict or persecution. Since the civil war began in 2011, nearly two-thirds of Syria's population—12 million people—have been forced to flee and relocate within Syria or live in other lands. In fact, the number of displaced people is at its highest level ever, even surpassing displacement during World War II. With the U.S. pulling troops out of Syria, and the country far from rebuilt, home and stability may seem even further away to Syrian refugees.

Despite my background in criminal law and public policy, I spent a couple years in a series of low-level jobs in the United States until, in 2016, I joined the RAND Corporation, a research institution based in Santa Monica, California.

I am a success story—a refugee able to build a productive new life in a host country. I have even been able to use my language skills and background as a refugee to help conduct research aimed at understanding and elevating the refugee experience.

Through my work at RAND, I have regained a sense of purpose. In Syria, I devoted a great deal of time to fighting for women's rights, even producing a short film exposing how laws regarding rape in the Arab world leave women unprotected and disenfranchised. But as a refugee in the U.S., I had to watch my country collapse with no power to help my family and the many friends I left behind. My new work has given me a chance to once again make a difference.

As a Syrian refugee living in the United States, I am an anomaly. Fewer than 80,000 Syrian refugees live in North America. More than 6 million Syrians are displaced within the borders of their country, and more than 5 million others have taken refuge in the neighboring countries of Turkey, Jordan and Lebanon.

My colleagues and I recently studied how that trio of Middle Eastern host countries with fragile economies might better help refugees find their economic footings—while ensuring each country's economic stability. Many Syrians we surveyed said they want to work but could find only low-wage employment, according to our survey of 1,800 refugee households and 36 focus groups composed of refugees and host-country citizens.

Among the report's recommendations: Train refugees for middle-skill jobs—those requiring education beyond high school but less than a four-year college degree—that are in demand across all three country's economies. Increase job-matching services. And incentivize refugees to relocate within a country to where the jobs are.

One recommendation from the report struck especially close to home for me. More could be done to improve the refugees' access to work permits and legal work. In the beginning, I could not secure a job that dovetailed with my experience until the U.S. granted me permanent residency. For far too long, I had no way to pay the bills.

In our focus groups, we found a firefighter working as a tailor, a chemist who was a mechanic, an information technology specialist who did odd jobs. They need the money, a Syrian refugee in Lebanon said, so they will take any jobs in order to survive. In that remark, I saw myself. I know there is no such thing as an odd job for a refugee.

I always worried that refugees were not truly welcome or accepted in the countries that take them in. But our research found otherwise. Despite facing some resentment in the workplace, refugees said they felt respected on the job and did not experience day-to-day discrimination. They were viewed as hard workers.

Respect is a precious commodity, as refugees know all too well. Seemingly against all odds the refugees in our study were able to see light in a dark time of their lives. In turn, working on this refugee research project gave me back something dear that I thought I had lost forever—hope.

Fadia Afashe is a production editor at the nonprofit, nonpartisan RAND Corporation.

This commentary originally appeared on USA Today on December 21, 2018. Commentary gives RAND researchers a platform to convey insights based on their professional expertise and often on their peer-reviewed research and analysis.