The UK Can't Have Its Brexit Cake and Eat It Too 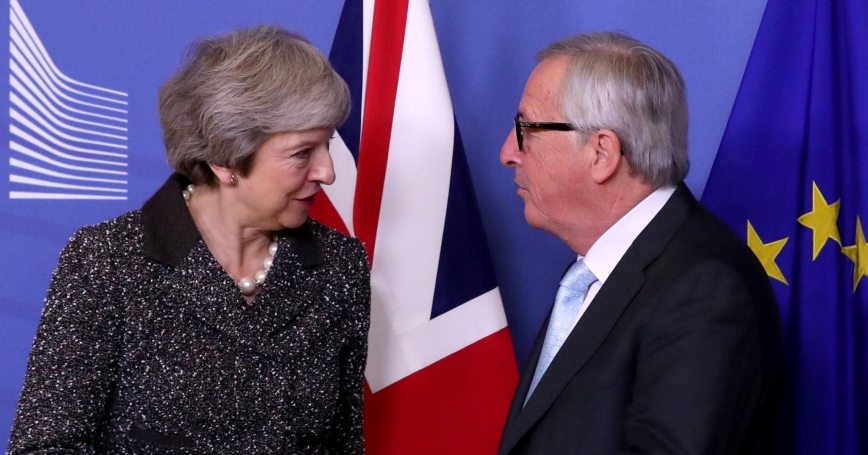 The British Parliament vote on whether to agree to negotiated terms for leaving the European Union, the “Brexit” they chose in a referendum in 2016, has been delayed and the U.K.-EU withdrawal deal as negotiated could be in jeopardy.

If it is voted down by Parliament or is otherwise scrapped, what would come next for Britain and what are American interests in the outcome?

The deal British Prime Minister Theresa May and the European Union crafted envisaged the U.K. leaving the EU, but—as a “backstop” for an indefinite period—remaining within a customs union applying EU tariffs, maintaining regulatory alignment with the EU and making substantial payments to the EU for the privilege.

This arrangement would protect peace in Ireland by preserving an open border between the U.K.'s Northern Ireland and the Republic of Ireland. But lingering within a customs union with the EU would mean Britain could not reach free trade deals with other countries, such as the U.S.

These realities have now become clear. There is no “have your cake and eat it too” solution for Britain. That is what is riling the British political scene.

If it wishes to be free to negotiate free-trade deals around the world, it has to either rebuild a border in Ireland, putting at risk the Good Friday peace accord, or put up a customs border between Northern Ireland and the rest of the U.K., which is equally unpalatable to the British citizens of Northern Ireland.

If it crashes out of the EU with no agreement at all, the economic costs are the highest of all, and border chaos is likely.

Whatever Britain's political sovereignty aspirations, its economic future is tied to Europe. The U.K.'s most important trading partners are the other 27 members of the European Union.

If the U.K. crashes out of the EU with no agreement at all, the economic costs are the highest of all, and border chaos is likely.

The manufacturing sector, the health of which is key to improving the future of those left-behind by globalization, depends on just-in-time parts trade with the EU. And the EU has more heft to negotiate free-trade deals elsewhere in the world with partners such as the U.S., Canada, Japan, Korea and Australia than the U.K. would have alone.

What happens now? If the current Brexit deal is not viable, London may ask the EU to renegotiate, but a significantly better exit deal is probably not possible, as the EU is determined to protect the open border in Ireland and the Good Friday peace deal.

If a vote of confidence topples the May government, a general election would follow, but if Labour wins, it promises nationalizations and other dramatic economic policy changes not attractive to the Tories.

Alternatively, some propose to re-run a referendum in Britain on whether to leave the EU at all, now dubbed by advocates a “People's Vote.”

To make a referendum possible would likely require the EU to extend the timetable for the U.K.'s exit beyond March 29, when it otherwise will be out of the EU, even if nothing is agreed.

If a vote comes down in favor of continued EU membership, the Irish and economic challenges would go away, but Brexiters would feel cheated and would roil British politics for a generation. If a People's Vote confirmed the earlier vote for Brexit, the U.K. would face the same unpalatable choices it has now.

What are U.S. interests in this dramatic confrontation? A RAND study demonstrated that the economic stakes for Americans are not high. The U.K. alone is a relatively small market, and its upside potential is mainly in services trade, largely unaffected by tariffs or trade barrier regimes.

But the vision for the EU that Britain always advocated—a U.K.-EU union that brought Central European countries into the West, worked with the North Atlantic Treaty Organization and took responsibilities globally—was the U.S. vision too.

If the U.K. should leave the EU, the U.S. could miss the pragmatic British voice in Brussels, and the resulting economic upheaval in Europe could put at risk the stability and strength of the West more broadly.

Charles Ries is the vice president, international, at the nonprofit, nonpartisan RAND Corporation. He oversaw economic sections at U.S. Embassy London and the U.S. Mission to the European Union, served as U.S. ambassador to Greece (2004–2007), and principal deputy assistant secretary of state for European Affairs (2000–2004).

This commentary originally appeared on The Hill on December 11, 2018. Commentary gives RAND researchers a platform to convey insights based on their professional expertise and often on their peer-reviewed research and analysis.