Confusion Over the U.S. Withdrawal from Syria 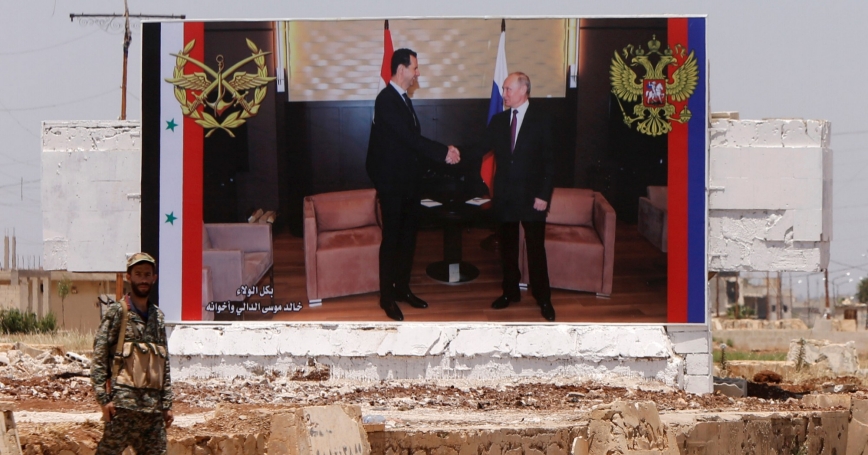 A soldier stands guard near a poster of Syria's President Bashar al Assad and his Russian counterpart Vladimir Putin in Rastan, Syria, June 6, 2018

The Trump administration has begun to roll back the president's announced pullout from Syria. On Dec. 19 Trump said Islamic State had been defeated; his officials now acknowledge not entirely. Trump originally ordered a withdrawal within 30 days, then administration officials said it would take four months, and more recently they announced that there is as yet no fixed timetable. The departure was originally unconditioned, now it is explicitly conditioned on receiving assurances from Turkey regarding their treatment of the Syrian Kurds—a demand that caused Turkish President Recep Tayyip Erdogan to snub National Security Adviser John Bolton during Bolton's Tuesday visit to Ankara.

Despite tension with Ankara, these evolutions are all in the right direction, recognizing that the anti-IS campaign is not entirely over and that the United States has residual obligations to its main partners in that fight, the Syrian Kurds. The change in strategy is also evidence of serious disarray within the administration as officials at all levels struggle to carry out what appear to be ill-prepared instructions and unrealistic policies.

Confusion over Syrian policy preceded the president's withdrawal announcement. Trump has said that he had earlier given the Pentagon a firm deadline for withdrawal and had refused to extend it. Yet in the weeks leading up to his December announcement, Bolton and his top Syrian envoy, James Jeffrey, publicly maintained that American forces would remain in Syria as long as Iranian forces and proxies did, which is to say indefinitely. So either the president had not given clear instructions, or his principal advisers did not take his guidance seriously. Either explanation would be cause for concern.

In their Dec. 14 phone call that preceded the withdrawal announcement, Trump and Erdogan agreed that Turkey would take over the fight against residual IS elements in Syria. A glance at the map would indicate how improbable this is. IS is holed up in isolated pockets of resistance on the Iraqi border, not the Turkish border, and thousands of Kurdish fighters occupy the territory in between. Geography makes clear that any future anti-IS campaign in the Euphrates River valley would likely be conducted by the Kurds, or the Damascus regime and its Russian and Iranian allies. The Kurds can conduct this fight only if they are not attacked by the Turks and if they continue to benefit from American equipment and air support, which probably requires at least a few American forward observers on the ground. Having the Syrian government occupy this area would be a lot less desirable, but better than leaving IS undisturbed.

Washington's attitude toward the regime in Damascus also warrants review. Syrian President Bashar al-Assad is a serial war criminal, but the United States has previously talked with other leaders in that category, such as Serbia's Slobodan Milosevic and Libya's Muammar Gaddafi. Iran will never leave Syria entirely, but its presence will diminish as the civil war winds down. Ending that war and offering the prospect of international reconstruction assistance could provide the best means of eventually reducing Iranian influence. America's Gulf allies are beginning to make their peace with Assad in order to better compete with Iran for influence there. European governments are also becoming restive and in the wake of the most recent shifts in U.S. policy, less likely to follow Washington's lead. Washington's strategy, under Obama as well as Trump, has been to “impose costs” on the government in Damascus by diplomatic ostracism and economic sanctions. This punitive approach is morally satisfying and politically expedient, but as a practical matter it just helps perpetuate the conflict and sustain Assad's dependency on Iran.

James Dobbins is a senior fellow at the nonprofit, nonpartisan RAND Corporation and a former U.S. assistant secretary of state.

This commentary originally appeared on Reuters on January 8, 2019. Commentary gives RAND researchers a platform to convey insights based on their professional expertise and often on their peer-reviewed research and analysis.