Behind the 'Surprise' Resignation of Iran's Foreign Minister 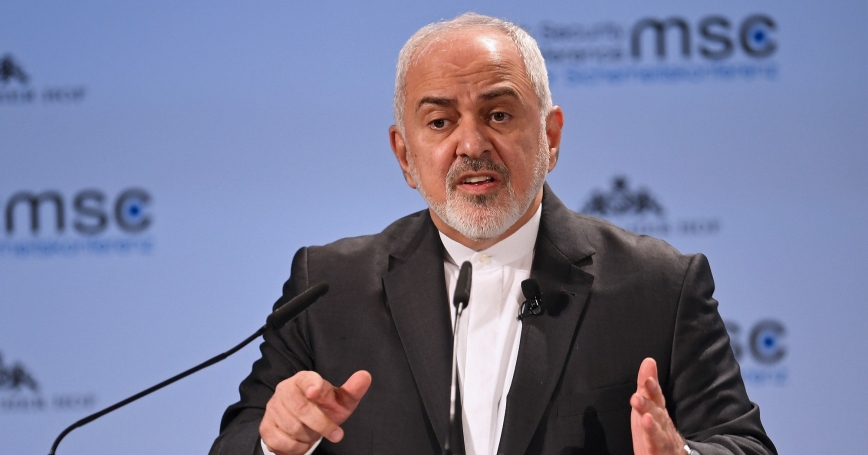 This week, Mohammad Javad Zarif, Iran's foreign minister, announced that he was resigning from his post after a nearly six-year tenure. During this time, Zarif has become one of the most visible and recognized Iranian politicians at home and abroad—a fact that helped him secure his landmark foreign-policy achievement, the Joint Comprehensive Plan of Action (JCPOA), in 2015. But that nuclear deal also precipitated his fall from favor with Iranian hard-liners and his ultimate resignation. It's unclear whether Zarif will truly leave the Iranian diplomatic corps or if the supreme leader, Ayatollah Ali Khamenei, and the president, Hassan Rouhani, will compel him to stay. But the announcement highlights the regime's infighting and could be a sign of intensified turmoil during Rouhani's final two years in office.

Zarif's seemingly abrupt resignation may have taken Iranians and foreign observers alike by surprise, but the foreign minister was already contemplating leaving the government toward the end of Rouhani's first term in the spring of 2016. At that time, Zarif indicated that the mounting pressure on his team was becoming overbearing.

Still, despite a great deal of pressure from hard-liners who rejected the JCPOA, Zarif and his signature achievement enjoyed backing from the public and key power centers. The nuclear deal was by no means perfect, as Khamenei and the powerful commanders of the Islamic Revolutionary Guard Corps often noted, but even they had accepted the agreement. With the deal's promised sanctions relief slow to come, however, Khamenei soon became more overtly critical. He began signaling to hard-liners that he would no longer shield Zarif and his team from their disparagement. Zarif, still popular with the public, turned his attention to normalizing Tehran's international status and the country's economic relations.

The election of Donald Trump to the U.S. presidency in November 2016 was a wild card. On the campaign trail, the Republican businessman had criticized the nuclear deal and pledged to undo it once elected. Yet, in conversations I had with Zarif's team, they said they thought that Trump would be more open to negotiating with Iran compared with the Democratic nominee, former Secretary of State Hillary Clinton. Soon after Trump took office, though, it became clear the JCPOA's fate in Washington could be in peril. On May 8, 2018, Trump announced the U.S. withdrawal from the agreement. Hard-liners seized the opportunity to double their attacks on Zarif and his team. A group of traitors, they warned, had sacrificed national interests to America.

At the same time, Iran's moderates, led by Rouhani, fixed their eyes on Europe: After all, many argued, they never expected the United States to fully mend ties with Iran, nor did they wish to pursue full normalization. They had just hoped for greater economic (and political ties) with Europe. The U.S. withdrawal provided an additional lever in their talks with the Europeans who wished to sustain the JCPOA.

However, a number of internal challenges posed obstacles to Iran's economic recovery and greater trade and business ties with Europe, including economic mismanagement and corruption—which Rouhani vowed to fix. As part of these efforts, his moderates sought to pass legislation to meet transparency standards set by the Financial Action Task Force—an intergovernmental body whose objective is to combat money laundering and terrorism financing. Zarif strongly advocated for this move in a heated internal debate and bargaining game, which hard-liners saw as yet another major concession by the foreign minister. As the hard-liners saw it, the JCPOA had demonstrated America's unreliability and a weak pro-U.S. Zarif was failing to learn this lesson.

Zarif made many uneasy appearances before the Iranian parliament. He was at times belligerent. He seemed more at ease talking to his Western counterparts and appearing at think tank events in the United States than he was among his revolutionary peers. Such behavior only exacerbated tensions and distrust between the U.S.-educated minister and hard-liners at home.

Even his resignation provided fodder for conspiracy theories, with some hard-line social media accounts pointing out the coincidence between Zarif's resignation and Bashar al-Assad's visit to Tehran—where the Syrian president met with both Khamenei and Rouhani. The high-profile visit was meant to cement the Assad regime's victory in effectively crushing the opposition in Syria following the U.S. announcement that it would withdraw its troops from the area. The photo ops were designed to showcase the two allies' ties and firmly highlight Iran's place as the Syrian regime's top backer. Zarif wasn't invited to the meetings, yet another indication that his political capital—which he had largely spent on securing and sustaining the JCPOA—had nearly dissipated. His resignation cast a shadow on the event as international attention turned to him.

Unsurprisingly, the response to Zarif's resignation has been divided, and key players have yet to comment. It remains to be seen if the regime will accept the resignation. Regardless, the announcement has a few implications for U.S. decision-makers. Most importantly, many will wonder what Zarif's potential departure may mean for the JCPOA. Although the agreement will certainly lose its biggest and most effective backer in Iran, for now its future is likely to remain unaffected. Khamenei and key power centers in Iran still have an incentive to continue implementing the agreement—even as they prepare for its possible collapse and, possibly, even plan to test its limits.

Taking a longer view, Tehran is likely to await the end of Trump's first term to gain a better sense of who will be in charge in the United States before making any decision. But European engagement efforts with Iran are likely to suffer since the personal ties between Zarif and key European figures may evaporate. In Iran, hard-liners may view Zarif's resignation as a capitulation and see the development as a sign of their newfound power—which could help propel them into leadership positions during the 2020 parliamentary elections and the ensuing presidential elections in 2021. They may also see this development as an opportunity to reset their country's foreign policy by leveraging Zarif's departure to extract more concessions from Europe. They may be disappointed, however, if Zarif is replaced with someone on his team (or his resignation rejected).

So far, Zarif's resignation has sparked as much controversy as his tenure, one dominated by overtures to the West and resulting tensions at home. Although the effects of his departure will likely be felt most acutely in Brussels and key European capitals, it may have a deeper impact in Tehran, as it hands one of the first major victories following America's withdrawal from the JCPOA to the Iranian hard-liners.

This commentary originally appeared on Foreign Policy on February 26, 2019. Commentary gives RAND researchers a platform to convey insights based on their professional expertise and often on their peer-reviewed research and analysis.